Our 10 Favorite Songs Released By San Antonio Artists in 2017

Damn, it's been a crazy year. So many shows, so many events, so many artists putting out dope work. Y'all really stepped it up this year San Antonio, we see you out here! While there's just not enough time to write about all the amazing songs you beautiful folks released, here's 10 (not in any particular order) that really stayed with us through the entire year. And look, 2017 isn't done yet, but we're pretty stoked to see what you got for us next year. Until then, vibe with us to these hometown jams.

When Chris Maddin releases music, you should pay attention. The frontman to numerous musical projects in San Antonio’s past and present, Maddin’s “Stuck In Edit” sounds like it was written with the intention of pumping all of the artist’s seasoned musical experience into a single song. It’s spacey, rich in layers and just a clear example of Maddin's crazy genius.

Even though Pinko’s “Samo isn’t dead” is full of distorted guitar riffs and thundering drum hits, the track is actually quite dancey.  You may even find yourself moving your hips to the groove-heavy guitar riffing of frontman Guillermo Mendez as he sings, shouts and screams throughout the two minutes and seven seconds of rock and roll frenzy.

Like gliding through a dream about surfing California waves, Elnuh's "May 2 June" is a echoey, psychedelic, indie rock gem that's more laid back then a afternoon nap in in July. Fronted by Elena Lopez, who's played in a number of projects including Octahedron and Baby Bangs, Elnuh is described as the kind of music Lopez writes in the middle of the night when she can't fall asleep. Pretty appropriate, if you ask us.

Transcending the conceptual art/dance world to the music arena with their debut EP Bonfires of Urbanity, House of Kenzo hasn't skipped a beat since bursting on the scene nearly 2 years ago. From official South By Southwest showcases to their steady regiment of club performances across Texas, including an incredible show at Day For Night Fest in Houston, House of Kenzo is proving to be a force that demands attention from on-lookers and passerby's. Punctuated by sounds of breaking glass and machine-gun drum beats, "Melania Carry" sounds like what might be playing at a club in a post–apocalyptic future ... you know, the one we're in.

Soulful, surfy, bouncy and poppy,  Booty Feet's new track "Cabrera" is the kind of song that shows up on the opening scene of a high school movie about the last day of school.  For a band that's not even a year old yet, the subtle details to their song-writing set this band apart from other indie rock bands that have been doing it way longer.

What's most noticeable on Femina X’s “Black Tongue,” besides frontwoman Daniela Rioja’s feather-light vocals, is guitarist Alex Scheel’s guitar. It's almost as if he’s imitating a bird or some sort of jungle creature with his tremolo picking, which adds perfectly to the group's tribal vibe. 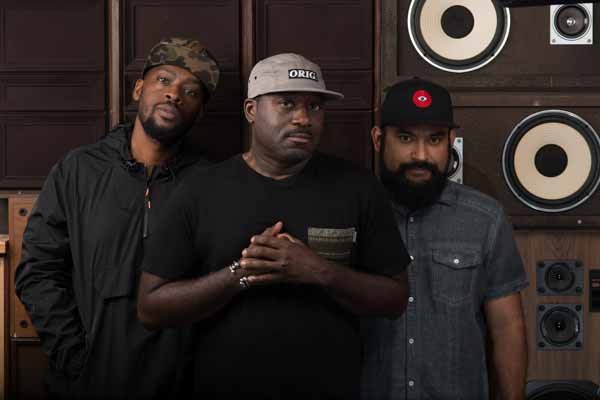 Third Root
“Justice or Else”

Arguably one of the best local hip-hop tracks to ever emerge from the 2-10, Third Root’s “Justice or Else” is the type of song you listen to riding the bus or train (if we had one) looking out the window at the people in your city. It’s got that vibe that makes you want to nod your head but also think about the change you’d like to see in the city. Conscious hip-hop to the fullest.

If you haven’t seen Carlton Zeus’ live show, you’re really missing out on one of the most entertaining acts residing in SA. If you happen to catch him (he doesn’t actually play in SA as often), you’ll be sure to hear the track “Necio Cumbia” off the album Three Strikes You’re In released earlier this year.

Nothing More
"Go To War"

When your band secures three Grammy’s for the music y’all write, chances are your shit’s decent and deserves a listen. For those who don’t know, San Antonio’s Nothing More did just that and two of the three Grammy nominations they garnered were actually for this particular song “Go To War” – Best Rock Performance and Best Rock Song. Not too shabby for a band from the Alamo City.

Shaping The Legacy
"A Future Divided"

Punctuated with oodles of electric guitar tapping and drums so tight you’d think they were computer programmed, Shaping The Legacy are probably the closest thing to the rapid-fire staccato guitar jabbing of “djent” our town has seen out of a local band, especially on “A Future Divided” from their 2017 album Colors of Infinity. It’s not a surprise the track sits at 167 thousand plays on Spotify, and it’s not all just technicality for technicality sake. While those who do enjoy the insane polyrhythms crisscrossing throughout the track, the song has enough pop aesthetic to appeal to wide range of rockers.