San Antonio is Officially a "Music Friendly Community." What Does That Mean? 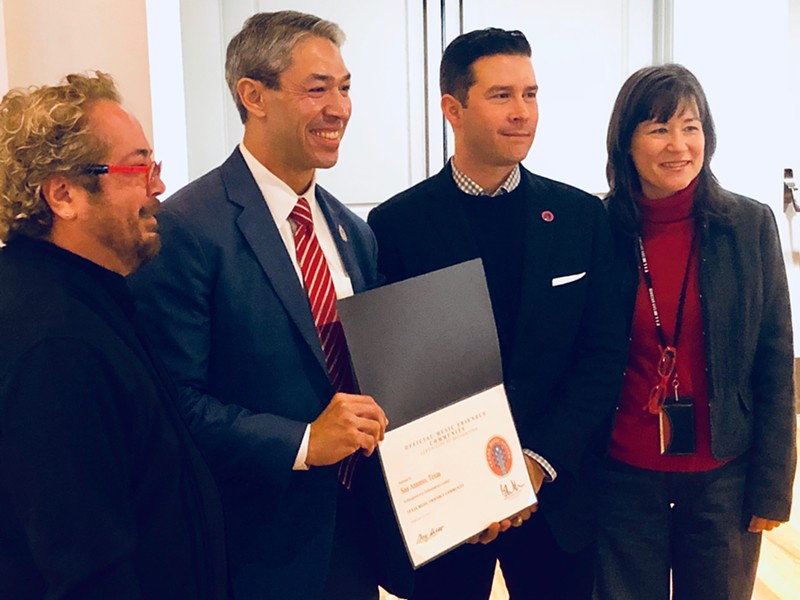 “As a city celebrating its Tricentennial year, San Antonio has a long history of being the home to incredible world-class talent, especially in music of all genres,” Nirenberg said. “Today is a celebration of where we’ve already been as a music city, where we’re going, and how the City of San Antonio’s recognizes that music is an important industry to support and help grow.”

San Antonio is the fourth city in the state, joining Fort Worth, Austin and Denton, to be designated as a “Music Friendly Community” by the Texas Music Office, a division in the governor's office. According to a press release from the city, the TMO developed this program to address needs and highlight opportunities in each city's local music industry, share information between TMO and other music friendly communities and then figure out how to best market each city’s musical offerings to the rest of the world. Dallas and Lubbock are also cities pursuing this certification.

In 2016, the San Antonio City Council adopted its 2017 budget, including funds designated for local music advocates San Antonio Sound Garden to conduct a study of San Antonio’s music industry, to basically see what it would take to strengthen and grow our music economy and make it attractive to industry professionals outside of the city and how much work we needed to do to get there.

The city’s music committee, which is made up of 11 members that represent all different segments of the music industry in San Antonio including music educators, venue workers, production company team members, worked with San Antonio Sound Garden and the TMO during this study to help get San Antonio certified as a Music Friendly Community. Certification from the office would ideally help build a network for fostering music industry development, and send a clear message to industry professionals that “certified” communities are serious about attracting and developing music industry growth.

“The City of San Antonio and its Department of Arts and Culture have showcased significant dedication to promoting, supporting and growing the city’s music industry,” said TMO Director Brendon Anthony. “This new designation connects San Antonio with an information sharing network of other Texas communities that are focused on the music economy and we look forward to working alongside city leaders to move the local industry forward.”

It’s still a little unclear exactly what all this means for San Antonio, but over the next few months, the Department of Arts & Culture and the San Antonio Arts Commission’s Music Committee will work with the TMO and the local community to develop a so-called "Music Strategic Plan" for the city of San Antonio. The plan is expected to be completed for presentation to city council in June 2018.