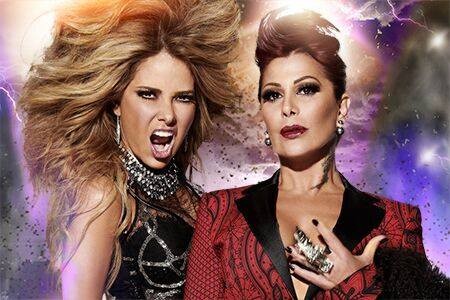 Two of the biggest Latin pop stars of all time – Gloria Trevi and Alejandra Guzmán – announced the final leg of their Versus World Tour in January, which will wrap up in North America this spring. Back in 2000 Trevi was arrested for “corrupting minors” (the singer had been accused of recruiting adolescent girls for live-in musical training that included sex with her manager, producer and ex-husband, Sergio Andrade) for which she served four years and eight months in prison, but was released and cleared of all charges, due to lack of evidence. Guzmán is the daughter of revered Mexican actress, producer and politician Silvia Pinal and Enrique Guzmán, who is considered as one of the pioneers of rock ‘n’ roll in Mexico. Regardless of the controversy and famous parents, Trevi and Guzmán are undoubtedly two of the most representative icons in Spanish-language music. From pop-punk/rock chingonas to pop stars, they’ve influenced generations with their music, style, ideology, and performances, cementing themselves as some of the most transcendental and successful creators and exponents of Mexican pop/rock.