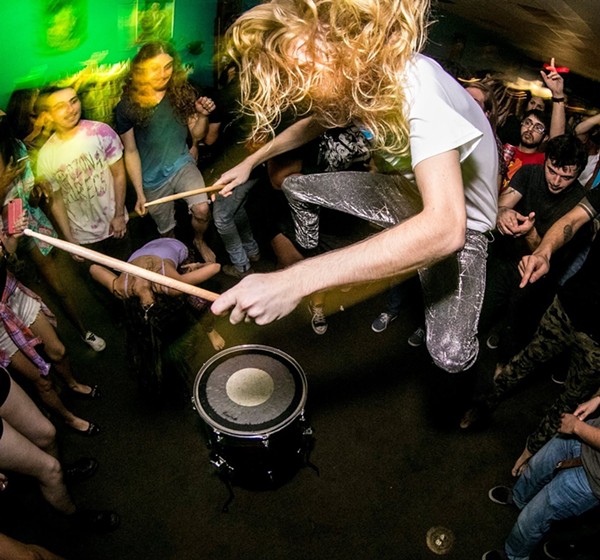 If you checked out our story about the music economy and struggle of the working musician in this week’s issue (it’s on the cover – peep that shit), then you know there’s PLENTY of artists here in SA gigging consistently and, in the words of Iggy Pop (who’s actually a Fea fan), kicking out the jams.

On top of covering local artists with profiles and album reviews, at least once or twice a year we love to compile playlists of new music from local artists. That way the community can hear new stuff and go out and support these artists if they dig it.

Here's 10 new songs from SA artists that we think are pretty fucking dope.

Blending a balanced mix of dark wave, post punk and industrial Filthy’s “Fault in Tolerance” is the first track off the trio’s anticipated new EP of the same name. It’s dark, emotive and a healthy reflection of SA’s deep industrial roots.

In typical Elnuh fashion, “Shame” is a poppy, sad indie track that pulls listeners through a dreamy soundscape of reverb and Elena Lopez’ whispering vocals. It’s perfect if you have a hard time getting tired at night. Put this on and get lulled to a shimmery sleep.

Crawl – “At The Forge of Hate”

If you’re not familiar with SA’s solo dungeon sludge metal artist Crawl, it’s time you tip toe into the depths of his doomy music. An atmospheric assault of layered dissonant tones, Crawl’s “At The Forge of Hate” – from the recent split EP with fellow doomster Leviathan – pummels listeners with slow pounding drums while echoing distortion and synths fall like impending tidal waves.

What people should appreciate about honky-tonk revivalist Garrett T. Capps, is that while the songs he writes aren’t the most technical, there’s magic in the simplicity of his work – which is often harder than just shredding through a 4-minute track. On “Baby Please,” from the artist’s forthcoming full length In the Shadows (Again), Capps demonstrates his ability to write music that any fan of indie rock, Americana, blues or country could appreciate.

'90s alt rock vocal melodies match 2000s indie tones, lofi-garage textures, and hip-hop beats for a mix that makes me think these guys couldn’t decide what sound to go for, so they picked all of them and it somehow works. Not exactly sure what genre this is, but it’s fucking dope.

Easily one of our favorite local MCs, Spy MC’s ability to tell a story through his rhymes is evident especially on his newest track “Matter.” The song is also a shining demonstration of the rapper's technical cadences that wraps around the beat with precision and confidence.

Emotive but still bumping, Samurai Sai’s track “Sober” is an introspective look at some of the decisions the rapper’s been making as of late. It’s a refreshing refrain from the mindless tidal wave of soundcloud rapper monotony all while demonstrating the artist’s lyrical abilities.

Goddamn does this song bang. Rapper, producer and multi-instrumentalist Dillon O’Con caught our attention last year with his EP and full length album, but has returned with "Don", which definitely has a Kendrick Lamar vibe, yet remains very much the artist’s. Stop sleeping on this dude.

Oh shiiiiiiiiiiiiiiiiit! New V-tude is something to be excitied about. Despite how young this trio is, this prog/rock/indie/weirdo/psych outfit has been performing longer than most of the bands gigging on the strip. The opening track “Melting Marshmallows,” from the group’s brand new self-titled EP is a prime example of how much these folks have grown. The band makes you wait for it (and by it I mean the psychedelic glory that comes along with their entire catalog) with several build ups before carrying listeners through sleepy fields of reverb before rocketing into a plane of heavy, distorted guitar and bass.

Nahaya – “At Work with Fire”

If technical metal with drumming as precise as a surgeon and moments that will want to bang your head at your office (I may not or may not be completely rocking out at the office right now), is your thing, prog/technical/metalcore outfit Nahaya’s latest single “At Work with Your Fire” is dose of heavy missing from your life.