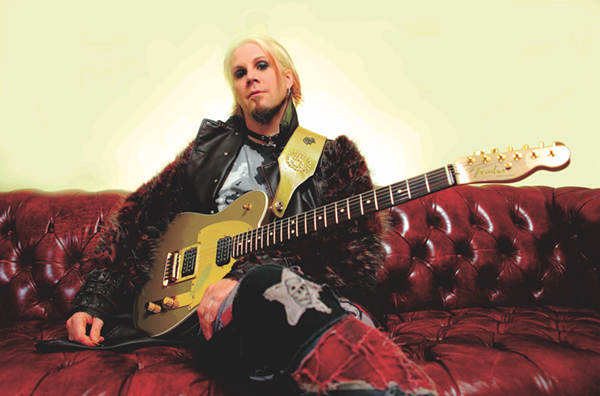 Marilyn Manson is pretty well known for being a complete asshole to bandmates and artists on tour with him. There’s an infamous 2003 video of former Manson guitarist John William Lowery, better known as John 5, throwing down his guitar on stage and pushing the Antichrist Superstar after he kicks Lowery in the chest during a live performance of “The Beautiful People.” A year after that sort-of sad, slightly-funny scene, the two parted ways.
Since departing Marilyn Manson, Lowery has found a home in another spooky frontman’s band, Rob Zombie, where he’s played guitar since 2006. On top of contributing to the rock-star-slash-horror-director’s band, Lowery has also released an impressive seven instrumental albums of solo work, which at points sort of sounds like a revamped Steve Vai (who actually appears on a John 5’s track “Perineum”), a sort of prog-rocky nu-metal punctuated by intense guitar solos. On tour in support of his most recent instrumental solo album Season of The Witch, Lowery proves he doesn’t necessarily need a scary frontman to rock a dope show.