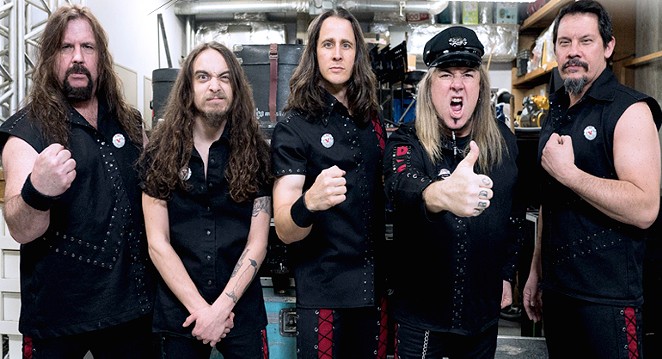 Some bands talk about making big plans while others just get shit done. In the case of the latter, let's talk about Riot V.

After releasing its well-reviewed Armor of Light album in April, the San Antonio-connected power metal outfit is storming stages from London to Lubljana, Slovenia, this summer and fall. Along the way, it's got stops at festivals including Japan's Metal Weekend and Germany's massive Wacken Open Air. And for the latter part of its trek, it's opening for European power metal stalwarts Primal Fear.

If the name Riot V sounds familiar, that's because it's the next musical chapter for Riot, a New York band that was a staple on Joe Anthony's KISS-FM in the '80s and boasted a string of San Antonio members. Current Riot V bassist and songwriter Donnie Van Stavern was also a member of seminal local band S.A. Slayer and still calls the Alamo City home.

Van Stavern added the "V" to the band name to signify that it had moved into a new era, fronted by current singer Todd Michael Hall. Over time, its sound has also evolved from the primal late-'70s hard rock of its early albums into the kind of sweeping, melodic power metal popular in mainland Europe and Japan — the band's biggest market. (Check out the video for their single "Heart of a Lion" for an example.)

"We were always pigeonholed for being the old band, but this is the new chapter," Van Stavern said. "This band has had a lot of lineup changes, but it's always continued to evolve and put out new music."

To be sure, Riot has released 16 albums over its 40-year history. What'd we say about getting shit done?
Stay on top of San Antonio news and views. Sign up for our Weekly Headlines Newsletter.