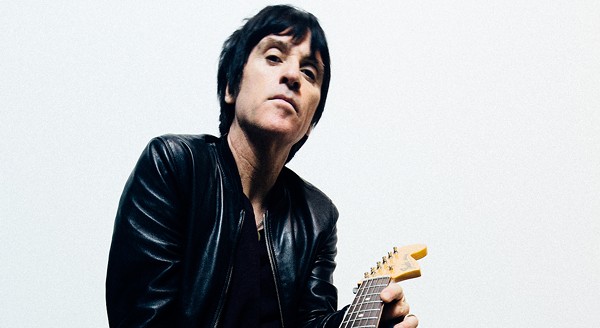 If you’d told me in 1987 (after their band, The Smiths, broke up) that I would one day rather see Johnny Marr than Morrissey in concert, I would have scoffed. Scoffed, I say! Sure, Marr wrote The Smiths' beautiful, intricate melodies, but it was Morrissey who gave them the perfect drama-queen lyrics, making you laugh and cry in equal measure. He was the soul of the band, a brilliant frontman who hogged the spotlight while Marr stayed in the background, content to jangle his guitar largely unnoticed. But we’re in the Year of Our Lord 2018, when all your faves are problematic, men are terrible (just in general, not you, dear reader) and Morrissey keeps canceling concerts and acting like an embarrassing, racist uncle. Now is your time to shine, Johnny!

And shine he did last night at Paper Tiger, before an adoring, nearly-sold out crowd. Marr is touring for his newest solo album, Call the Comet, and the setlist pulled mostly from that album. He also played a couple of songs from each of his previous solo albums, sprinkling in two hits from the early 90s band Electronic, and, of course, songs from The Smiths catalog (my personal fave was "The Headmaster Ritual").

It was obvious from the joyous response and sing-alongs that most people were
there to hear The Smiths songs, though they responded with (slightly muted)
enthusiasm to everything else Marr did.

The newer Marr solo songs were basic, which I don’t necessarily mean as an insult. They feature the strong guitar melodies that he has always employed, but without the sonic complexity and emotional heft of his earlier work with Morrissey. One exception was "New Town Velocity," which he mentioned was one of his favorites among the songs he’s written, and which sounded the most Smiths-like of anything else he played Monday night. But he's also trying out new sounds, as evidenced by "New Dominions," which was a drum-machine bop his usual guitar-driven rock.

Marr seems to be happy to look forward as well as to the past, striking rock-star guitar poses and making a couple of dad-jokes along the way. His backing band of young dudes did a capable job of supporting him and letting him shine. No hot-dogging drum solos from these guys!

And, you might be wondering… how did The Smiths songs sound? Pretty great! The music brought the recordings to life in a way Morrissey’s live versions simply cannot. That's not a dig at Morrissey – that singular guitar sound is Marr’s and Marr’s alone. And Marr adjusted his singing voice ever so slightly
to evoke Morrissey, not in a desperately imitative way, but a way that made you go, “Yes, this is the song I remember and love.” Judging by all the smooching couples and bros hugging it out during "How Soon Is Now?" it looked like most of the audience felt the same way.