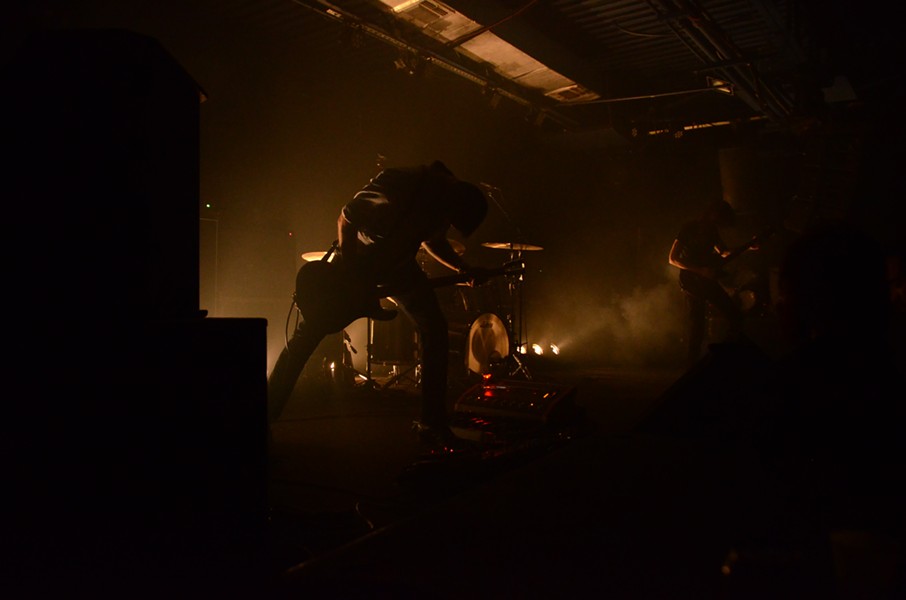 Loud-soft dynamics are easy for instrumental rock acts to overplay. Over the course of a live set, they become predictable as musicians coax quiet verses then pound through bone-jarring choruses ad infinitum.

During its Saturday gig at the Paper Tiger, Chicago-based instru-metal band Russian Circles deftly avoided that trap, proving it had a much deeper bag of tricks from which to draw.

After a sedate and appropriately lysergic opening performance from Austin's Dallas Acid, the headliners took the stage with quick waves to the audience. It was the only communication from the band during their set. They had no vocal mics and segued songs together with atmospheric peals of guitar noise.

With spotlights beaming through smoke like a battle scene from Apocalypse Now, Russian Circles tore into the opening number "Defacit," layering eerie guitar drones over an appropriately martial beat. Mid-song, the trio locked together for a series of precise, galloping riffs.

An early-set high point, "Afrika" struck a similar balance between moody atmospherics and wall-of-sound squalls before sweeping into a majestic major-key finale. Like so much of Russian Circles' work, the unconventional song structure helped the band avoid predictable OK-here-comes-the-loud-part moments.

On "Harper Lewis," bassist Brian Cook rumbled like a tractor in need of a tuneup while guitarist Mike Sullivan wove delicate staccato figures over the top. By the time the song reached its bludgeoning buildup, the audience comprised equally of hipsters and headbangers was bobbing heads in unison.

But hard-hitting drummer Dave Turncrantz proved to be Russian Circles' secret weapon of the night. No matter how much sonic space a bassist and guitarist can fill, a power trio will fall flat without the right rhythmic drive. Turncrantz showed his versatility again and again, embellishing atmospheric passages with skittering rimshots and pummeling the fuck out of the toms during crescendoes.

By the time Russian Circles closed its ten-song set, there was no need for an encore. The band had already shown the Paper Tiger just how far a band can take the limits of instrumental rock.