Sonic Illuminations: What to Expect From the Music of This Year's Luminaria

November 08, 2018 at 8:11 AM
comment
Over the years, Luminaria has consistently improved its musical offerings, working with local musicians to curate diverse lineups that represent San Antonio’s expanding horizons as well as its complex history. This year, the festival’s Curatorial Committee includes local poet, rapper, singer, songwriter and activist Andrea “Vocab” Sanderson as well as performance/sound/installation artist and educator Mark McCoin. The resulting lineup is easily one of Luminaria’s best ever. Below, we selected the seven performances we’re most excited to catch. See luminariasa.org for a full listing of performers and set times.

No stranger to the Luminaria stage, beloved San Antonio act Buttercup — a veteran art-rock/odd-pop band, for the uninitiated — has always brought aspects of the visual and performing arts to its ever-unpredictable, ever-uplifting live show. Longtime devotees of the band know that this stalwart three-piece is always quick with the surprises, those tiny miraculous bits of wonder and sharp on the execution of its emotive music. For this special performance, Buttercup will present a characteristically over-the-top performance, replete with projections, lights and confetti.

In the past few months, composer, guerilla choir director and performance visionary Nathan Felix has been more visable in the Alamo City than ever. The Austin native has garnered international attention for his use of non-traditional performance spaces and general ability to push the typically staid and/or academic boundaries of contemporary classical music. For Luminaria, Felix and his gang of co-conspirators will present The War Bride: An Interactive Headphone Opera, an ambitious project for which Felix recently won an Artist Foundation of San Antonio People’s Choice Award.

Deer Vibes
9pm Sat, Main Stage
Deer Vibes, masterminded by gifted local singer-songwriter Michael Carrillo, doesn’t play live nearly as much as it should these days. But ever since the band’s inception in 2008, it has remained one of the best-loved acts around. Therefore, any chance to catch this orchestral, cinematic-sounding indie-rock group do its thing is a can’t-miss. Plus, with three years past since the release of Deer Vibes’ last album, the excellent The Nature Of, we’re hoping to catch some new material.

Having dedicated countless hours to preserving and enlivening the traditions of conjunto and tejano music via his tireless work on the Tejano Conjunto Festival (which will be in its 38th year in 2019), Juan Tejada is also a gifted songwriter and accordionist himself. For Luminaria, he’ll take the stage with his brother Armando, who plays a mean bajo sexto, to play tracks off the pair’s upcoming release Raiz XicanX, which both showcases the versatility and honors the indigenous roots of the genre.

This local band has been wowing audiences since 2007 with its eclectic and high-energy fusion of soul, funk, hip-hop and pop. While the quartet channels influences from Outkast to George Clinton, from The Beatles to James Brown, and from Jimi Hendrix to Earth Wind and Fire, its style has, through the crucible of long hours spent honing its craft, become distinctly its own. 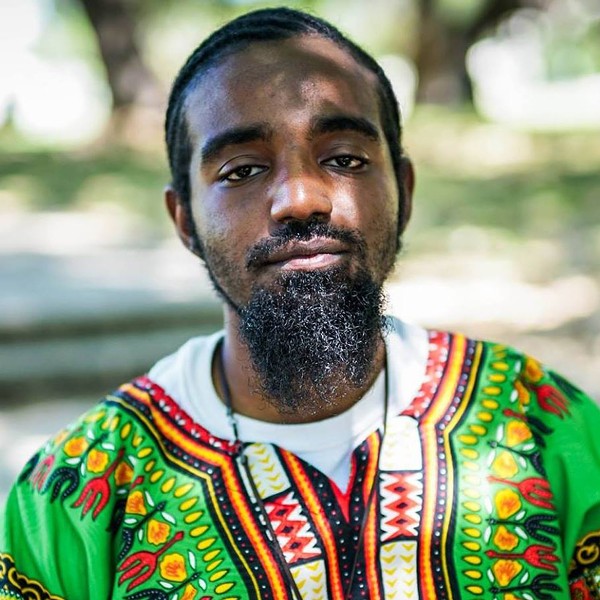 A standout talent on the San Antonio rap scene for years, Kevin Prince, stage name Mr. Composition, has recently been busy writing and promoting his first novel and putting together all-arts showcases. A special treat for Luminaria, Prince will take the stage to do what he does best: paint pictures, tell stories and challenge the audience with his penetrating flows.

Volcán
11pm Sat, Main Stage
The live experience of Volcán, a nuevo orquesta Latina that blends in bold psych-rock elements, is as kinetic as it is emotionally engaging. With 13 official members, the band always seems to be overflowing, bursting from the stage as big as its impossible sound. Not only does this explosive young act perfectly represent the cultural fusion of San Anto, but Volcán is probably the best local band doing it, in any genre, at the moment.