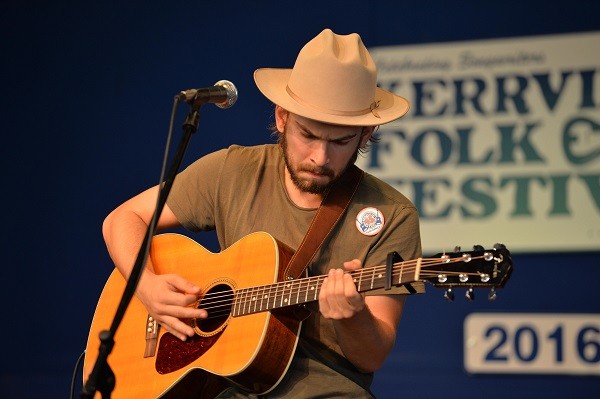 Cooper Greenberg, a San Antonio/Austin singer-songwriter and (excellent) guitarist, will drop his sophomore release December 7 and celebrate the occasion with a show the same night at the Rustic.

The album, called Dream Sequence, follows up Greenberg's promising 2016 debut EP Wave Pool. It’s a seven-song affair and his first recorded work with a full band. As such, it serves as the proper introduction to a special talent in bloom.

The songs on Dream Sequence are meticulous without seeming overwrought,
thoughtful and poignant without coming off as self-serious and lush without
devolving into stifling opulence. The lyrics are earnest and original, dealing
with the trials, tribulations and point of view that Greenberg — a 22-year-old
who graduated from the University of Texas at Austin this year — calls his
own.

In style and genre, the tunes range from (and sometimes blend) folk, jazz, blues, pop-rock and country, with Greenberg's versatile voice and estimable guitar prowess anchoring it all. (One listen through the barrage of cover songs on the dude's Soundcloud should demonstrate the crazy breadth of his tastes and palette.)

In turns soulful, twangy, jangly and aching, Greenberg sounds on Dream Sequence like Sturgill Simpson meets Dave Matthews meets simmering Texas midnight music. The album is slinky, sexy and smooth, alternately lit in washes of sun and moon. It's a highly-replayable folk/country album that is as much for cool mountain mornings as it is for smoky old palaces of frustration and longing.

I, for one, am tempted to think of the whole thing as the latest entry in the growing list of impressive, new alt-country music coming out of San Antone. Greenberg, who was kind enough to speak with the Current a few weeks back, isn’t entirely sold on the country label, though.

"I've always been sort of averse to using that genre label," he said. "A lot of people I know and love and respect just cringe by hearing that word."

Greenberg pointed out that Townes Van Zandt, Willie Nelson, Sturgill Simpson and other country greats, new and old, are important inspirations for him, but he laments that so much contemporary country is "just so fake and actively detrimental to the reputation of country music and Texas as a whole."

"The ultimate place I’d like to be in the country scene of San Antonio, or Texas overall, is not necessarily the most traditional or genre-specific,” Greenberg said, “but somewhere that embodies that warm, authentic and honest mentality of all of my favorites."

And Dream Sequence is evidence he's doing just fine in that regard.

As the title not-so-subtly indicates, the inspiration for much of the album came from Greenberg’s dreams.

"There were a lot of times over the past year or so that I’d wake up from dreams with melody ideas, or some vivid imagery that I really wanted to capture in a song. On the other hand, some of the subject matter discusses dreams in a different sense — in the ‘goal’ sense of the word."

Assuming that one of those goals is proving his chops as a songwriter and recording artist with a real vision, I'd say he's doing pretty damn well in that respect too.