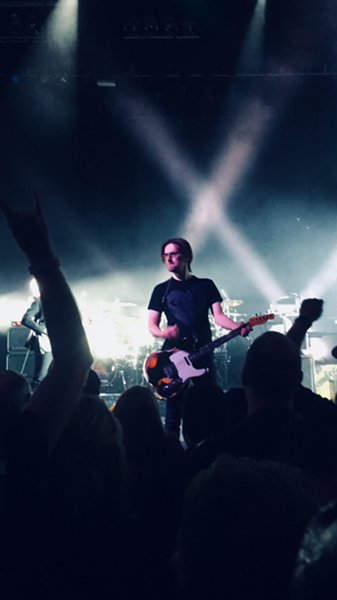 If you ever wanted to design a prog rock card game, you could do worse than Who In The World Is Steven Wilson?

Wilson, a self-described “51-year-old nerd,” commanded the audience’s attention for three hours at the Aztec Theatre on Friday night with a deft mix of genres, styles and decades, pulling from throughout his career. As the show came to an end, Wilson struck a Jesus Christ pose during one of his heaviest numbers, “Sleep Together.” Listeners would be forgiven for feeling like the ’90s never ended… until he threw a cover of Prince’s “Sign O’ The Times” into his encore.

Unlike many musicians of his genre, Wilson doesn’t rely on flashy or show off-y playing. Instead, he uses a deft sense of melody and expansive arrangements to create a majestic tapestry of sound. He effortlessly weaves sounds from the ’70s, ’80s and ’90s into tight rock arrangements that rely on steady drumming and strong keyboards in addition to his guitar.

On Friday, the visuals didn’t hurt either, as a varied light show and video screen gave the production a strong visual component. At times, the videos turned simultaneously simplistic and overwrought. A lifejacket and single shoe washing up on a deserted beach? Yes, we get it, Steven.

But Wilson successfully contrasted this with a self-deprecating sense of humor during his between-song banter.

“I understand you come to my shows to get depressed,” he said, citing The Cure and Joy Division as early influences. “But I’m not that kind of guy. I just put it into my music and offload it onto you.”

Indeed, you would be hard-pressed to know from the crowd that Wilson, who looked like a guy doing Stephen Malkmus cosplay, was influenced by mopey goth icons. When his music got heavy, such as on the pre-intermission closing tune “Ancestral,” he had middle-aged Michelob-pounding bros throwing devil horns. Take that, Robert Smith.

Wilson’s first set pulled largely from his solo career, opening with a double shot of “Nowhere Now” and “Pariah” from his most recent album, To the Bone. He did include one song from his old and still-beloved band, Porcupine Tree. “The Creator Has a Mastertape” got a big response from the attendees.

But the crowd, which skewed to middle-aged men, clearly knew his solo material as well.

Wilson noted that he was having trouble with his voice, and the crowd helped him out on material from all of his eras. He joked that he sounded like Tom Waits, but it didn’t show. He had to step back from the mic a few times and occasionally looked perturbed, but he still sounded spot-on, even on high falsetto vocals.

The band was clearly road-tested. Wilson noted that this was their 115th show of the year, and the tightness was unmistakable.

They returned to the stage after a 20-minute break, kicking off the second set with “Arriving Somewhere But Not Here.” Arguably Wilson’s masterwork, the Porcupine Tree classic highlights Wilson’s many strengths. Classic prog can be simultaneously meandering and absorbing, pulling the listener into epics that feel long and provide Frodo-esque mini-excursions. But “Arriving” is the opposite. Despite its 16-minute length, the song feels snappy and concise, a masterpiece of arranging. Its chorus may unwittingly serve as a mantra for Wilson’s music: “All my designs/ Simplified.”

Wilson followed this with the most challenging song of the evening, “Permanating.” He jokingly called it “disco,” and said that his metal fans didn’t like it. While the San Antonio crowd ate it up, the song is surely a challenge to people who learned of him through his production work with Opeth.

That song in particular demonstrated Wilson’s willingness to challenge his fans, an important quality in someone of his ambition. At times, the sound of the band recalled Rush in the ’80s, an era that’s their most controversial. That Wilson continues challenge listeners, 30 years into his career, is his true strength. He could undoubtedly tour endlessly with Porcupine Tree, grinding out the classics, but he’s walked away to follow his muse.

By the time the band tore through “Detonation,” they were willing to cut loose, and they finished the song with a limber funk jam, perhaps inspired by another of Wilson’s heroes, Prince, who he described as his favorite artist of all time.
The encore was straightforward. He returned to the stage with a 5-watt amp for Porcupine Tree’s “Even Less,” playing the song unaccompanied.

He followed that with the Prince cover and Porcupine Tree’s “The Sound of Muzak,” before closing with one of his most melancholy numbers, “The Raven Who Refused To Sing.” It was a bold choice for the finale, but it worked — and powerfully.

Wilson’s deck is stacked, and he knows what cards to play in a way only a long-time pro can. May he continue to play winning hands for years to come.