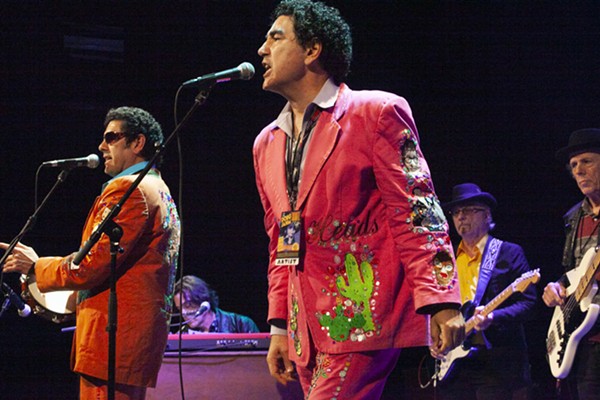 It’s been a rough couple of years for Hector Saldaña, founding member of the San Antonio power-pop band the Krayolas.

He lost his father in 2017 from a progressive disease, then last year had a traumatic amount of musical gear stolen, including a Harmony guitar he played at his dad’s funeral. Police caught the thief, but he didn't give up where he stashed all of Saldaña's axes.

But instead of wallowing in the darkest depths of his soul for too long, Saldaña channeled that darkness into creativity and will later this month release the first collection of Krayolas music in five years.

The six-song EP Saldaña Bros. varies in tone and genre from track to track, yet it retains enough of the Krayolas' classic '60s pop vibe to make it sound as cohesive as a full LP.


"Part of you is thinking, 'Does anybody listen? Does anybody care anymore?'" said Saldaña, Texas music curator for Texas State's Wittliff Collections and a one-time Express-News music writer. "It was a time for a reassessment, and I started thinking, 'How did [The Krayolas] begin?'"

Saldaña explained that he wanted to reexamine the Krayolas’ roots after finishing the cathartic and folksy tune "The Murder at the Taco Land" last year — one of the songs on the new EP.

The other five tracks, excluding “Taco Land,” had already been written, but the playful energy around the remaining four really lend to the coherence of the collected songs.

The bouncing "Baby I was Wrong" is a song Saldaña claims he may have written about fighting with his brother — Krayolas drummer/vocalist David Saldaña — over songwriting and musical direction. The organ-forward “Psychofant,” the Honky Tonk-esque “Sometimes the Bridesmaid, Sometimes the Bride” and the puro San Anto, Spanish-language accordion jam “El Cucuy” all help make Saldaña Bros. a well-rounded experience that both longtime and recent Krayolas fans can dig.

In case you aren't familiar with the Krayolas, who released classics like "Catherine," "Little Fox" and "Fruteria" and were most active in the late '70s and early '80s, here's a quick history lesson:

In 1975, Saldaña and his drummer brother jammed in a bedroom, entertaining their friends with what would be the first manifestation of the the band. Within a few years, the brothers, along with guitarist Van Baines and bassist Barry Smith, would take San Antonio and the region by storm with their blend of garage rock and pop, drawing comparisons to the Beatles, the Who and other heavy hitters from the ’60s and ’70s.


After taking an almost 22-year break, the Krayolas returned in 2007, releasing new and old music with special guest appearances from Texas legends like Augie Meyers and the Westside Horns. The band continued to push the boundaries of its sound, introducing elements of Chicano soul and Conjunto into the mix, all while securing acclaim from NBC News, Texas Monthly, Pollstar, BMI Music World, Action Magazine, No Depression, Village Voice and obviously the Current.

The band then returned in 2015 with an explosive performance at the Paramount Theatre in Austin for a special SXSW show honoring legendary San Antonio musician Doug Sahm.

"In essence, The Krayolas are me and my brother fighting — that's the truth; arguing and fighting to the point that we scare all the people around us and make people uncomfortable," said Saldaña, laughing.

"We both love each other, we get along. He has a very strong personality, so I guess that's a part of it. But I'm the first person to say, 'I want to write music that I can get into and crank loud and rock out to,' and so I hope that someone would like to do that with [this EP]."

While there won't be an EP release party or show for this collection, Saldaña promised we won't have to wait long for the followup EP, Saldaña Bros. Vol. 2, due this spring.


Watch the lyric video for "The Murder at the Taco Land" below:


Check out the EP on Spotify, iTunes and most steaming platforms everywhere on Saturday, January 26. For more information visit thekrayolas.com