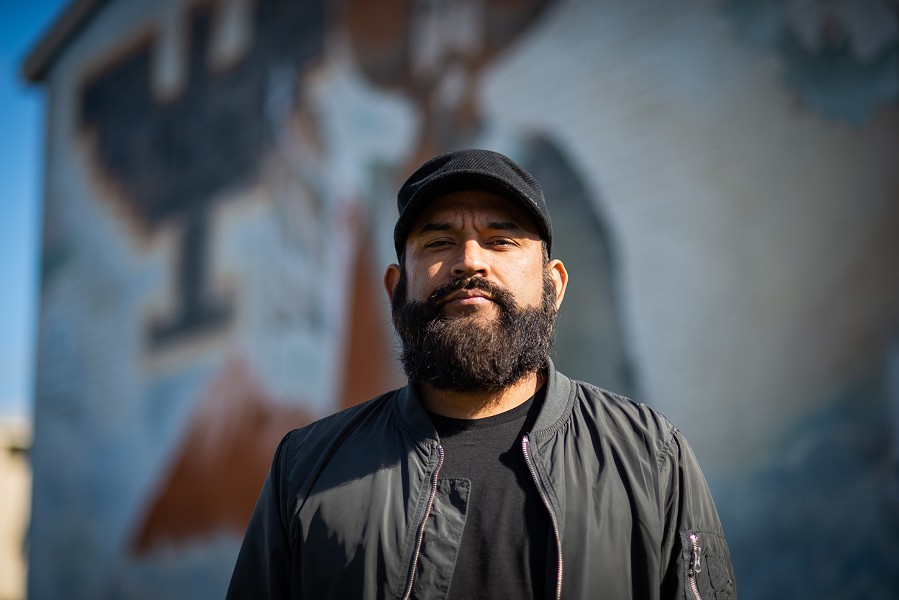 When rapper Mexican Stepgrandfather (Mexstep), also known as Marco Cervantes, told us he was releasing his first solo album in 9 years, we were more than a little stoked to get the news.

The director of Mexican-American studies at UTSA and one third of the hip-hop group Third Root has been actively crushing mics and rocking stages in the region for over a decade, securing his spot as one of the cities dopest rappers.

But it’s not just the amount of skill behind the pen and the mic that makes Cervantes one of the illest hip-hop artists in town. His lyrical content reflects the heart of a freedom fighter: a man eager to educate the community about the injustices done to those in marginalized demographics, especially in San Antonio, and to ignite a change in the community, starting with a shift in thinking.

On his new release, titled Resistir, Cervantes pulls no punches while going after Trump supporters, colonialism and the prison-industrial complex, all while urging listeners to resist the doctrine of fascism and any other ideologies that keep peripheral communities enslaved to government systems aiming to wipe them out.

Brownout and Black Pumas producer Adrian Quesada added a dose of flavor to Cervantes' original production of the record. And with help from Quesada and musicians from local bands like Bombasta, the music itself is a celebration of Cumbia, Son Jarocho, Tejano and funk, all while still sounding very hip-hop and very San Antonio.

On songs like “Dios Mio” and “Tejano Summer,” Cervantes raps about how celebrating with regional Mexican genres Tejano and Norteño, as well as Cumbia, can help Latin folk remember their roots and preserve their culture. Also, on “Mal de Ojo,” Mexstep highlights his own experience with Santeria as a means of decolonizing himself. He also encourages the Latin community not to forget the past or the customs of their ancestors.

“Here in Texas, there is a history of the attempted wipeout of indigeneity of Native people,” Cervantes told the Current. “And through that process, there’s been politics of domination, and a way to get out of that is to challenge that colonial thought."

“I feel music can do that. I [also] feel like there’s other ways — other artistic mediums [that can challenge colonial thought]. But as far as colonized people, I’m talking indigenous native history here, and all the racism that comes out of colonial thought – history of slavery, history of occupation, history of subordination — a way to resist this and to challenge this is through music, artistic expression.”

Resistir feels like a collection of modern-day Negro Spirituals — songs that took the shape of Latin hip-hop bangers soaked with knowledge on how to resist oppression and journey towards freedom.

“With my love for music and my love for language, one of the ways that I can contribute to fighting injustice is through music and that’s what I really wanted to address in the album,” Cervantes said.

Resistir was released earlier in January and is available on Bandcamp and streaming sites like Spotify. Mexstep will celebrate the release of the album with a show on Saturday, February 2, at Hi-Tones with Bombasta, Foreign Arm and Apaso. $5, 9pm, Hi-Tones, 621 E. Dewey Pl.