Last Dance: The Soul Spot Ends Its Nine-Year Residency at Tucker's This Friday 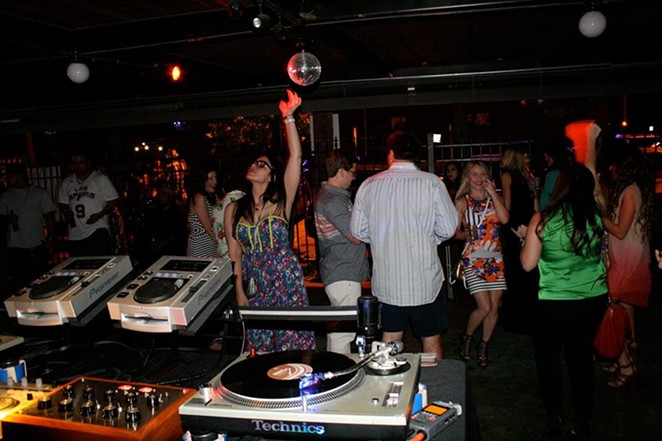 After nine years of dance floor magic, the Soul Spot will light up its disco ball for the last time at Tucker's Kozy Korner.

Co-founded by JJ Lopez and DJ Scuba Steve in 2010, the Soul Spot was a bi-weekly party held every other Friday at Tucker’s, located on the edge of East Houston and Cherry streets. Scuba Steve has since departed, but Lopez, along with Leonard Trujillo, Matt Vasquez and Ben Luhrmann, helped build a community centered around soul, freestyle, R&B and funk. The soundtrack drew a vast demographic of San Antonio dancers, party-goes and fans of vintage urban sounds.

But all things eventually end. Via a Facebook post, Lopez, who's also the General Manager at Trinity’s KRTU 91.7FM, announced the party was over — for now, anyway.
The Current hit up Lopez for more information on the seemingly sudden kibosh.

"Well, ya know, nine years is a long time. It’s the longest residency I’ve ever held," said Lopez, who got his start DJing at the Cameo Theatre in the late '90s. "There's been some challenges and we’ve weathered them — when we had great support from the venue. [Tucker’s] has gone through some management changes, and we’re just ready to kind of end it — close that chapter and let them take over their own programming.”

Lopez says he feels no no ill will towards the venue or vice versa. Soul Spot is grateful to have brought life to the legendary East Side club for as long as they did.

“The fact that we’ve brought in DJs from Philadelphia, New York and LA, it’s amazing,” said Lopez, reminiscing about how disc jockeys from across the nation would request bookings because of how lit the crowds were at Tucker's.

Even though the party is taking a disco nap, if you will, Lopez said he's optimistic about it finding another venue.

1338 E. Houston St.
San Antonio, TX
(210) 320-2192
Music Venue
Map
Get our top picks for the best events in San Antonio every Thursday morning. Sign up for our Events Newsletter.