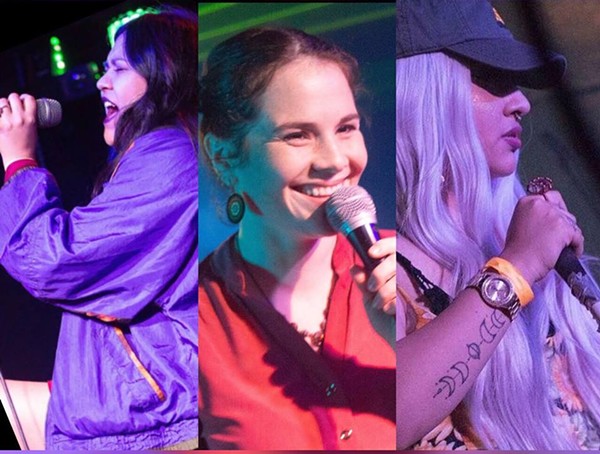 Last week, we hit up local honky-tonkster Garrett T. Capps for his opinion on which San Antonio artists we should be paying attention to. Now, we're touching base with local rapper Kree Villegas, better known as Kree23, who graced the of our 2017 San Antonio Music Showcase issue.

The tattooer and ferocious live performer has been making a buzz in the Alamo City for a few years now, making her the ideal person to give us some insight on which other local hip-hop and r&b performers are making serious waves.

There’s something old-school about San Antonio R&B singer Carolina Cantu, better known simply as Carolina. Though only 27, there’s a maturity to her style, and her raw talent demands attention.

“Carolina’s got pipes, [and] I love the different rhythms she has,” Villegas told the Current. “She has a lot of crazy styles, and I think that’s what I dig so much about her. She’s just so eclectic in the way she moves her voice. I fucking love that woman.”

Carolina's vocal timbre is similar to alt-r&b singer Willow's, but instead of singing over the experimental indie beats, Carolina flows gracefully over SZA-style psychedelic trap beats. Follow Carolina on Facebook at here. Check out her song “Limbo,” released this month, below.

Drawing influences from the likes of Missy Elliott, Eve and Erykah Badu, Daniza Yvette Torres — better known as Niza da Buddah — has a flow reminiscent of early ’90s rappers while still sounding 2019. By the way she raps and sings, you can tell she’s not trying to sound like anything other than herself, which might be the most enticing thing about this up-and-coming San Antonio artist.

“Niza’s style is very elegant,” said Villegas. “[She’s] just so fucking articulate and beautiful. [Her] sound’s so crispy and clean on the beat – real clean. Like, she has this cadence that’s tight. I fucking love it. She’s gonna do some shit. She talks about vibes and conscious rap.”

We first saw Lina Sea performing at Second Verse, a monthly spoken word poetry event, at the tail end of 2017. With precision and poise, Sea’s performance silenced the packed room and she kept us hanging onto her soothing voice and captivating story of self love and actualization.

Although primarily a poet, her spoken-word performances project the same kind of energy as a hip-hop artist.

"[Lina Sea] has this crazy voice — she sings too," Villegas said. "And I love what she talks about. It’s empowering, especially for women."

If you didn't know, San Antonio has an enormous poetry scene, and Sea is definitely one of our favorite poets to see live. Watch the  performance from Second Verse below: