Whether you’ve heard the name James Yancey or Jay Dee, the world of hip-hop knows him as the legendary J Dilla. And San Antonio welcomes his legacy once again.

Early in his career, James Dewitt Yancey, otherwise known as J Dilla, was a key element to the hip-hop powerhouses Slum Village and A Tribe Called Quest, getting his start in the late '80s DJing for local music and rap crews. Soon after, he raised his prominence after joining the renowned collective the Soulquarians, whose members included D’Angelo, James Poyser, Bilal, Questluv, Q-Tip, Common and Erykah Badu.

During his time working with the collective, the Detroit native was behind the production of a multitude of hip-hop’s most celebrated works. Yancey passed away due to complications with Lupus in 2006 at age 32.

Preparations for the fourth annual Dilla Day SA are underway. Hosted by San Antonio disc jockey Gabe “DJ Freeverse” Mendez, the event will commemorate the life and work of the late J Dilla. 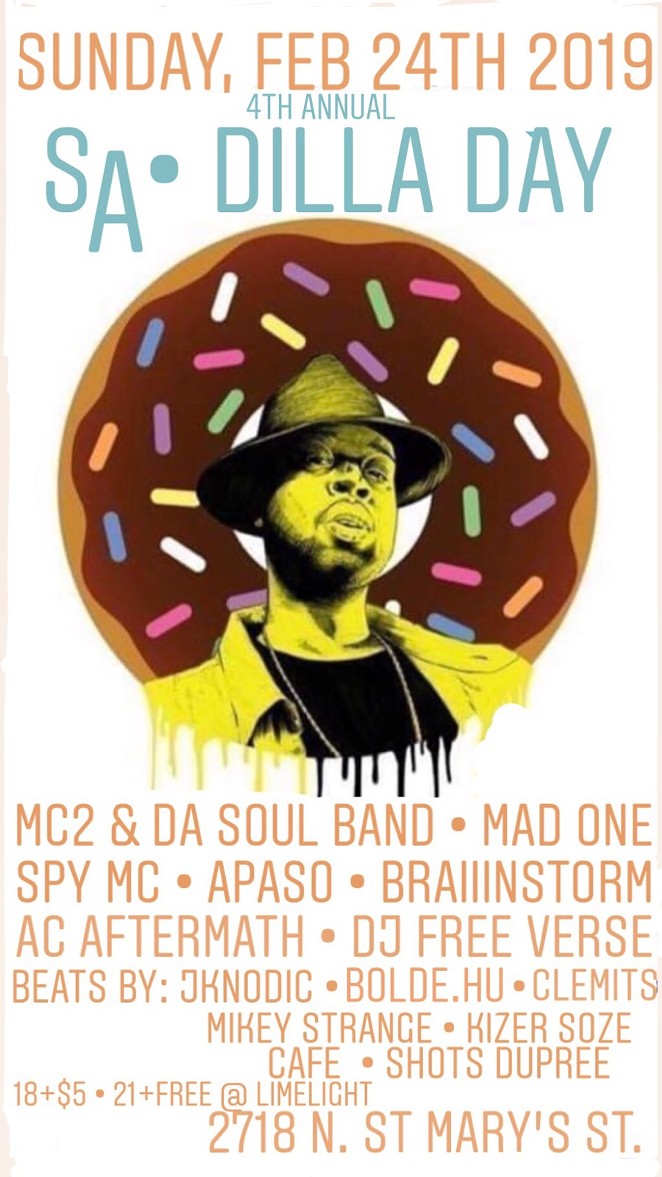 “I’m excited for this year’s event,” said Mendez. “It gets bigger every year and most people are ecstatic to find out that Dilla was behind the production of some of their favorite music and artists.”

Mendez, 31, has been spinning records in San Antonio for 10 years.

“The city's music scene needs events like this,” he said. “I met Ma Dukes, Dilla’s mom, at SXSW in 2015. I spoke with her about her son’s impact on the music I loved and how I wanted to introduce more people in San Antonio to his work.”

The James Dewitt Yancey Foundation, which has a Texas chapter, helps to raise awareness about Lupus by using hip-hop and arts as a creative channel.

“We’re expecting between 100 and 150 people to show up this year,” said Mendez. “The first year was at Bottom Bracket, the second at
Limelight on St. Mary’s, the third year was at Burleson Yard beer Garden, and
this year we’ll be hosting again at Limelight.”

This year’s artist lineup will be broken into two categories and include native San Antonio emcees such as Spy MC, Apaso, Mad One, AC the Aftermath, MC² & The S.O.U.L. and Braiiinstorm.

“There will be more emphasis on the dope producers this year,” Mendez added.

Admission to the show is free, and complimentary donuts will be offered as a memento to one of Yancey’s most celebrated works, his third studio album, Donuts. The album was released on his 32nd birthday, February 7, 2006, three days before his untimely death.