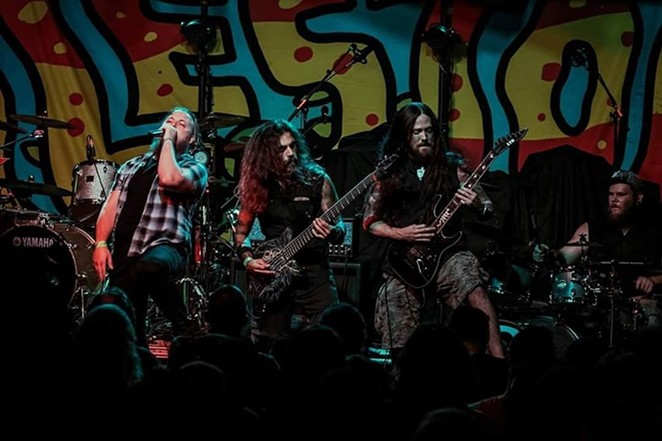 Continuing a series where we ask San Antonio musicians what three local artists they think are making a buzz, we hit up Covina frontman Eric Garcia to talk about acts on the heavier end of the spectrum.

We first spoke to Garcia in 2017. Then a sergeant in the National Guard, he was juggling Hurricane Harvey relief efforts with his musical life.

As a longtime scene participant — from playing a ton of regional shows to performing at festivals like River City Rockfest — we thought Garcia would be perfect to shed light on who's bringing the mosh in San Antonio.

[Nahaya]’s sound is amazing,” said Garcia. “We’ve played several shows with them, and every time, I’m just blown away by how great their sound is. It’s only a matter of time before they’re picked up [by a record label]."

Garcia isn’t wrong. Barely a minute into “Spark,” the opening track from Nahaya's 2019 EP Transcendence, you can tell the metalcore five-piece mean business. Blending elements of hardcore punk, American thrash and European melodic death metal, Nahaya’s sound is a barrage of sonic ferocity. While we couldn’t find any upcoming shows listed, the band has already played a couple this year, so there's likely to another coming soon. Follow them at facebook.com/nahayaofficial/.

Listen to "Spark" below:

Ammo for my Arsenal

“Ammo for my Arsenal — those guys are dope and have been around for a minute as well,” Garcia said. “They’re heavy metalcore and the new music they’re coming out with is pretty sick.”

“Slave I,” the new track from Ammo for my Arsenal, might be one of the best metal songs to come out of San Antonio in years. This isn’t a knock at other metal bands here, rather a testament to the high-caliber musicianship and clever songwriting ability of this group.

The track sounds like it's folding over itself, like bodies being dragged over bodies in an everlasting spiral of carcasses. That’s the imagery we get anyway. Check out their music at ammoformyaresnal.bandcamp.com, and watch them with Lonestar Massacre at Bonds Rock Bar on Friday, February 15.
$5, 8pm, Bonds Rock Bar, 450 Soledad St.

Listen to "Slave I," below:

“I’ve heard a lot of great things from [Bluntsplitter], and I hear that they put on a really great show,” Garcia said of the up-and-coming hardcore/thrash outfit.

Even though the recordings we heard from Bluntsplitter’s bandcamp were poorly mixed, you can still hear the angsty potential and energy in their material. Plus, their sound's in tune with the current trend of throwback hardcore and roots-metalcore — sort of like what Code Orange and Vein are doing right now. Bluntsplitter played earlier this month, but they'll likely have more shows booked soon. Follow them at facebook.com/pg/Bluntsplitter420/ for more information.

Check out a video from one of Bluntsplitter's live shows last year: