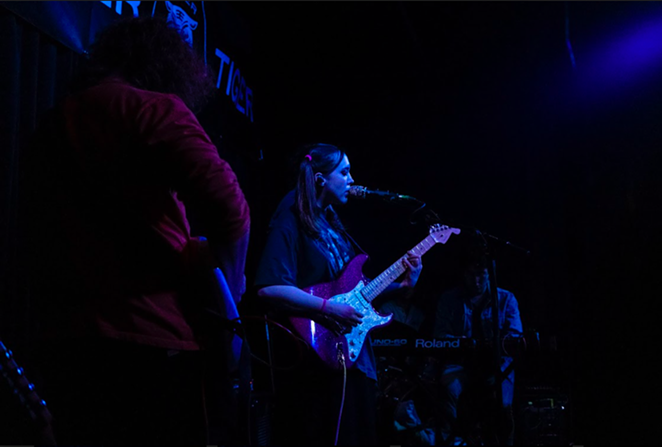 The next words from Sophie Allison, the Nashville musician best known by the stage name Soccer Mommy, fulfilled the promise as everyone at the Paper Tiger last night mouthed in unison: “I don't wanna be your fucking dog / That you drag around.”

Even though Allison's just 21, Soccer Mommy’s debut full-length album Clean topped a New York Times pop critic’s Best of 2018 list, and she’s spent much of the past year being profiled by Rolling Stone, the Fader and even Forbes.

But before she embarks to play some West coast shows with Vampire Weekend this fall — a worthy followup to her previous stints touring with such contemporary indie-rock titans as Mitski, Kacey Musgraves and Slowdive — she graced the Alamo City with her first show since a performance at 502 Bar last April.

Motiongazer, the solo project of Soccer Mommy guitarist and fellow Nashvillain Julian Powell, opened the evening with a short set that oscillated between atmospheric, ethereal post-rock and jaunty folk-rock reminiscent of the War on Drugs. Downtempo and meditative, Powell’s opener evoked a stand-out mood: dreamy guitar tones over synths that lapped like waves against the shore.

Hovvdy, an alternative rock band hailing from Austin, took the stage next. Founding bandmates Will Taylor and Charlie Martin sang in low, melancholic tones, as if to lull you in with almost angsty, emo lullabies. Later in their set, they shared new material much sunnier than their earlier, introspective work — but it wasn’t long before we were back to music that well matched the past week’s gray skies and isolating weather.

Perhaps the best way to describe Soccer Mommy’s sound is “approachably vulnerable.” Behind her glittery mic and sparkling pink Stratocaster, Allison assumed a blank expression as she crooned about desire (“Try”), love lost (“Still Clean”) and jealousy (“Last Girl”) — no matter how upbeat the melody.

The crowd loved her.

The five-piece band dipped offstage so Allison could perform the most mournful cover of Bruce Springsteen’s “I’m On Fire” there ever was. Music is rarely so effectively sad, but her treatment of this Born in the U.S.A. single peeled it back and exposed it for the dour tale masked by the ’80s sensibilities of the Boss’ original recording.

The rest of the group returned with good news: Kacey Musgraves had just won Best Album at the Grammys for last year’s Golden Hour — to everyone’s applause and Allison’s delight. I’m not saying the morale boost was exactly why the following performance of “Scorpio Rising” was so good. I’m just saying the choruses built to the most satisfying, cathartic crescendos of the night.

“I don’t like making you wait very long,” Allison joked from the stage before closing out the set.

Let’s hope her next visit to San Antonio isn’t too far out, either.