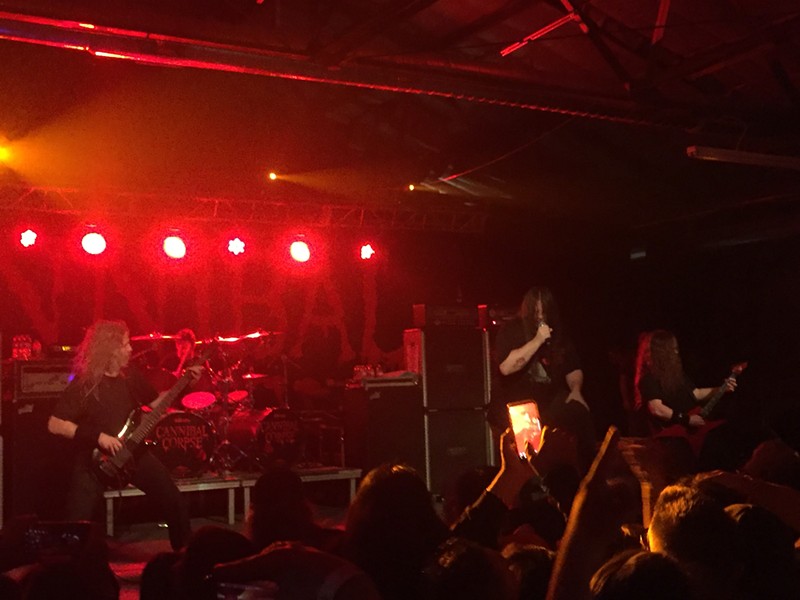 Attendees at last night’s Decibel Magazine Tour 2019 kickoff date at the Vibes Event Center can be forgiven if they were shocked to see other fans holding up their cell phones.

All four bands on the package tour laid down an old-school death metal beatdown that transported the crowd back to the early '90s, when the genre was birthed. And, yes, kids, that was a time when cellphones weren’t ubiquitous at shows.

When the Decibel bill was announced late last year no one doubted that co-headliners Cannibal Corpse and Morbid Angel would deliver the goods. But shortly after the announcement, Cannibal Corpse guitarist Pat O’Brien was arrested for burglary and striking a police officer while his home was in flames.

That made last night's show the debut of his replacement, Hate Eternal’s Erik Rutan, who has produced a number of Cannibal Corpse albums and is a former member of Morbid Angel. Could the band keep their legendarily tight show intact with a fill-in initiate?

The crowd would have to wait to find out.

First up was Blood Incantation, hailing from Denver. The band's labyrinthine sound contained nods to Morbid Angel, making a good intro for the evening. Despite the dense arrangements, the outfit gifted listeners with memorable riffs to hang onto. In addition, it previewed a new song from its forthcoming followup to 2016’s acclaimed Starspawn.

Necrot, a power trio from Oakland, Calif., followed with a set that stirred thrash metal elements into the death metal cauldron. Its sound provided a reminder that '80s legends like Kreator, Sodom and Slayer paved the way for the death metal underground to explode via tape trading. Bassist-vocalist Luca Indrio charmed the crowd with his heartfelt shoutouts about the way an evening of live music can save your life.

Morbid Angel brought the opening punch of the duel-headlined bill. Despite enduring a wearying series of lineup changes — guitarist Trey Azagthoth is the only member from the classic lineup — the band still brings it live. The members' status as scene vets was apparent from the get-go, as they didn’t have to sell their material. Instead, they simply conjured it up and let the audience gaze at its monolithic construction.

The band’s riffs and time changes are jagged yet so well designed that the transitions weren’t jarring. Its music relied on a mix of alternate time signatures and polyrhythms but somehow did so with a sense of grace reminiscent of ancient architecture: imbued with meaning yet practical in its construction.

Morbid Angel's set included songs from throughout its large catalog, with “Blood On My Hands” and “God Of Emptiness” from Covenant firing up the mosh pit.

But, inevitably, the evening belonged to Cannibal Corpse. The death metal legends remain a live powerhouse, not missing a step as newcomer Rutan made his debut.

The band delivered the same set it's played since the release of 2017’s Rutan-produced Red Before Black, starting with that album’s standout, “Code Of The Slashers.” The song made a perfect opener, starting at idling speed before hitting the gas into teeth-gnashing oblivion.

Vocalist Nathan Explosion — er, George “Corpsegrinder” Fisher — conjured up his signature hellish howl. He swung his mane in a neck-breaking display of headbanging when he wasn’t singing and stalked the stage like Leatherface when he was. The whole band took a similar no-nonsense metal approach, blowing through song after song, assembly-line style. Drummer Paul Mazurkiewicz signaled each new tune with four quick snare hits reminiscent of Marky Ramone’s legendary count-offs, and the band ran through 18 songs in 80 quick minutes. All the while, bassist and songwriter Alex Webster's nimble playing showed why he’s regarded as the Steve Harris of extreme metal.

Morbid Angel’s Steve Tucker summed up the evening with a parting message of as his band left the stage: “Until next time, hail fucking Satan.”