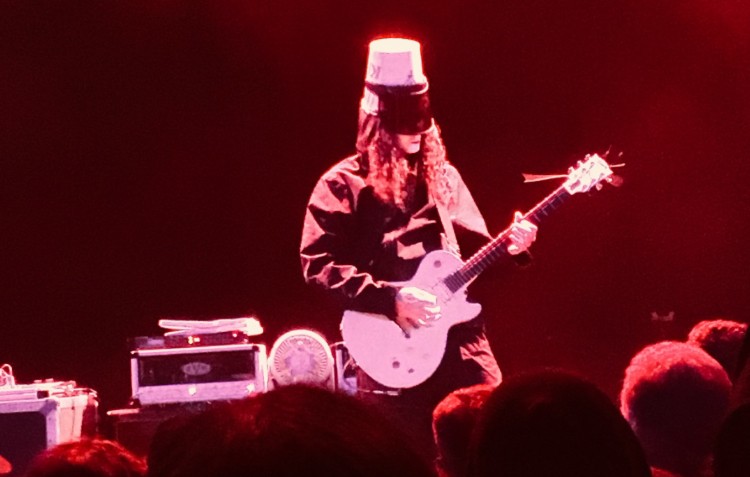 Taking the stage sporting his trademark Michael Myers mask and, well, a KFC bucket on his head, guitar virtuoso Buckethead brought his cartoonish schtick to the Aztec Theatre Wednesday night, treating the crowd to a two-hour display of instrumental virtuosity free of dull rock clichés.

Born Brian Carroll, the 49-year-old Buckethead stands 6’6” (over 7’ with bucket) and hasn't been photographed in years without his trademark costume. Having released more than 300 solo albums (118 in 2015 alone; he was busy that year), Buckethead relies only on composition and chops in his shows, eschewing a stylish multi-media presentation to invoke the vibe of a creepy guy in a basement with his amps and drum machines, obsessively playing alone.

In the late '90s, Buckethead seemed like an eclectic born too late or stuck outside of the normal space time continuum — a shredtastic John Titor. Then the man with the KFC bucket joined Guns 'N' Roses (in the Slash archetype spot, natch) and the time streams seemed to have corrected. This, then, was where he belonged. But he exited GNR, cementing his status as a weird dude who maybe wasn’t born too late but was simply an enigma for the post-guitar era world of streaming tunes. Given the anonymity of his live performances, perhaps Buckethead has more in common with Deadmau5 than Joe Satriani. In the end, everyone was cool with saying “what a weirdo” and being dazzled.

Buckethead ambled onto the Aztec stage at the old people-friendly start time of 8:15. The crowd skewed male, unsurprisingly, as Buckethead’s key demographic likely includes a lot of Guitar for the Practicing Musician subscribers. And for fans who enjoy six-string fireworks, there was ample technique on display. His mask gave him the demeanor of a slightly less animated Mick Mars, and his no-frills demeanor gave the performance a clinical feel. But there was a still a lot to observe.

Buckethead announced in 2017 that he has a potentially fatal heart condition, but that doesn’t seem to have affected his determination to carry on. Though he has been in bands with everyone from Les Claypool to Bootsy Collins to Bill Laswell, the guitarist generally goes it alone on solo performances, relying on loops and drum machine accompaniment, as well as some pre-recorded parts as he pulls from his big ol’ bag of guitar tricks.

The pacing for the show was professional, as Buckethead frequently alternated punchy numbers that displayed a funky hard rock vibe, somewhere between Steve Vai’s “Attitude Song” and a 21st-century Jan Hammer. These were offset by songs that featured extended guitar solos that deftly balanced between lots of notes and more soulful passages. This sense of lyricism sets Buckethead apart from most other “shredders,” as the guy clearly has more musical ambitions than just showing off.

Although there's a showoff vibe too. Instrumentalists are often tagged with the “wankery” put-down, and it’s not hard to agree that it sometimes fits. After all, Buckethead did appear by himself onstage for two hours without speaking one word. But did anyone really miss, “How ya doing, San Antonio? Who here wants to rock?”

By the time the musician retreated offstage with a playful wave, the audience had been treated not just to punchy rock tunes and extended throwdowns, but also chicken pickin’, Tom Morello-style DJ scratches, guitar squeals processed to sound like lasers that he let the audience tap out on his instrument, Les Claypool-esque slap bass lines played on guitar with a pitch shifter, robot dance moves accompanied by hammer-ons, a nunchuck routine accompanied by pre-recorded dub step, a toy giveaway where Buckethead stalked the edge of the stage with a red-striped garbage bag of goodies, a talking severed head toy that was piped through the PA and, just for giggles, a few bars of the “Star Wars Theme” and snippets of “When You Wish Upon A Star,” both unaccompanied.

Buckethead delivered a memorable show that mixed a sinister ambience with humor while making a genuine musical connection via his heavy riffs and blinding leads. What a weirdo.