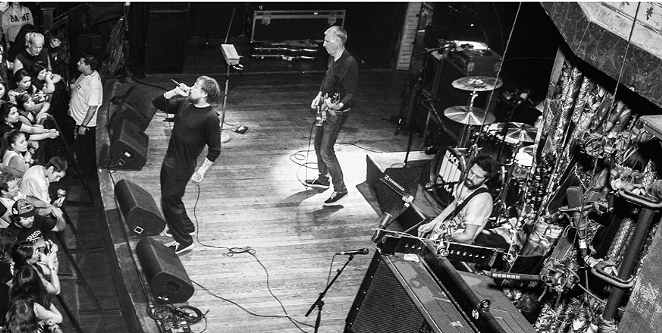 Seminal punk rock outfit Black Flag has just announced a return to San Antonio as part of a lengthy tour that extends throughout North America and into Europe and Japan.

Led by Greg Ginn — the only original member left in the band and the guy who owns rights to its name — Black Flag helped pioneer Southern California hardcore punk with a blend of knotty, distorted riffs and anti-authoritarian lyrics.

It's unclear whether there's been any resolution to ongoing conflicts between Ginn and numerous other musicians who passed through Black Flag — an upcoming performance by FLAG, a unit comprised of former members, suggests not. But from what we know about rock 'n' roll and egos, someone somewhere is still feeling salty.

Current singer Mike Vallely doesn't appear to be among the salty ones, though. He posted about the tour Tuesday, expressing an excitement to get back on the road after five years.

“We had a good run in 2014, playing some 60 shows in the US and Canada," he tweeted. "This year we have decided to get back on the road and to even more places, as we have already announced many dates in the US, UK, Japan and France with many more show announcements coming soon. I’m excited about getting back inside the songs, and I feel like I’m in the best place in my life to do so.”

This incarnation of Ginn's outfit will fly at the Paper Tiger on Friday, September 13. Tickets are $21 but not yet available for purchase. Check Paper Tiger’s website at papertigersatx.com for updates.