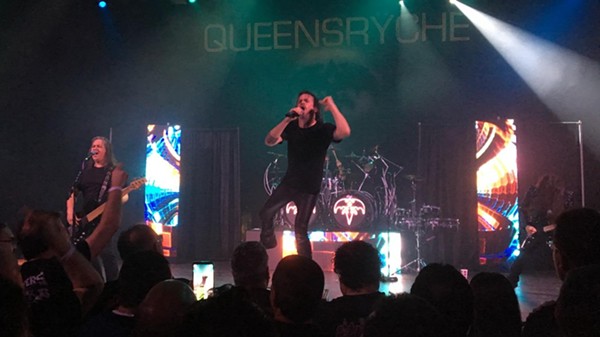 “I’ve seen Queensryche,” said one attendee of the band's Friday night show at the Aztec Theatre. “But this is the first time I’ve seen the cover band.”

And that's the obstacle the touring reboot of the '80s progressive metal act had to overcome. Even so, Queensryche and tourmates Fates Warning drew a house full of classic metal fans to the Aztec.

Perhaps the Alamo City's continued interest shouldn't be surprising. Queensryche rose to prominence in the mid-'80s and, indeed, played the Convention Center Arena some 30 years ago, opening for Metallica on the ...And Justice For All tour. But that was 30 years ago. And it hasn’t always been an easy, well, three decades. What's more, the band playing the Aztec on Friday only featured two guys from the classic Queensryche. If an outfit's slogan reads “Now featuring 40 percent original members!” it may have challenges ahead. Of course, some might reply that most bands of that era have endured lineup changes. Obviously true. But, in this case, former singer Geoff Tate and guitarist Chris DeGarmo appeared to drive the band creatively. DeGarmo is long gone, and Tate was fired in a TMZ-worthy breakup in 2012.

And this version of Queensryche even played two gigs as tribute act Rising West with test singer Todd LaTorre prior to Tate’s dismissal. So, for all intents and purposes, this is guys holding it down with material they didn’t write.

In other words, a “cover band."

It's also a band embracing its roots rather than the Broadway-goes-metal elements Tate pushed in his final years.

One sign of this change: when Queensryche played Operation: Mindcrime II live in 2006, the between-set tunes were electronica, faceless and modern. On Friday night, attendees milled around as the sounds of Billy Idol’s “Rebel Yell” and Ratt’s “Round And Round” pumped over the sound system.

But the real test of this revamped Queensryche's approach would be its performance.

Fates Warning, almost at co-headliner status, hit the stage for an hour, following a set from local rock outfit Gandhi’s Gun. Fates Warning mines much of the same territory as Queensryche, most notably in the operatic vocal stylings of frontman Ray Alder, a San Antonio native. Drummer Bobby Jarzombek, also a 210er, he held down the low end, along with bassist Joey Vera. Each supplied a heavy groove along with complex fills. Vera was particularly animated, pulling visually from Flea’s big bag of tricks.

Anyone expecting a nostalgia fest from Queensryche might have been disappointed as the band roared out of the gate with “Blood of the Levant” from its new album The Verdict. The stage featured a multi-media vibe with images from the act’s lengthy history, but mostly the focus was on the musicians themselves.

The band followed up with some catalog numbers from the Tate era, the Promised Land chestnut “I Am I” and the robotic nightmare “NM156” from The Warning. Then, it took attendees back into the new material with back-to-back LaTorre-era numbers, including the knotty “Condition Human.” LaTorre prowled the stage with classic frontman moves and poses that would have rocked Sneakers to the core back in the day.

The setlist continued in this general pattern, alternating between more recent material and classics from the band’s heyday. A powerful “Queen Of The Reich” and “Silent Lucidity,” delivered mid-set, highlighted Queensryche's two most successful modes.

The crowd was fully onboard by the time the regular set closed with “Take Hold Of The Flame” and “Eyes Of A Stranger.” LaTorre is also a drummer, and he jumped onto a mini-kit to add accents to the outro of “Eyes” as well as a set-closing run-thru of the Operation: Mindcrime instrumental “Anarchy-X.” His percussion evoked the sound of marching, perhaps appropriate for the dystopian reality in which we currently live — and the one foreshadowed on the album.

You’ve got to hand it to Queensryche. There aren’t that many bands 30+ years into their career that would play almost half a concert of recent material. And when a majority of the band is new, that's an even ballsier move. Good for them. You’ll never create any new classics if you don’t believe in your material. Queensryche is probably not coming back to prominence, but they are definitely walking the walk. And, as we get farther from their glory days, that may be all that matters.