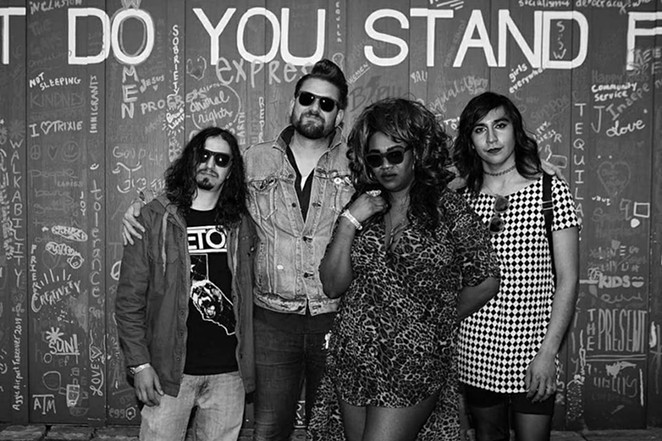 Self-described as a de-colonial, feminist punk collective aimed at creating a network of safe radical music spaces in San Antonio, Xingonas in the Pit are throwing the city’s first black punk festival — Afropunk in the Pit.

The Saturday, March 30, festival will feature the punk stylings of BLXPTN, Pleasure Venom, OJOS, Mercutio + The Constantines and After Dinosaurs. And as a bonus, it will feature a screening of the documentary Afro-Punk, which explores the roles and contributions of African-Americans in America's predominantly white punk scene. A talk with director James Spooner will follow.

“Growing up as a brown punk was really challenging for me,” said Daisy Salinas, who cofounded Xingonas in the Pit alongside Jazzmin Readeaux and Crystal (who chose not to give her last name). After sharing the same hardships of sexism and racism, the three wanted to bring change to a music community that they were still in love with.

A DIY POC punk movement is spreading across the United States, Salinas said. But, after feeling that it hadn't made inroads in Texas, the three decided to start Xingonas in the Pit. Ultimately, their goal is to strengthen marginalized queer, femme, brown and black communities involved in Texas' punk scene.

In October, Salinas and crew threw Black and Brown Punk Fest, which caught the attention of Afro-Punk director Spooner. He then contacted Xingonas in the Pit about doing a screening.

“So we decided to do Afropunk in the Pit,” said Salinas. “I especially feel that among brown and Latinx people there are certain issues — like anti-blackness — and that’s something we need to fight against. Nothing’s going to be solved if we don’t see ourselves as part of the problem.”

In an effort to create and maintain an inclusive and safe space for the event, attendees are encouraged to avoid racist, sexist, homophobic, transphobic, ableist, classist, sizeist, xenophobic and other oppressive language and behavior.