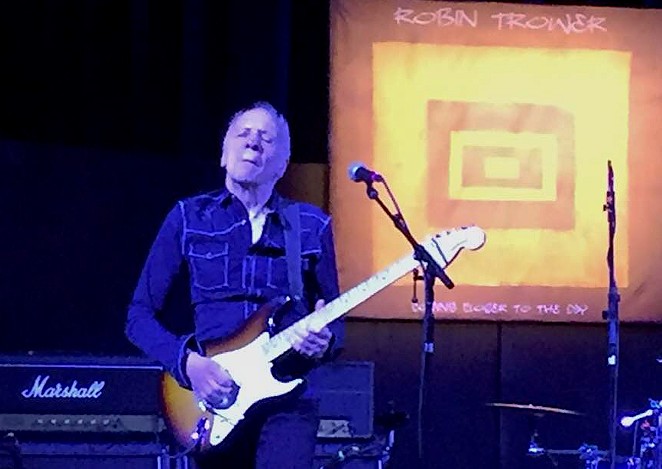 Since the blues is based around a scale of just five notes, it's a form that frequently veers into repetition and cliche in the hands of lesser musicians. Not so for British guitar icon Robin Trower, who played the Aztec Theatre on Sunday night.

The 74-year-old Trower has perfected a distinctive brand of shimmering psychedelic blues he's been exploring for nearly five decades, honing his approach much in the way masters of classical music hurl themselves into their craft. One gets the sense that while his '70s contemporaries were chasing groupies and chopping lines, Trower sequestered himself in his practice room, hunched over his instrument and a metronome.

During the course of Sunday's hour-and-a-half set, the guitarist repeatedly showed himself to be a master of tone and control, wringing more raw emotion from a single note than most wannabe-shredders can muster during the length of an entire solo.

The trio opened with "Too Rolling Stoned," a rocker from the 1974 masterpiece Bridge of Sighs. Bassist-singer Richard Watts and longtime drummer Chris Taggart laid down the tune's throbbing rhythmic core while Trower coaxed serpentine licks from his Stratocaster, head cocked back, face contorted like he'd swallowed something sour. His mouth moved with each individual note as if he sung along with his own improvisation.

Trower has cited Jimi Hendrix as a primary influence, and some of his compositions do sound like they could be lost outtakes from Axis: Bold as Love. But Trower clearly isn't living in the master's shadow. During "Lonesome Road," a slow burner from his recently released 23rd(!) solo album Coming Closer to the Day, the Brit's solo uncoiled slowly, growing darker and more menacing with each vibrato-drenched note. The effect was like a cobra rising to waver in front of its charmed prey.

Trower's two most recognizable numbers, "Day of the Eagle" and "Bridge of Sighs" came back-to-back in the middle of the set, bringing the crowd up from its seats. Whoops and applause punctuated the start of "Bridge's" marathon solo as Trower applied slashing bends and harmonic squeals to individual notes. The cheers gave way to silence, however, as the deftly unfolded instrumental passage pulled the crowd into a trance.

It's a testament to Trower's skills as a guitarist and performer that he could drop a pair of songs mid-set that other artists would reserve for their encores. No one walked out after "Bridge." The crowd stayed rapt for the remainder of the show.

Part of the praise belongs to Watts and Taggart, who provided workhorse support, charging ahead on the brisk rockers, settling into a languid groove for the funkier numbers or simply knowing when to hang back and let Trower's guitar dominate the proceedings.

The crowd, comprised largely of people in their 50s and 60s, cheered and stomped after the set's closer until Trower and his band reappeared for a pair of comparatively quick encores.

Given the interest a whole new generation of musicians is showing in all things psychedelic, it was surprising not to see more than a smattering of younger folks at the Aztec. Those who missed last night's show lost an opportunity to learn from a true master of the form.