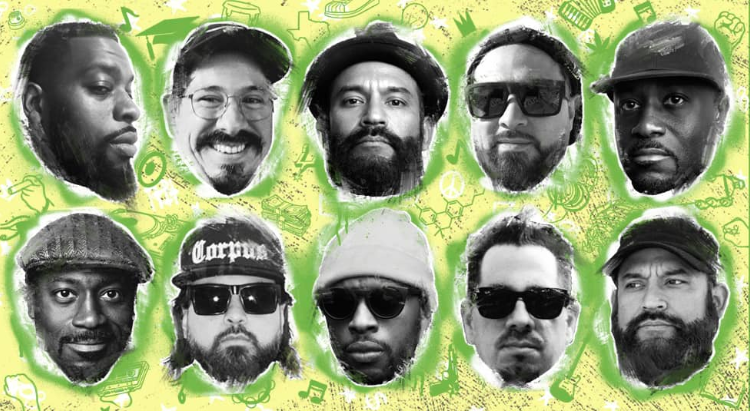 Kicking off last year with Summer Semester, the series explores themes of decolonization and raises awareness about injustices endured by people of color and native people. It also issues a call to action, urging listeners to become educated so they can fight oppression.

And, now, with the final installment, Spring Semester, which dropped May 3, the series has finally entered its home stretch.

Peters explained that the group wanted to create a unique musical experience and have it correspond with the semesters used in academic calendars.

“We were trying to give listeners a series of EPs that sounded like the four seasons,” Peters said. “From the warmth of summer through the cold of winter, back to the rain and growth of spring. The four EPs form a full yearlong curriculum that supports creating and keeping the agendas and methods of teachers trill (true and real).”

Peters also explained that music business evolutions such as streaming required the group to rethink its strategy for releases. The idea for its series was that by offering music in EP-sized bites, consumers can listen to 4 or 5 tracks more often, rather than trying to digest an entire album at once.

While the other three EPs certainly hold their own weight, there’s something especially fresh and heavy about Spring Semester that makes it stand out.

“Spring Semester features production from [DJ and nu cumbia pioneer] El Dusty, which gives it a different flavor,” said Cervantes, who added that the entire EP was recorded in El Dusty’s hometown of Corpus Christi “His style — along with Adrian Quesada’s shine throughout the EP — was amazing to work with, and I’m really proud of the end product.”

The EP opens with "Mexstep for President," a piece where Marco Cervantes shows off his chopping skills — a style of rapid-fire rapping made popular in the Midwest and on the West Coast.

The rest of the album is an eclectic mix of El Dusty’s cumbia influence with Quesada’s Latin rock flavor that easily could become the soundtrack for an afternoon drive around South Padre Island. With Cervantes' and Peters' expertly delivered verses atop the music, the mix feels vibrant and luminous yet retains an approachability that any fan of rap and hip-hop can digest.

The next chapter for Third Root will include releasing Trill Pedagogy on vinyl, touring, offering new merchandise and releasing more music, according to DJ Chicken George.

"While working on Trill Pedagogy, I was also compiling beats for the second installment the Mind Elevation Mixtape, which we first introduced in 2013," he said. "I'm constantly getting requests for the next volume, so now it's time to deliver."

Since two of the members are full-time educators — Peters teaches high school English on the west side of Atlanta, while Cervantes is director of Mexican-American studies at UTSA — the group must balance its rap career with teaching the next generation of Americans.

“I think racing the clock has been the biggest challenge,” Cervantes said. “I love teaching, researching and making music, so I feel there aren’t enough hours in the day to devote to all three, all the time. I try to do the best that I can, stay busy and let the ancestors drive me.”

For information on releases, tour dates and other general info about Third Root follow them on Facebook and check out their music at thirdroot.bandcamp.com.