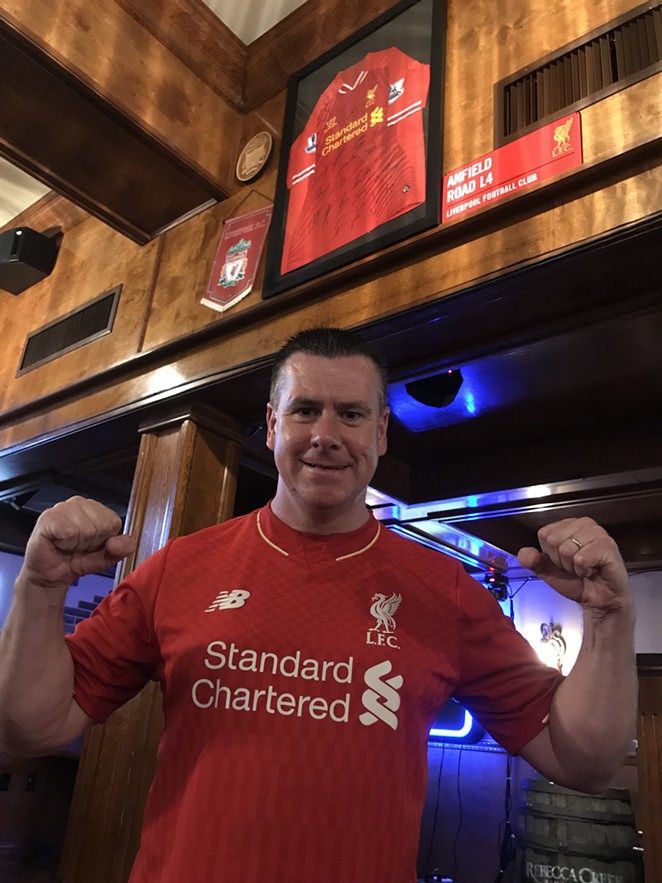 There is a Red Fever rapidly spreading throughout San Antonio. Consider yourself warned. It all started on August 10 of last year, when England’s five-time European champion Liverpool started its amazing run in the 2018-19 English Premier League season (they just lost the tournament against Manchester City by one point). It reached full-blown proportions on May 7, when the Reds absolutely demolished heavily favored Barcelona in the second leg of the Champions League semifinal, and it may explode on June 1, when Liverpool faces fellow PL rivals Tottenham Hotspur for the all-English final of the Champions League in Madrid.

"I think [Barcelona] got overconfident," Liverpudlian Joe Walmsley, a singer-songwriter who has been performing at Waxy O'Connors for the last 13 years, told the Current. "They weren't expecting us to come out the way they did."

Indeed, not only did Liverpool beat the team that was widely considered the best in the world (led by superstar Lionel Messi and former Liverpool striker Luis Suárez), but the way in which they did it was astonishing. Liverpool outplayed Barcelona in Spain for much of the Reds' 0-3 defeat (Suárez and Messi couldn't be stopped, but Liverpool held its own) and the second leg in Liverpool looked bleak — especially considering Liverpool didn't have its two best players: Egypt's Mohammed Salah and Brazil's Roberto Firmino, both injured. But Liverpool came back with a vengeance and slaughtered Barcelona 4-0. The fourth goal was absolutely ridiculous and was an instant meme creator (go to 5:10, but I recommend watching the whole video).

“I know 'You'll Never Walk Alone' will always be our anthem, as it should be,” Walmsley said. “But this is my humble contribution, my 'thank you' to the team after such a glorious season. Usually football chants are short and to the point, but I wrote this one thinking of a music video, so I wrote a little more. This one's unique because it's about Liverpool from the specific point of view of LFC's American fans. It’s all about the passion and pride of our fans. Easy chants for the fans to remember and to make others remember that Anfield feeling, that's why I added the marching drum. Everytime I hear the YNWA chant I get goosebumps. That sound is one of the things I miss more from home.”

The video’s cherry on top is the number 96, which pays homage to the crushed fans at the 1989 Hillsborough tragedy. “I just wanted to remember the 96 fans and made a simple gesture of including them and basically never forgetting them.”

On Tuesday morning, May 21, Walmsley and his fellow Reds will be at the KENS 5 studio to show the video and talk about "Red Fever," the story of Liverpool and the game itself. And for the big game on June 1, local Liverpool fans will meet again at the Winchester to witness what they hope will be Liverpool’s sixth European Cup (the first since 2004-05), which will automatically qualify them to the club World Cup, the only trophy Liverpool has never won.

The tickets cost $10 and you can buy them here (at the time of this writing, only seven tickets were left).