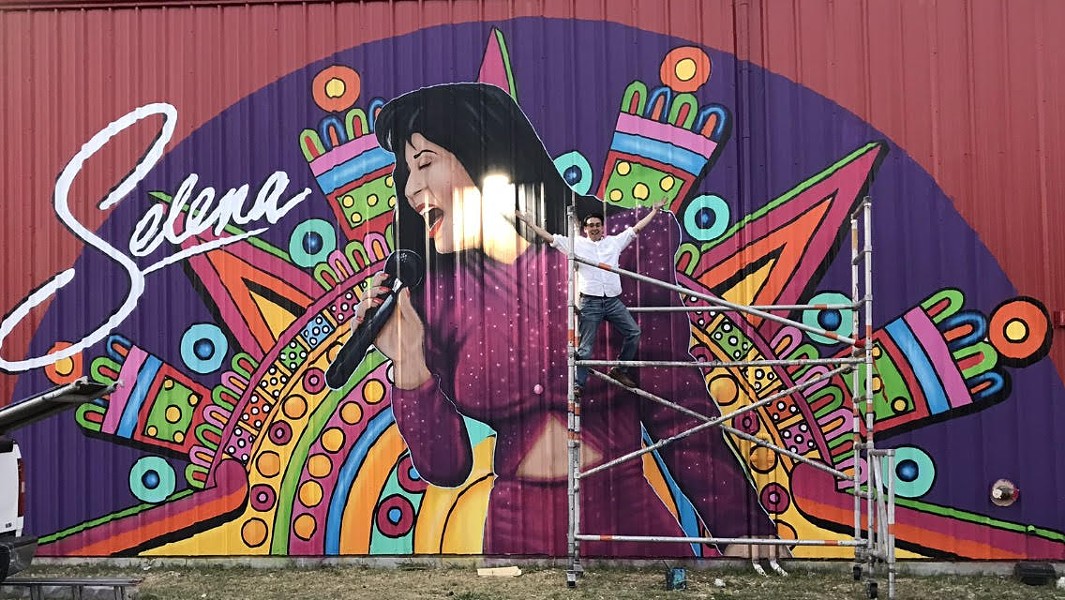 Just when you think you can't get enough Selena, the image of the Queen of Tejano pops up time and time again.

One of the newest murals dedicated to the late singer can be found on the side of the Alamo Candy building at Interstate 10 at Hildebrand Avenue. Artist Alan Calvo painted the massive image over the course of two weeks in April.

But the reason for the project wasn't just a love for Selena's music, Calvo said. He said the motivations are as deep as his own DNA.

Raised in Houston, Calvo’s father Alberto Calvo was a major Norteño and conjunto radio personality. From the mid-’90s to the early 2000s, he worked for KQQK 107.9 FM and KLVL 1480 AM.

“My mom and dad knew Selena personally since the '80s,” Calvo said. “My father being a well-known DJ in Selena’s genre is why we had a connection to the Quintanilla family … I met her plenty of times, and we knew her family so well they’d come over to the house and talk about up-and-coming new talent.”

Even after Selena’s passing, Alan said her father, Abraham Quintanilla, and his dad would still visit to talk shop.

Alan Calvo eventually moved to San Antonio to pursue a romantic relationship, but he hadn’t forgotten about his connection to the Quintanilla family or his love for Selena’s music. For the last several years, around the anniversary of her death, Calvo painted smaller portraits of Selena since she was frequently on his mind.

Calvo cited Ron Rocha as his mentor, an artist whose exhibition “Lo Que Somos” — a collection of paintings offering a new visual perspective on the Aztec calendar — was featured at Universidad Nacional Autonoma de Mexico-San Antonio back in 2014.

“I started out pretty slow,” said Calvo. “I used to do a lot of smaller portraits and I’ve always been an artist but never took it to a professional level.”

The new Selena mural has the singer in mid-belt and wearing her famous purple outfit against a colorful Aztec background. The contrast is meant to symbolize two important eras of Mexican culture, Calvo pointed out. He added that Rocha helped during the creative the process, offering minor direction over the course of the project.

“I dedicate this mural to San Antonio,” Calvo said. “[So that] no matter how much construction and building development or art on buildings gets torn down, we continue to remember where we come from.”

Calvo expects to start a new piece on the other side of the Alamo Candy building, which will feature Mexican and Native American veterans who served during World War 2.

He also might create a portrait of the late rapper Bushwick Bill.

Apparently, Scarface, who rapped alongside Buschwick Bill in the pioneering gangsta rap group Geto Boys, saw Calvo's work and asked him if he’d be willing to work on a mural dedicated to his friend.

“All I can do is be thankful,” said Calvo, whose father died last year and was a big part of why Calvo painted the mural.

“Even though my dad’s passed, I feel blessed because I feel like he’s still helping me out.”