Strobing lights and a thumping electronic track pulsed through the Paper Tiger during a recent performance by queer pop sensation Wayne Holtz. As Holtz sang, local dancer Antonio Padron, better known as Tone, channeled his energy into an onstage dance.

Spinning, kicking, dipping, twirling his arms and whipping his wrists with poise and precision, Padron used the elements of vogue — a dance style popularized in Harlem’s 1980s LGBTQ ballroom culture — as part of the performance, enthralling the crowd.

Despite those moves, Padron isn’t just a supporting dancer, though.

Padron was a crucial member of the San Antonio-based dance and art collective House of Kenzo. Although he’s since parted ways with the group, his musical production and choreography helped it land showcases at festivals including South by Southwest and Day for Night.

And last month, he dropped his first full-length collection of music, Akashas Records, under the moniker YyynOt. The 17 tracks fuse industrial, techno and ’90s house for a combination that feels violent and chaotic yet somehow controlled and deliberate.

Both his work in dance and his music are an outgrowth of the ballroom culture, which the award-winning 1990 documentary Paris is Burning introduced to a wider world. Part dance-off, part drag fashion show, Harlem balls provided a creative forum for members of the LGBTQ community sometimes excluded from New York’s wider gay culture.

“The ballroom culture is very important to me,” said Padron, 27, who’s now active in the Texas chapter of the New York-based ballroom group House of Mizrahi. “It’s made me very comfortable with my feminine side and raised my level of confidence. I’m very grateful to the icons and legends that engineered the culture.”

Even his newly released YyynOt musical collection owes a heavy debt to the thumping soundtrack of ballroom contests.

“I want my music to take people somewhere,” said Padron, who got his musical start creating dance mixes of others’ music. 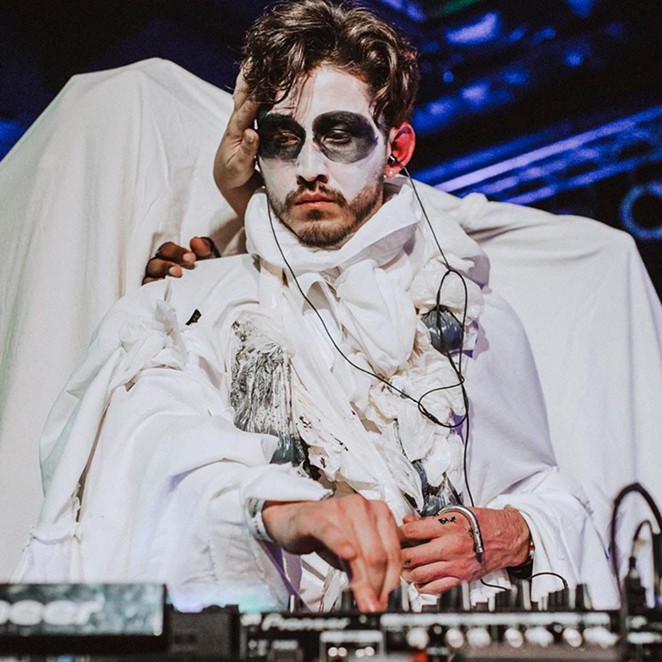 And take them somewhere it does. Listeners are carried along by a few minimal bars of electronic hand claps only to be abruptly submerged in pummeling bass thumps. Yyyn0t’s music can feel asphyxiating yet life-affirming, all at the same time.

San Antonio-born Padron graduated from Southside High School in 2009. Shortly after graduation, he met San Antonio-based dancer Karma Stylez, who’s since gone on to appear on Ryan Murphy’s FX series Pose. That show is also set in the ’80s ballroom scene from which both dancers drew inspiration.

Working as a pair with Stylez, Padron began entering dance competitions. They ultimately joined in as founding members of House of Kenzo.

Two of ballroom’s most significant mainstream touchpoints, Paris is Burning and Pose, provide glimpses into the culture’s 1980s heyday, leading many people think that it began in that era.

They’re only a century or so off.

The first documented queer ball was thrown in 1869 as a masquerade, offering a place for queer folk to congregate and cross-dress. Participants competed by emulating other genders and social classes. Some of the contests, for instance “Femme Queen Realness,” judged participants’ ability to blend in with cisgender women.

In those early years, gay people weren’t the only ones attending the balls, though. Straight onlookers would show up to watch, despite a public outcry from some who considered the events perverted and immoral.

Later, Harlem Renaissance poet Langston Hughes discussed his experience at a 1920s drag ball in his autobiography The Big Sea, calling it the “strangest and gaudiest of all Harlem spectacles in the ‘20s,” and describing “the queerly assorted throng on the dance floor, males in flowing gowns and feathered headdresses and females in tuxedos and box-back suits.”

Later in the century, after the Stonewall Riots opened up progress for New York’s LGBTQ community, Harlem’s ball culture began to shine on a community that had been overshadowed for nearly a 100 years: LGBTQ people of color.

During this era, ballroom houses popped up. The collectives, overseen by mothers like Crystal Labeija and Paris Dupree, took in queer youth of color, educating them not only on the ballroom world but daily life. Often, these youth had been thrown onto the streets by their own families.

So, the ballroom scene, especially in this era became one of the only safe spaces where queerness could be seen and celebrated, historians point out. The contests became a chance for participants to forget the hardships of the world for a few hours.

Eventually Madonna’s hit single “Vogue” debuted in March of 1990, catapulting elements of ballroom to the mainstream. House of Extravaganza members Jose Gutierez Xtravaganza and Luis Xtravaganza choreographed the song’s video after meeting the superstar in a club.

After a brief return to the underground through the 2000s, ballroom culture has reemerged in the pop culture zeitgeist, thanks to Pose and RuPaul’s Drag Race.

Drag Race incorporates elements of ballroom by using categories that each drag queen must compete in to progress to the next round. During one episode each season, the queens comedically critique each other, a phenomenon known as “reading” or “throwing shade” that plays heavily into Paris is Burning.


Back to the Future

Although, the aforementioned Stylez first introduced Padron to vogue, his interest was further ignited while watching America’s Best Dance Crew back in 2009. That season featured Vogue Evolution, an ensemble that included Malechi Williams, Jorel “Prince” Rios, Dashaun Williams, Devon “Pony” Webster and Leiomy Maldonado — all icons in the world of vogue.

“That is when I officially fell in love with vogue,” said Padron. “This is when I learned about the other side of vogue culture, and that is vogue-fem.”

“Vogue-fem” is the latest evolution in ballroom performance, which incorporates five elements including duck-walking, cat-walking, hands, floorwork, and spins and dips. Top scores are given to voguers who can move quickly and fluidly in and out of all five elements while also showcasing exaggerated feminine energy.

While Padron is fulfilled by his work in dance and music production, he’d ultimately like to make a different change by getting involved in local politics — even joining city council.

“I have a lot of things I want to see implemented,” Padron said. “Sustainable public transportation, protecting the Edwards Aquifer, shutting down all the coal plants, implementing cleaner energy, smarter development that puts our health and local ecology as the top priorities, more community gardens, workers’ rights… I could go on.”