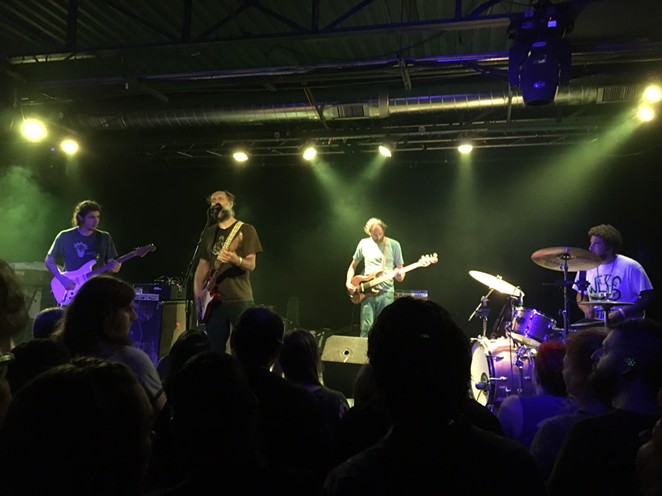 Legendary indie rockers Built to Spill could sum up their existence with a line from the song “I Would Hurt A Fly,” which popped up during the band’s extensive encore Saturday night at the Paper Tiger: “I can’t get that sound you make out of my head / I can’t even figure out what’s making it.”

The lyrics are both plaintively emotional and impenetrable. Raw feelings behind a wall of weirdness.

Built To Spill is touring to celebrate the 20th anniversary of its Keep It Like A Secret LP. Revisiting a classic album has been a boss move for a while now, but it’s not without risk. By spending time looking back, is an artist acknowledging that they have nothing to say in our current era? That they’ve joined the nostalgia band crowd?

Boise, Idaho’s favorite sons took a novel approach to the task. Most bands undertaking such efforts just play the record straight through, although a few have tinkered with the trope. Metallica, for example, couldn’t let go of playing “Enter Sandman” at the end of the set so they reversed the order of the Black Album to accommodate. Built to Spill just played all ten songs, interspersed through a 16 song set, as if to shrug and say, “Call it an album if you want.”

On this tour, the band even mixes up the running order nightly to make the point. “Enjoy the tunes, but don’t expect a straight recitation of past glories,” they member seem to be saying. “And, yeah, we’re still saving ‘Carry the Zero’ for our last song, because that’s what we’re doing.”

Even the use of “they” here is a bit of a misnomer, as Built to Spill is really guitarist-vocalist Doug Martsch and whoever else is playing with him. The group took the stage shortly after 10 p.m., launching without fanfare into “Center of The Universe.”

Martsch’s voice showed no signs of wear. His most obvious influence is Neil Young, and the group has even included Young’s “Cortez the Killer” in past setlists, complete with a massive noise jam as an exclamation point. Martsch’s real genius is bringing classic rock melody into the realm of anthemic indie rock, which he does without losing the best bits of both. He can lay down shimmering guitar solos or noisy feedback over the tightly controlled rhythm section, ably keeping the whole thing grounded.

Martsch, a strong songwriter who could probably carry these songs off as solo acoustic numbers, kept the crowd’s attention easily across songs like “Temporarily Blind” and “Bad Light.”

It was a bit odd to hear “The Plan” late in the set, as the catchy song kicks off Keep It Like A Secret, but given the audience reception, no one seemed to care. The set closed with “Broken Chairs,” and the most in-depth noise soundscape of the evening. Feedback sliced as the song peaked, then Martsch briefly thanked the crowd — the first words he spoke — and the band left the stage.

The six-song encore featured two covers, the Halo Benders’ “Planned Obsolescence” and REM’s “Harborcoat,” the latter of which sounded quaint amongst the heavier material. The previously mentioned “I Would Hurt A Fly” was a hit with the crowd, as was the show-closing “Carry the Zero,” arguably Built to Spill’s most beloved song. The band ambled backstage after nearly two hours, leaving everyone with that sound stuck in their head.