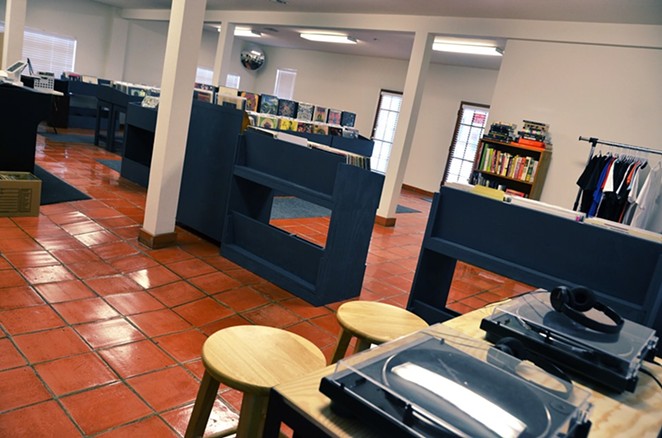 A record by Nigerian guitarist King Sunny Ade played in the background at San Antonio's Crazy Rhythms Records as a handful of people browsed its racks last week. Though there were already hundreds of records its shelves, the open room had that still-unpacking vibe. Little art or decoration hung on its walls.

Crazy Rhythms Records opened a month ago at 3617 Broadway Suite 402 in a cluster of shops along Avenue B near Brackenridge Park.

“Even before we moved here we knew that this was a good city to try this thing out," said Zeke Baker, a New York City transplant who opened the store with his twin brother Zach. "Corpus felt too small. Here, most people in the record community have been pretty friendly to us. It feels like a big enough city that we can carve out a niche and feel like we’re not stepping on anyone’s toes.”

The Bakers' parents retired a decade ago in Corpus Christi, and since San Antonio was a nearly city twins were familiar with — thanks to extended family located here — they chose it for their fledgling business venture.

Though the brothers' primary goal is to provide a wide selection of DIY and punk vinyl, they’re still figuring out what else San Antonians wants from them.

After moving from Houston to NYC in the early-’90s, the Bakers fell in love with hip-hop, including Houston's Geto Boys, and hardcore punk such as that released by DC's Dischord Records. They began collecting vinyl and selling it at punk gigs and record shows on the East Coast. During that era, CDs were the dominant medium, and few artists outside of hip-hop and punk were releasing vinyl.

Eventually, the Bakers' love for discovering led to them programming for radio stations such as East Strasburg University’s 90.3 WESS and WMUH 91.7 FM in Allentown, Pennsylvania.

“We would play King Sunny Ade next to punk rock next to dub reggae next to soul next to hip-hop. It didn’t matter,” Zeke Baker said.

Being able to play whatever they wanted kept up the brothers' interest in digging for old vinyl since they could share their finds with a larger audience.

Spending a few minutes in the shop, it's almost impossible not to find something of interest. Among its inventory were early Fugees vinyl, a black metal tape TK and an LP from indie singer-songwriter Amen Dunes.

Beyond the diversity, the store was stocked with classic albums any appreciator of music would want in their collection — David Bowie, Madonna and Wu-Tang Clan, for example. Rather than dumping bad country and mediocre gospel music into its racks — you know, the shit you sift through at vintage shops — it seemed like the brothers were actively curating their collection.

Indeed, the Bakers said they put new vinyl in the bins every day with an eye on keeping the inventory fresh — and something customers will actually want to make part of their own collections.

“We’re pricing every day,” Zach Baker said. “So our stock is never going to be stale.”

For more information and to check some of the new records going out on the daily, visit the shop’s Facebook page.