Michael Escamilla first met Daniel Johnston in the mid '80s when the cult singer-songwriter was handing out tapes of his music on Austin's Guadalupe Street to anyone willing to listen.

Escamilla, who now lives in San Antonio, hit it off with the quirky young man and recognized something magical in his homespun tunes. Magical enough, in fact, that he started covering some of them with his own band Tubular Face.

Eventually, during a Tubular Face gig, Escamilla and Glass Eye frontwoman Kathy McCarty urged Johnston to jump onstage and play in front of an audience for what was likely his first time.

"He was extremely nervous, just a nervous wreck — barely got through the song," Escamilla recalls. "But people immediately loved it. They recognized the brilliance of what he was doing and what he was saying in the lyrics."

Escamilla is among the San Antonio musicians, artists and fans touched by Johnston, who built a worldwide following through a pure, childlike approach to music and visual art, even as he fought a harrowing battle with mental illness.

"Daniel was an outsider’s outsider, sort of an extension of the Austin tradition of folks like Townes [Van Zandt], Blaze Foley and Rich Minus with the pop sensibility of Roky Erickson, and sans the alcohol patina of the former," said Jeff Smith, the San Antonio-based frontman for the Hickoids.

Smith released Johnston's "The Marching Guitars" as part of Woodshock ‘85, a double-live LP documenting that year’s edition of the Austin weirdo-rock festival. It was Johnston's vinyl debut.

"Even if you didn’t care for the lack of production or rhythmically challenged nature of [Johnston's] recordings, there was always a line or two in his songs that were identifiable to anyone in their open acknowledgment of insecurity and self-doubt,” Smith said. 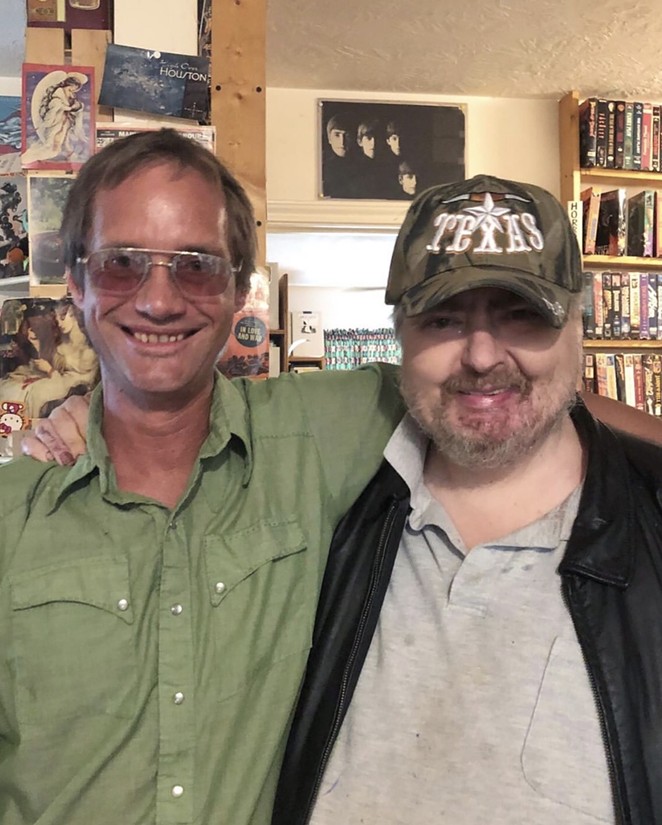 Jeff Wheeler, a San Antonio visual artist who collaborated with Johnston, said news of Johnston's passing "hit hard." He plans to dedicate gallery space at the South Side Living + Maker Spaces to Johnston's work when the site opens next month.

"Dan was an artist’s artist. His work came from the most honest, sincere, loving place that art can come from," Wheeler said. "It dealt with all that is important in a way we could all relate to. His words were beyond beautiful and will help his spirit live on. I am so lucky to have counted him among my friends and honored to have been a collaborator. I will think of him always.”

San Antonio fan Zan DuRoy met Johnston at a barbecue in the late '90s and asked him about one of his songs she'd heard on a mix tape. What she'd expected to be a typical musician interaction — full of small talk or ego gratification — turned into an immediate and surprising connection.

"He just came across as one of those genuine souls who are driven to create and express themselves no matter what," she said. "He didn't want to talk about small stuff. It was all about music and big ideas."

Tubular Face's Escamilla now works as a psychiatrist and credits exposure to Johnston's mental illness, in part, with his own research on bipolar disorder. The rawness in the music, he added, was a direct result of the artist's wide swings between despair and elation.

"Daniel became one of those people who drove me, first, to try to help others with the problem, then later, to do research into what the hell it is," he said.

Escamilla's last encounter with the singer happened on a visit to Germany, when by chance he spotted a flyer for one of Johnston's gigs. Escamilla bought a ticket and watched in wonder as the sold-out hall sang along, clearly knowing every word to Johnston tunes like "Speeding Motorcycle."

"I think was a little bit of a miracle that it happened — that he got discovered and people connected so much with his music," Escamilla said. "It would have been very easy for him just to been written off as another weird guy on the street."