This Aztec-Inspired Drawing of Selena Will Change Your Life 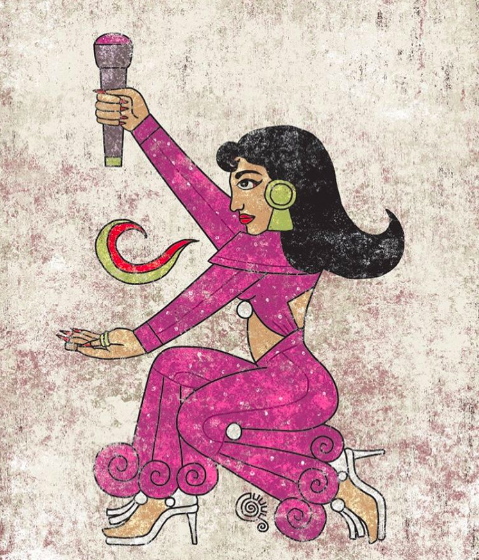 We've seen lots of renditions of Selena over the years, from the mural on the Alamo Candy building off Hildebrand Avenue to her image appearing on the Google home screen.

But a new Aztec-inspired Selena piece might be the most creative version we've seen of the Tejano legend in a minute.

The drawing was created by Jorge Garza, a Northwest Indiana-based artist who's headed to San Antonio this weekend for the first ever Big Texas Comic Con at the Henry B. Gonzalez Convention Center.

“Originally the idea was to draw pop-culture heroes as Aztec Warriors, and it has grown from there,” Garza said.

Aptly named Azteca Pop, the series features the aforementioned Selena plus other icons such as Prince, Princess Leia and Chewbacca from Star Wars and even Goro, the four-armed boss from the Mortal Kombat game.

“I drew one of Prince and was thinking of more to try and had in mind to draw Selena,” said Garza. “I had been hearing her music a lot lately and got inspired to draw her.”

T-shirts, prints and sticker packs are available via his online shop. It seems like a sure bet more will be available for purchase at his table at this weekend's convention.

900 E. Market St.
San Antonio, TX
(210) 207-8500
General Services
Map
Get our top picks for the best events in San Antonio every Thursday morning. Sign up for our Events Newsletter.