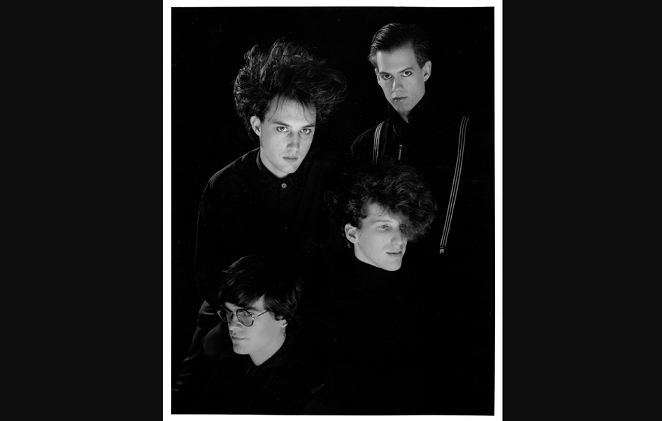 In case you missed it, the post-punk band — which the Current profiled some three decades ago in one of its first issues — will do one more gig, this one at Paper Tiger on Halloween.

For the show, Lung Overcoat — made up of keyboardist Charles Gruber, guitarist Mark Semmes, drummer Jeff Hoskins and bassist-vocalist Chris Smart — will open for Chameleons Vox. The headliner is the latest manifestation of U.K.-based The Chameleons and includes original bassist-vocalist and songwriter Mark Burgess. U.K. post-punk group Theatre of Hate and Jay Aston, an English singer-songwriter formerly in Bucks Fizz, will round out the bill
“Here's the trippy part,” said Lung Overcoat's Smart. “Lung Overcoat was booked to open for the Chameleons in SA back in November 1986. They cancelled the tour after their tour manager was hit and killed by a cab in NYC. So, now, 33 years almost to the day we're gonna play that show."

Formed under the name Platform of Youth in 1981, the band eventually assumed the moniker Lung Overcoat a couple years later. The group's synth-driven sounds were moodier than a goth teenager fresh out of eyeliner and until its 1986 breakup set a regional high-water mark for icy-yet-danceable cold wave.

Don’t get your hopes up about a lasting reunion though. Smart stays busy performing and writing with art-pop singer Chrysta Bell. What's more, he and his bandmates are all in their 50s now, so unless someone pays them a lot of money to keep playing shows, this is just a one-off.

“This is likely the only other show we will ever play, as we are definitely not 'getting the old band back together,’" Smart said.