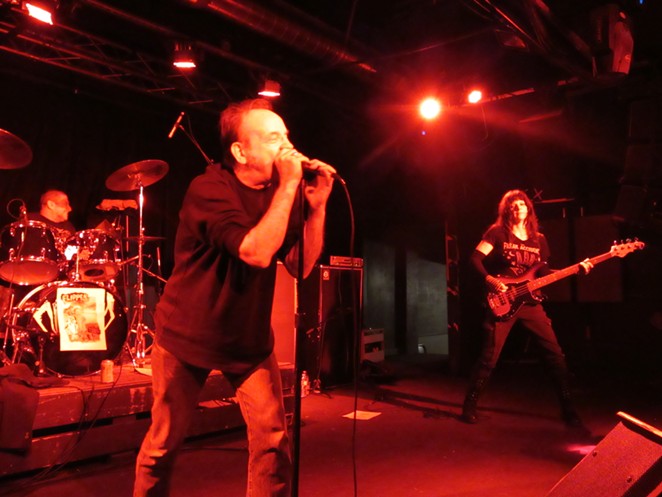 It's a safe bet that no member of Flipper's original lineup spent as much time crowdsurfing as current frontman David Yow did Friday night. But that only added to the sense of chaos that's long been the band's calling card.

The influential punk act — known for a dirgy, wall-of-sound aesthetic that served as a blueprint for bands such as the Melvins — headlined San Antonio's Paper Tiger as part of its 40th anniversary tour. The band undertook the trek with Scratch Acid and Jesus Lizard frontman Yow subbing for its original singers and lyricists, one now dead and the other retired.

After a set of by-the-numbers punk by Noogy, Austin's We Are the Asteroid — an outfit made up of veteran weirdo ensembles Ed Hall and the Pain Teens — prepped the crowd for the insanity yet to come with a set of riffy post-punk fueled by stop-on-a-dime musicianship and quirky humor.

San Francisco punk pioneers the Avengers were up next. The band, reunited decades after its '77-'79 heyday, stormed through a set of speedy numbers, including "We Are the One," an anthem that helped set the template for U.S. political hardcore. Singer Penelope Houston shook her head in time with the music while new drummer Dave Bach added Keith Moon-inspired embellishments to the simple but effective tunes.

The band's four-on-the-floor approach was a world away from that of the headliner. Even so, the crowd gave it a warm reception.

Within a minute of Flipper lurching into its opening number, "The Lights, the Sound, the Rhythm, the Noise," Yow launched himself into the crowd, losing the mic and letting an audience member hoarsely shout along. It was a maneuver he repeated throughout the set, seeming to spend as much time surfing above heads as he did onstage.

Guitarist Ted Falconi coaxed jet engine noises from his amp, his nest of gray dreadlocks pinned back with chopsticks, while bassist Rachel Thoele held down the rumbling low end, looking vaguely amused by the unfolding disorder.

While Yow and Thoele are replacement members of Flipper, both seemed a natural fit for its brand of stumbling insanity. The singer fished one beer after another out of a 12-pack of Pacifico he'd set on drummer Steve DePace's riser. A sound man's nightmare, he dropped the mic onto the stage almost as frequently as he spat up blobs of white phlegm and wiped his nose on his shirt.

He tore into the anti-war epic "Sacrifice" laying atop the audience, spitting the lyrics as if he'd just received a draft notice. Instead of singing along to the existentialist lament "Ever," he launched into a diatribe about why he could never repeat the line "Ever look at a flower and hate it?"

All the while, the band's churning racket seemed to alter any sense of time and place, the lengthy, turgid songs eventually blurring together. With Falconi's guitar gurgling like a cement mixer, Thoele's bass locked in with DePace's drums to become the only sinew preventing the whole thing from disintegrating into pure noise.

During the closing number, the repetitive and self-consciously idiotic "Sex Bomb," Yow pulled a dozen or so people onto the stage, passing the mic so they could shout along with the tune's only line: "She's a sex bomb, my baby, yeah."

By the time the nearly 10-minute song ground to a close, it was apparent that, even missing half its original members, Flipper remains a dangerous, mind-altering drug.