Controlled Chaos: Pinko’s New Album You and You is a Leap Forward in Texture and Dynamics 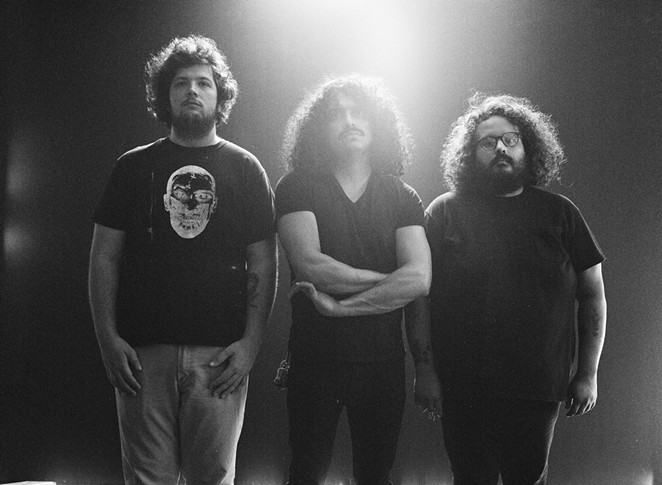 San Antonio’s Pinko is back with a new album, You and You, that pushes the trio into new sonic territory that tempers its hammering noise rock a dose of subtlety.

Composed of guitarist-vocalist Guillermo Alejandro Mendez, bassist Jared Ismael Flores and drummer Luke Zachary Mitchell — the latter of which joined at the end of 2017, Pinko write noise rock that could serve as a perfect soundtrack for the dawning apocalypse.

You and You, the band’s fifth release, is a big step forward in the songwriting department. It showcases more texture and dynamics, painting a more vivid picture of what Pinko is trying to express — which Mendez says the duality of light and darkness.

“The album is essentially a really simple play on Yin and Yang,” Mendez said. “Honestly, if there was anything that stretched over the entire record, I feel like we’ve done a much better job of loud-quiet dynamics. … We’ve always gone a million miles an hour, and a specific change since we’ve gotten Luke is that we’ve all been able to go a little softer and then even heavier — and that’s something we’re super proud of.”

The album’s opener — also its title track — lurches the band into a whirlwind of Jesus Lizard-inspired chaos punctuated by moments of metallic hardcore reminiscent of Norma Jean. The frenzy isn’t uncontrolled, however. The band unleashes on their instruments like savage animals joining a battle royal. Guitar distortion, bass rumblings and drums hits topple over one another before being harnessed back into synchronicity. The music is heavy and loud, and the mix is damned near perfect.

Pinko will tour the new record through May of 2020, heading up the West Coast through Seattle for two weeks before then looping into the Midwest for its closing week. The band will also play an album release show on Friday, December 20, featuring The Grasshopper Lies Heavy, Vampyre, Exhalents and Rats.