On Pause: Live Music Is Slowly Returning to San Antonio, But Don’t Expect Concert Tours or Big Productions Until 2021 There’s some good news for music fans as the economy reawakens. Namely, that live shows are starting to return to San Antonio.

But there’s also this: touring acts and large-venue performances probably won’t come back in earnest until 2021.

“Most of the promoters we’re talking to are looking at the 2021 calendar year,” said Casey Heverling, general manager of San Antonio’s 18,000-seat AT&T Center. “We’ve still got some things on the books for late summer or fall. We’re assuming those could go forward unless we hear something different, but every day we hear something new and have to adjust.”

Promoters have already pushed top-drawing tours, from Taylor Swift and Blake Shelton to Rammstein and Rage Against the Machine, into next year, and cancellations have become so common that industry trade pub Billboard maintains a running online list of them.

But it’s not just major acts pulling withdrawing from the road. Bands that play halls and large clubs are also waiting until 2021. In part, that’s because states are reopening at a staggered schedule. California and New York, essential stops on nationwide jaunts, are taking the longest time to reopen, so booking for the fall just doesn’t make sense.

“If every three days your tour takes you someplace where you can’t book a show, you’re going to say ‘Let’s just push this back until February of next year,’” said Graham Williams, owner of Margin Walker Presents, which books San Antonio’s Paper Tiger, among other Texas venues.

Even the agents who haven’t scrapped fall and winter dates on Williams’ books are securing backup options well into next year.

“Everyone’s landing on top of each other in the spring,” he said. “Every other day on the calendar is booked.”

Despite the cancellations, some San Antonio venues are starting to book local acts again, although in fits and starts.

Restaurants and those with outdoor space, such as Loopland venue Anchor Bar, were among the first to return. Restaurants were able to expand their capacity to 50% under state orders, while bars are still operating at 25% capacity.

Even so, auditorium-sized spaces such as the Tobin Center for the Performing Arts are still awaiting a green light from Gov. Greg Abbott before they begin staging shows again.

Fitzgerald’s Bar & Live Music Venue was among the first SA bars to present love music once the state cleared them to return to return. It held the fifth annual Memorial Day Metal Fest shortly after the getting its all-clear from the state.

The venue distributed wristbands at the door to ensure it didn’t admit more than 75 audience members, per occupancy rules set by the state. It also set up hand-sanitizing stations and moved benches in front of the stage to prevent dancing and maintain distance between the performers and audience.

Fitzgerald’s co-owner Sharon Perkins said she didn’t have much choice but to resume booking after she reopened. Drink sales pay the bills at venues such as hers, but live music brings folks through the door.

“If we didn’t start doing music again, I don’t think we’d be around much longer,” she said. “Even if you work out a deal with the landlord, they’ve still got their own bills they’ve got to pay.”

But not all music venues are in a position to reopen. Many simply have too much overhead to run lights and sound for a handful of audience members. Others worry about the liability and safety concerns of staging multi-band bills again.

Those tough choices come as the National Independent Venue Association estimates that 90% of its members don’t have enough cash to last more than six months without assistance. The recently formed organization is lobbying lawmakers for federal assistance to weather the crisis.

“Music venues are the first thing to close and the last to reopen,” he said. “You can’t just reopen like you’re a clothing store. I mean, what we do is mass gatherings.” 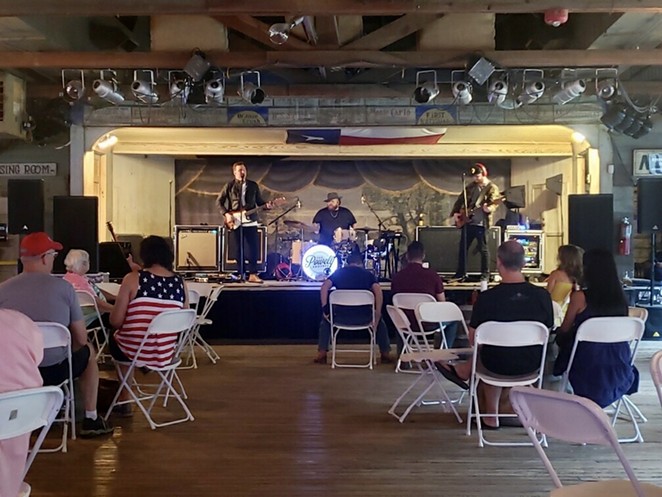 ‘This Will Be Watched’

Bands, clubs, promoters, agents and fans are all watching the baby steps of venues bringing back live music. If they can pull it off, confidence will build and more gigs will return, industry insiders say.

“Because Gruene Hall is such a legendary venue, this will be watched,” Tolar said. “People want to see for themselves that audiences are capable of going out and having a good time and behaving themselves.”

The Powell Brothers recently dropped a new single and are continuing to book gigs around the state at seated venues. However, Tolar concedes it could be a while before the act is back to its pre-pandemic schedule of gigging three nights a week.

The slow build for live music is likely to hurt most for performers recently signed to big labels or working to build quick momentum, Tolar said. But those who did their time on the road will find ways to connect with audiences while they wait for larger venues to reopen.

“The bands that did the time and built relationships around the country are going to be able to go back to the smaller venues where they got their start,” he said. “Instead of doing one big gig, maybe they do three- or four-night stands.” 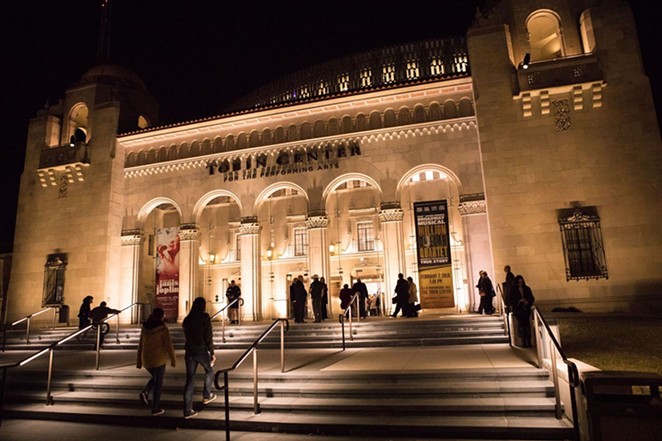 Even so, those in the live music business say audiences should be ready for a different experience when they return to venues — at least for the time being.
Michael Fresher, president and CEO of the Tobin Center, wants to reopen in time to restart the venue’s outdoor movie series in July. However, he said large-scale tours aren’t something that will come back quickly.

Instead, the Tobin’s first shows back will likely for solo performers, comedians and lecturers — acts with lower guarantees and smaller stage requirements. What’s more, the venue will use an automated system to sink seats into the floor to create larger, safer spaces between concertgoers.

While the approach will mean a different experience for ticketholders, the Tobin simply can’t survive indefinitely without bringing audiences back.

“If this goes on for a year, we’re going to have a problem,” he said.
Corey Cowart, executive director of the San Antonio Symphony, which cut short its season due to the pandemic, said he’s confident audiences will return. However, they must be ready for a new kind of concert experience.

“There’s a very strong likelihood — I’d say an 80% chance that live music will feel substantially different through the rest of this year, maybe even beyond,” he said.

Although the symphony plans to kick off its 2020-21 classical season in late September, details are fluid due to ongoing public health concerns. Depending on how things go, it’s considering options such as playing with smaller configurations or performing outdoors.

“We’re not going to be onstage until we address all the health and safety concerns, but we also have to understand what our audience is thinking,” Cowart said.

Deepening the pain, the live-event shutdown came as San Antonio and other cities were experiencing a concert boom. The AT&T and Freeman Coliseum, for example, hosted a dozen of last year’s 20 top-drawing acts, compared to just five in 2014. Smaller venue owners and promoters said they also were experiencing strong years.

When the pandemic hit, San Antonio native Ryan Brummett was forced to relocate back home from Brooklyn. His company, Overrun Booking, had expanded its roster to 30 bands, and he was working in partnership with Netflix to kick off an ambitious traveling punk festival.

While the setbacks are disappointing, Brummett said he’s confident audiences still hunger for live music. He expects fans to take advantage of a smorgasbord of gigs once touring resumes next year.

“I know people who run record labels, and they’re telling me sales are good,” he said. “People are still buying music and merchandise through this thing. The interest is there.”

While there’s pent up interest, Heverling of the AT&T Center isn’t counting on a quick rebound. For one, many are still going to be wary of mass gatherings, regardless of the safety precautions that venues take.

What’s more, layoffs and lost income have cut deeply into people’s disposable income. While Heverling said some artists are likely to scale back ticket prices in response, many fans will have no choice but to cut back on entertainment spending.