For those who didn't get enough of Chicana punk quartet Fea during its recent live-streamed tribute to riot grrrl groundbreakers Bikini Kill, fret not. The SA-based band's got another tribute performance on the way — and, as with the previous, it will deliver the lyrics en español.

Those with even a rudimentary grasp of Spanish have likely figured out the group's performing a Spanish-language tribune to Joan Jett. It's also scheduled to play some of its own tunes, hold a Q&A and pay a birthday tribute to members Phanie Diaz and Sofi Lopez. 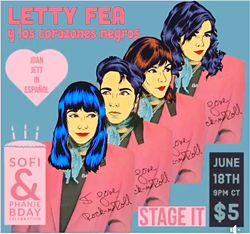 "You don’t want to miss the show!" Fea teases on Facebook. "Who knows who will be there?"

Does that mean Jett herself?

Consider it a possibility. After all, the legendary rocker has not only been a source of inspiration for the band but also a mentor. Fea released its sophomore album No Novelties late last year on Jett’s Blackheart Records, and Jett championed Girl in a Coma, the outfit the Fea spun off from.

The show will start at 9 p.m. CST and costs $5 to view. Information and virtual tickets are available online.