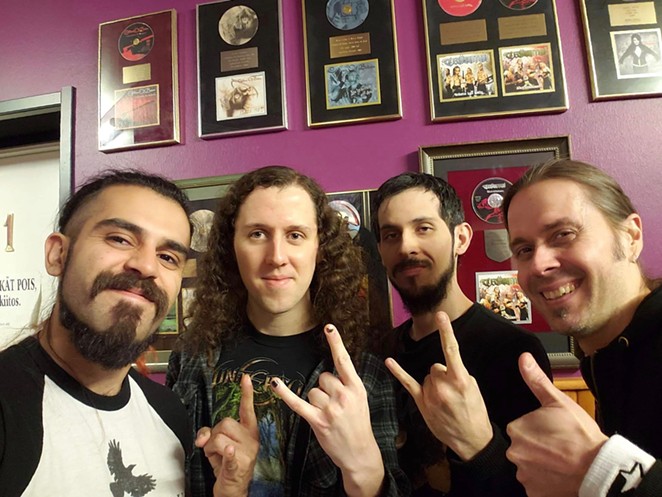 Plenty of bands dream of working with one of the biggest names in their musical genre, but San Antonio’s Ӕternal Requiem grabbed opportunity by the balls made it happen.

With ambition, perseverance and the help of an online fundraiser, the metal band flew to Finland early last year to record its sophomore album Rise with Anssi Kippo, the producer known for his work with prominent melodic death metal acts including Children of Bodom, Ensiferum and Insomnium.

Ӕternal Requiem, formed in 2012, built a rep in the San Antonio music scene for its folk-influenced take on power metal, but vocalist and lead guitarist Austin Zettner said the band was determined to take a major step forward when recording its second album.

The group had been in contact with Kippo on Facebook as far back as 2014, but it wasn’t until January 2019 that all the pieces, including an Indiegogo fundraiser, fell into place and the members made a trek to the country purported to top the world in metal bands per capita.

Funding the trip to Finland was only the first part of the challenge, however. Their time at Kippo’s Astia-Studio in Southeast Finland wasn’t exactly a walk in the park.

Kippo, who seldom works with U.S. bands, refuses to use digital recording technology, instead focusing on vintage analog equipment. That throwback approach tends to yield warmer, more natural-sounding recordings, but there’s a catch: it’s harder to scrub mistakes from analog recordings, so bands need to be tight and well-rehearsed.

Complicating matters, the band — which also includes rhythm guitarist John Catts and bassist Semir Özerkan — worked with a Finnish session drummer with whom they’d never played until arriving in the country.

Zettner described the process as “not an easy experience,” adding that it was “almost like being in school or something.”

Kippo challenged the band in a way they’d been pushed in no other recording session. He demanded more emotional vocal takes and sometimes pushed the band to rethink their approaches to the material on the fly. He also made the musicians do repeated takes until they landed on perfection.

“We really learned how to relax and find the groove,” Zettner said. “It’s like this Zen-like experience where you lock in with your bandmates.”

Wanting to share the knowledge the band gained on the once-in-a-lifetime trip, Zettner filmed the process. During the pandemic stay-at-home order, he assembled an hour-and-a-half documentary in hope other musicians can take something away from it.

While it’s clear during the film that the band is getting something from the experience, there are moments when the frustration of working with the demanding producer shows on their faces.

“I don’t know if it turned out to be a huge commercial success, but we learned so much,” Zettner said. “And that’s a big part of why I had to finish this documentary. I wanted to share all these lessons that musicians are missing out on.”

With COVID-19 putting a halt to live music, Ӕternal Requiem has been in a holding pattern. But that’s not stopping Zettner from keeping busy with other musical projects, including producing a release of unfinished music by Jesse Lopez, the late guitarist of San Antonio thrash metal band Aggravator.