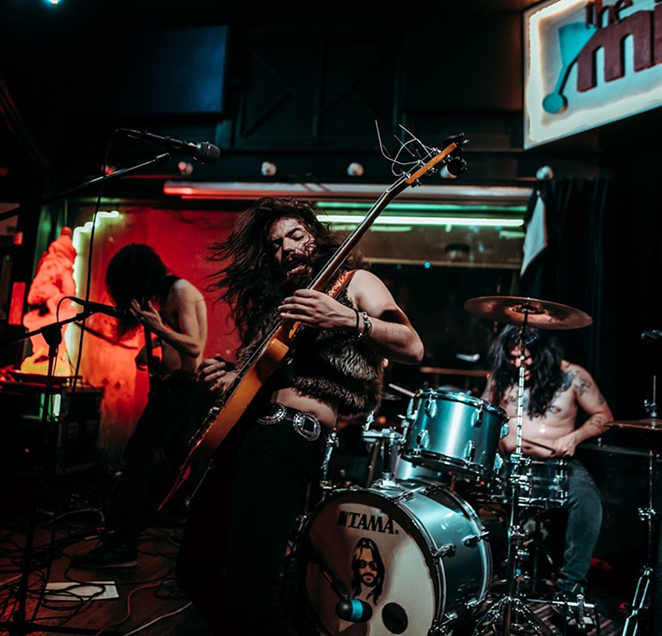 From the grunge-era wash of Soundgarden clones to the present-day glut of soundalike stoner rock bands, plenty of acts make the incorrect assumption that channeling ’70s arena rock swagger is just about closing your eyes and riding a cool riff.

Turns out, that’s only part of the job.

The bands of that era that stood the test — whether we’re talking Sabbath, Led Zep, BOC or Deep Purple — knew a thing or two about songcraft and hooks. They also were unafraid to throw a little variety into their sound.

San Antonio’s Jason Kane & the Jive get that. And it’s abundantly clear on the trio’s newish self-released album Soggy Noggin.

While the COVID-19 pandemic kept the band from giving the disk the bleary-but-beautiful release party and promotional tour it deserves, it’s nonetheless out there and worthy of some love — even from folks normally wary of retro rock.

The band’s core is made up of singer-guitarist-keyboardist and principal songwriter Kane plus bassist Jason Nick Jive, augmented by rotating drummers. While only in their mid-20s, the pair possess a songwriting maturity and understanding of their source that suggest they could have been flogging the road opening for Uriah Heep back in the day.

Some of that no doubt comes down to Kane growing up under the tutelage of a dad who played in Chicago metal bands and a mom who turned him on to some of the mellower sounds of the Me Decade.

Beyond being versed in the classics, retro rock is hard to pull off, though. Good retro rock anyway. It tends to become an all-too-easy game of spot-the-influence (Greta Van Fleet, anyone?) or an exercise in Camaros-and-cowbells cock rock cliches.

The key to Soggy Noggin’s success is the trio’s ability to synthesize those influences of yesteryear and shape them into something new — something that sounds like, well, Jason Kane & the Jive.

And, truth be told, a little kick-ass musicianship helps seal the deal.

Tracks such as the opener “Machine of Dreams” and the knotty “Chica Boom” deliver the expected boogie and bombast, replete with snappy rhythm section workouts and blazing guitar solos. Unlike a lot of bands mining this territory, Kane can actually sing, and his clear and soulful voice is a good match for the material.

If that’s all the band could deliver on, they’d still have crafted a worthy release. But where the album actually slips into the sublime is on its surprising side trips into psychedelia, soul and prog — none of which come across as twee or forced.

“Smooth Operator” — no, not a cover of the Sade song — evokes the chunky organ chords of the Doors’ “Moonlight Drive” while weaving in the jazzy, sax-driven elements of Traffic’s “Low Spark of High Heeled Boys.” And that’s just before it darts into a double-time middle section reminiscent of vintage Gentle Giant.

With an assist from the Top Shelf Brass Band, the album closer “Bossman” nestles into a greasy groove somewhere between Humble Pie, Little Feat, and Sly and the Family Stone. A genuinely funky middle breakdown pulls it all together and almost makes you forgive Kane for momentarily quoting a Steve Miller lyric.

While most live support for Soggy Noggin is off the table as the pandemic grinds on, Kane and Company have holed up to work on a fourth album. Still, based on the band’s willingness to work the road — it spent two months touring last year — it’s hard to imagine the dudes sitting still once it’s safe to get back to the clubs.

Given Jason Kane & the Jive’s relative youth and strong work ethic, perhaps the most exciting thing about Soggy Noggin is the suggestion that there’s still room to grow, that even better work is yet to come.

But even if that’s not the case — doubtful, sure, but always a possibility — the album is plenty rewarding in the here and now, yielding new rewards with subsequent spins. And that’s not just the riffs talking.