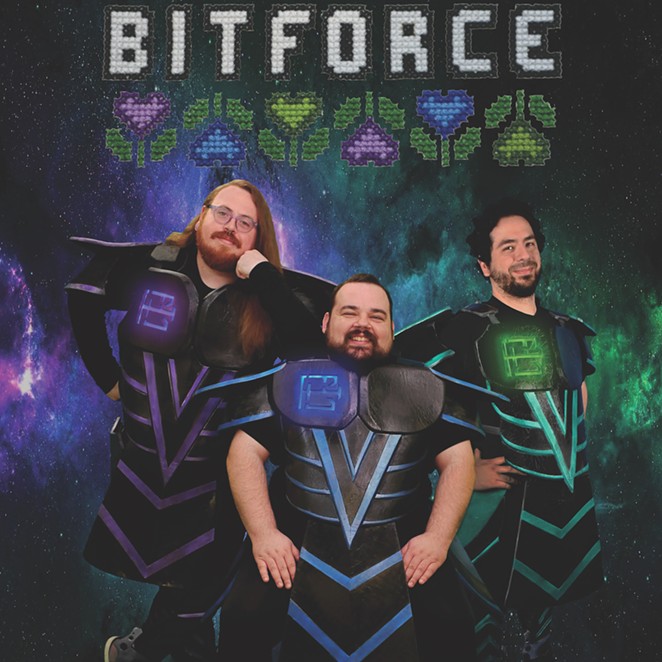 San Antonio’s self-described nerdcore outfit Bitforce has made a triumphant return with an eponymous eight-song album released this week on Bandcamp.

Known for combining the raw aggression of metalcore with nostalgic melodies from classic video games, Bitforce has emerged as a leader in a surprisingly large scene of Alamo City acts who reference video games, anime and other nerdy obsessions in their music.

That local community's stature has grown so much that fellow nerdcore outfits including Mariachi Entertainment System — yes, a mariachi group that plays covers of video games themes  — receive invitations to perform at gaming conferences across the U.S.

For its new album, Bitforce has slightly altered its formula. Instead of using melodies or themes from video games and the like, the band used its songs to spin a fictional world into existence.

“Our past releases have been arrangements of music from video games, anime, movies and TV shows,” drummer Toph Lawrence said. "We really wanted to put in the effort to create our own universe and tell a unique story using our art. This album is that vision come to life.”

The release starts off with “Open the Rift,” its shimmering synth-like sounds lulling the listener into a trancelike state. Then, in Bitforce fashion, pummeling drums and groove-heavy guitar riffs charge into the mix, balancing the warm atmospheric vibrations with aggressive metal sounds.

The third track, “Dendrosicyos,” throws listeners a curveball by showcasing a softer edge. It begins with a repeating guitar melody, then featured singer Charlotte Carian of San Antonio’s Abyss of Bliss joins, crooning over hard-hitting drums and melodic guitar work. The result is an almost post-hardcore sound.

The hip-hop influenced “Press Start to Continue” features singer Professor Shyguy and rapper Mega Ran, the latter a prominent name in the nerdcore and rap world. Bitforce have toured with Mega Ran, serving as the emcee’s backing band.

The entire album is well-rounded and serves as a smart continuation of the journey guitarist Joseph Devine, bassist Marc Lopez and drummer Lawrence began with their first release in 2013. The material's diversity will also give fans a new appreciation for the trio’s writing and playing skills.

“All of the music is based off of a graphic novel that we're writing about our journey from [being] regular people to becoming superheroes,” Lawrence said of the concept tying the songs together. “I wanted to create a universe which all of our friends and fellow nerdcore artist[s] could exist within. This album lays the basic framework for that universe.”

While many music venues are shuttered by the pandemic, Lawrence said he and the band are hungry to hit the road and perform the new music live.

“We would love to tour for this album,” he added. “Our last tour with MC Chris was so successful, and we made a ton of new fans across the country. So, we'd love to bring this new material out to them.”