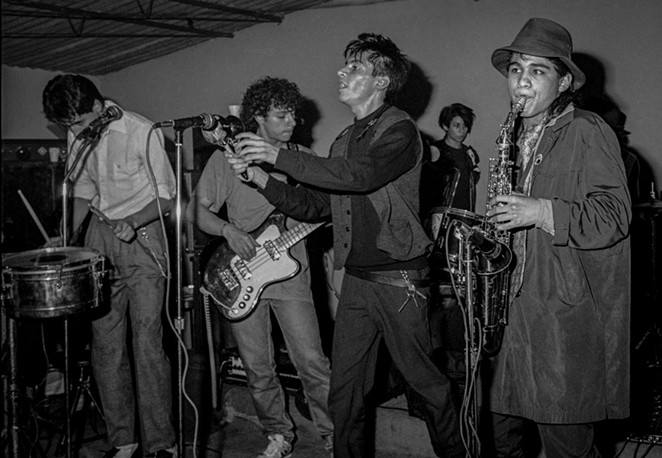 It only took a promotional poster for the new Netflix rock en español documentary Break It All to make rockeros worldwide mad as hell.

“Why isn’t [enter your favorite band] mentioned?” some asked. “Why is [enter a band you don’t like] in bigger letters than [enter band you like]?”

And the trailer for the six-part series, which began streaming late last month, didn’t help much either.

“Where is Caifanes?” Mexican fans inquired. “What are Mon Laferte and Maná doing there?” complained those who don’t consider the Chilean songstress and the immensely successful Mexican band to be “rock.” “Where are Los Shakers?” asked Uruguayan fans, offended by the fact that the band’s greatest hit was named “Rompan Todo” (“Break It All”), clearly the inspiration for the documentary series’ title.

For each person praising the series, another is lambasting it — all based on their personal taste or interpretation of history.

Despite those grievances, Break It All is the most complete and professional-looking and -sounding treatise on Latin American rock en español to date. Previous efforts had primarily focused on a single country.

What Break It All isn’t meant to be is an encyclopedia of rocanrol, as many Latin Americans call the genre.

“There are 100 artists in [the series] and thousands out,” said Brooklyn-based Argentine Nico Entel, the series’ showrunner and producer. “The other way around would’ve resulted in a very boring series.”

He’s right. Break It All, which features 127 songs and lots of never-before-seen photos and footage, is anything but dull.

Each of the six episodes covers roughly 10 years of rock en español, starting with Ritchie Valens’ 1958 song “La Bamba” (the genre’s first influential hit) and the Mexican bands of that decade who translated early rock ’n’ roll hits into Mexican slang. Among those acts were Los Rebeldes del Rock, Los Teen Tops and Los Locos del Ritmo, who influenced the fathers of Mexican and Argentine rock.

The series finishes by exploring the early fusion of electronica and native sounds including cumbia, banda and norteña created by artists such as Mexico’s Nortec Collective and Colombia’s Bomba Estéreo in the late ’90s and early ’00s.

A handful of bands from Spain are also included in the late ’80s-early ’90s segment, as is the impact of MTV Latino in the genre’s internationalization.
The present-day’s exclusion comes down to it being too early to assess, according to series director Picky Talarico, also an Argentine: “We need more perspective. Ask me that 30 years from now.”

Through it all, Break It All shows the friction between rockeros and governments, mainly focusing on major markets such as Mexico and Argentina and secondary ones like Chile, Peru, Colombia and Uruguay.

“The hardest part was to show 60 years of history in six hours,” Talarico said. “Rock [en español] has so many important parts that every time we had to leave something out it was very painful.”

Two Texans had to be cut: the late Baldemar Huerta (a.k.a. Freddy Fender), who recorded a Spanish version of “Don’t Be Cruel” in 1957 but failed to have an impact in Latin America, and San Antonian Gloria Ríos (1928-2002), whose 1956 “El Relojito” — a cover of Bill Haley’s “Rock Around the Clock” — marked the first time a woman recorded rock ’n’ roll in Spanish.

“We couldn’t secure the rights to the songs; it’s complicated,” Talarico explained. “It was a shame, because seeing her dancing and singing that song on TV is a hallucinating experience.”

The main problem with Break It All is its tagline: “The History of Rock in Latin America.” The series doesn’t include Brazil at all, which deserves its own series, and it’s obviously not the whole story of the genre — only one that’s pretty darned comprehensive and error-free.

A key criticism some have leveled against the series, paradoxically, is one of the best things about it: the ample time given to Rompan Todo’s Argentine producer Gustavo Santaolalla. Full disclosure: Santaolalla wrote the intro to my book and I wrote liner notes for albums by Bajofondo, a band he leads and produces.

It’s true that Santaolalla and Café Tacvba, a band he also produced, are the primary talking heads in the series, but is that such a bad thing?

Santaolalla, who won a Golden Globe for composition and two back-to-back Academy Awards — something only achieved by two others in history — is one of the most influential artists and producers in rock en español’s history. What’s more, Café Tacvba is the most critically acclaimed Mexican rock band in history. In 2012, Rolling Stone chose 1994’s Re, the group’s sophomore album, as the best Latin rock album in history.

But to dismiss Break It All as the “Santaolalla Fest,” as too many have claimed, is not supported by facts: out of 226 artists featured or mentioned in the series, he only produced 13, and many of those are featured in the series with accompanying music he had nothing to do with. So, screw that.

The film itself has remained in the Netflix Top 10 in virtually all of Latin America since its December 16 release, according to data from FixPatrol.com, and it’s continuing to inspire ferocious debates on social media.

If anything, Break It All is a terrific introduction to a genre that not only refuses to die but is seeing new success thanks to streaming. Especially among female audiences.

“The other day I read a statistic [indicating] that the sale of electric guitars had dropped a lot, but the number of women buyers had gone up,” said Uruguayan Juan Campodónico, from Peyote Asesino, Bajofondo and Campo fame.

“Rock is in quarantine, and the vaccine is Latin American and has a woman’s perfume,” Santaolalla said.