10 Costumed People You Meet on Halloween 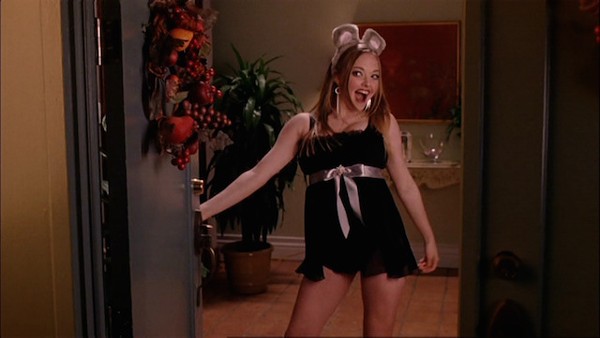 1. Animal Ears
We’ve all seen Mean Girls and we know the epidemic that has been caused due to its success. Men and women all around the country will be showing up to their local bars and house parties with some form of animal ears, but with only the finest of underwear on to complement them. You better believe that if someone is willing to brave the cold with little clothing that they’re ready to party.

2. The Public Servant
The public servant is always a classic person to hang with on halloween, because not only will they be great to take pics with, but they may even have a pair of handcuffs. It’s even better when they step it up a notch and become the sexy public servant. “Put out a fire," you say? More like they’re starting one.

3. Blowing Up
Standing inside of an oversized piece of plastic for hours on end while letting a fan inflate it sounds fun, right? The person wearing the blow-up costume thinks so. It’s hard enough trying to order a drink at the bar or getting to those Jell-O shots at a house party without having to compete with all of that material and the noise of the fan. Please ask them to deflate their costume before they deflate the fun.

4. The Celebrity Couple
There are two kinds of celebrity couples: one that is right and one that is ratchet. The right kind of celebrity couple really turns it out with a killer Kimye or a Prince William and Kate combo. These kids give us life. Then there’s the couple that decides to show up like Whitney Houston and Bobby Brown during the rough years. If they’re showing up as Whitney and Bobby, chances are they’re gonna leave like Whitney and Bobby. Avoid THAT.

5. What Are You?
It’s the last minute. They didn’t think this through. It’s already time to go out. This causes a chain reaction where somebody tosses on a bunch of random clothing in a last-ditch attempt to seem like they’re in the Halloween spirit. This also leads to everyone asking, “What are you?” Don’t get me wrong, these folks at least cared enough to try, unlike the next person…

6. I’m Me
People who go as themselves on Halloween are literally the ultimate Halloween buzz-kill. How are you NOT going to take advantage of the one night in the year you can literally go out as Hipster Jesus without it even being questioned? The second somebody says, “I’m me” you better run to the nearest two-man horse and take a shot, because you don’t need that kind of negativity in your life.

7. Wait, Why?
Listen, I love cosplayers, because I wish I had the talent and skill to bring so many awesome characters to life. With that being said, Halloween is not the time to be running around town in an intricate costume of Luminara Unduli from Star Wars. These folks can still do the force justice with a classic Yoda costume instead of making everybody say, “Wait, why?”

8. I’m a Ghost, Duh.
They may look like a Klan member, but they are in fact a ghost. These are the folks that will spend the entire night acting a fool, because you can’t see their face. Chances are that they didn’t want to do more than grab a pillow case, cut some holes, and get to the bar. Being that I am actually broke, I can support this budget-conscious guy/girl as long as they don’t get too crazy.

9. The Busted Witch
There are those ladies with an amazing witch costume and I’m talking “put a spell on you” amazing, but we all know that’s a hard costume to pull off. The busted witch is that friend that tries try to show up in some ripped tights, wild hair, and a hat that smells like funk. Be careful, because you may think the busted witch is speaking sweet nothings, but she’s probably putting a hex on your drink.

10. Bye, Felicia
There is always that guy who shows up to the bar/party by themselves while not in costume trying to turn-up like it’s a normal night out. Even though you don’t know him, he’s going to try to photobomb you, take one of the shots you ordered for your friends, or just awkwardly stare. When he tries to engage anyone in your group just say, “Bye, Felicia.”