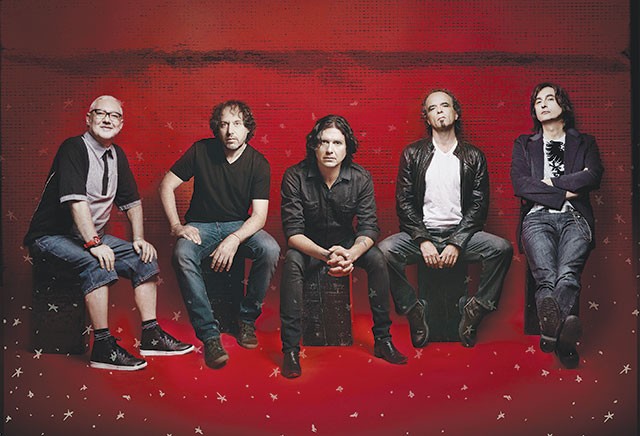 Let’s face it: cumbia (traditional or not) can be really cheesy. So thank God for the fusionistas. The good ones, that is.

What follows is only my personal top 10 and a good representation of artists who pushed the envelope and went beyond the usual, crowd-pleasing cumbia formula. Not enough Colombian artists? Probably, but I didn’t think of countries when creating this list—only songs, the ones that most touched me.

So sit back and enjoy.

1 - “Eres mi Canción” (Rubén Blades, Panama)
This is one of the best Blades songs he never wrote. Composed by accordionist Oswaldo Ayala, it was included in Blades’ Grammy-winning La Rosa de los Vientos (1996), Blades’ only album fully devoted to covers. If Ayala’s accordion lines don’t pierce your heart, yours is made out of stone.

2 - “Yo Tomo” (Bersuit Vergarabat, Argentina)
After nearly breaking up due to drug abuse, Argentina’s Bersuit came back in the ’90s with a vengeance: an explosive hard-rock riff that turns into a cumbia-rock, topped by a killer “I drink so that I don’t fall in love/I fall in love so I don’t drink” chorus.

3 - “Kiko and the Lavender Moon” (Los Lobos, U.S.A.)
One of the highlights of 1992’s Kiko, Los Lobos’ best album, is this psychedelic cumbia masterpiece that gets even better with time.

4 - “La Negra Tomasa” (Caifanes, Mexico)
Released in 1988, this rock cover of a traditional Cuban cumbia caused a revolution: it told Mexican rockers it was OK to listen to your parents’ music and spearheaded the rebirth of Mexican rock.

5 - “Chúntaro Style” (El Gran Silencio, Mexico)
Here’s the high point in the cannon of Monterrey’s El Gran Silencio, one of the best live bands I’ve ever seen. It was supposedly written as an homage to an existing style, but the song actually re-invented it.

6 - “Encadenada a Mí”(Los Bukis, Mexico)
If this song doesn’t convince you that Marco Antonio Solís is one of the three greatest living composers in Mexico, nothing will.

7 - “Cumbia Poder” (Celso Piña y su Ronda Bogotá feat. El Gran Silencio, Mexico)
Bogotá my ass. Celso Piña is all Monterrey, and this is arguably the best of many collaborations he did with rockeros.

9 - “Techno Cumbia” (Selena, U.S.A.)
The cumbia is there, but semi-hidden by a mix of reggae and dancehall. Arguably Selena’s most experimental and unTejano track.

10 – “Padre Nuestro” (Los Fabulosos Cadillacs, Argentina)
I wish cumbia villera dudes paid more attention to this one to see how it’s done. I know LFC would disagree with me, but I don’t care. It has the same delayed, dragged beat typical of cumbia villera, but the poetry (a desperate love song to God) stays away from clichés and the playing is spot-on.