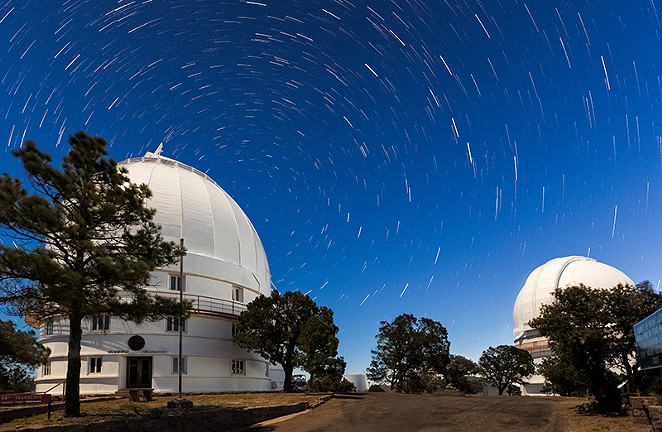 You've finally made it to college, and your parents are walking out of your dorm room when you feel it — freedom. One way to make the most out of it? The tried-and-true college road trip. Whether you were born and raised in the Lone Star State or just moved here, odds are you have a lot to discover. Between hiking in canyons, savoring a corn dog at the State Fair of Texas or spending questionable evenings strolling up and down Austin's 6th street, Texas has something for everyone.

Any Texan knows that the stars here are big and bright, but to really witness it, head out to the McDonald Observatory in Fort Davis. Owned and operated by the University of Texas, the observatory is home to a number of large research telescopes. If you make it to the Observatory on Friday or Saturday night, you can get a professional tour of the night sky at a Star Party.

While traveling through the barren deserts of West Texas, a stop in Marfa will be just what you need to break up the monotony. As a mecca for artists and oddballs alike, the desert town challenges Austin's title as "Weird City." A must-see for art aficionados, the 340-acre Chinati Foundation is a maze of unique installations. Founded by Donald Judd in 1979, it was intended to be an escape from New York's mainstream art scene. Since then, it's been a safe haven for unusual pieces ranging from an abandoned Soviet schoolhouse to Judd's own concrete boxes. Though it's not possible to enter the store, the permanent installation Prada Marfa (about 30 minutes away in the tiny town of Valentine) is another Instagram-worthy destination for art lovers to visit. After a day of trying to make sense of Marfa's art scene, you can wind down at El Cosmico, a fashionable campground dotted with tepees and vintage trailers.

For some of the most expansive views of Texas, take a hike through Big Bend National Park. The park covers more than 800,000 acres of the Chihuahuan Desert and is home to mountains, canyons and rivers. Because of the park's many features, visitors can take river trips, hike over hills and valleys and bike through the mountains. Take a day trip along the river to see Santa Elena Canyon, which features 1,500-foot-tall cliffs and some of the most breathtaking views the park has to offer. As the desert nights begin to get cooler, visit Langford Hot Springs. Situated alongside the Rio Grande, the geothermal springs are 105 degrees year-round.

Even though it feels like Lubbock is in the middle of nowhere, the college town knows how to keep things interesting. For rock 'n' roll enthusiasts, visiting the Buddy Holly Center is a requirement. Visitors can see Holly's guitar straps, his personal collection of records and other paraphernalia in order to learn more about the musician and the influence he's had on the music industry. Another great throwback is Lubbock's Stars and Stripes Drive-in. Named one of the top five drive-ins in the U.S., the three-screen theater makes for a simple and fun outing with friends. If you're looking for something wilder then head to the city's Depot district for music and dancing.

The second largest canyon in the country, Palo Duro is known as the "Grand Canyon of Texas." Located near Amarillo, the canyon is about 800 feet deep and 120 miles long. Not to perpetuate the idea that Texans ride their horses everywhere, but a horseback ride through the canyon can be an unforgettable experience.  A few stables in the area offer rides through the canyon, offering a unique vantage point as you observe its springs, caves and Spanish Skirts. Another offbeat way to explore the canyon? Palo Duro's ZipLine Adventure Park. One of the most affordable zipline sites in Texas, the park offers a bird's-eye view of the canyon.

Even if you've been frequenting the state's many pools, lakes and rivers your whole life, a dip in the water is always a good idea in the warmer months. About 20 miles west of Austin lies the Hamilton Pool Preserve, a natural pool and grotto. A popular swimming spot, the pool's turquoise waters also feature a 45-foot waterfall. For the more adventurous, Jacob's Well is located less than 20 miles northwest of San Marcos. The artesian spring descends about 30 feet before a complex cave system continues for another 90 feet. Jump from the surrounding limestone cliff and it looks like you've jumped into an abyss. A staple for any Texan, newfound or otherwise, is tubing. A lazy ride down the Guadalupe, Comal or San Marcos River with friends is a must-have college experience.

With a different festival going on seemingly every weekend, there's no such thing as a quiet night in Austin. While passes to ACL and SXSW may be out of the question for many college students, the Live Music Capital is extremely accessible even if you're broke. Year-round shows at Stubb's or Emo's and free SXSW day parties let you explore the city while listening to great bands. If music festivals aren't your thing, Austin is also home to craft fairs, food festivals and unique celebrations such as Bat Fest and Eeyore's Birthday. For those looking to get away from the commotion, Austin also offers a variety of outdoor activities. You can paddle board across serene Lady Bird Lake, wake yourself up with a dip in 68-degree Barton Springs or hike through Mount Bonnell.

With a record-breaking number of attendees, you'll feel left out if you don't experience Houston's Livestock Show and Rodeo. While the rodeo is the world's largest livestock exhibition, it also books some of the world's largest artists such as Bob Dylan, Bruno Mars and Taylor Swift. Actually worth watching given this season's ride, now you have an excuse to cheer for the Astros at Minute Maid Park. Spend the day pretending you know what you're yelling about and stuff your face with cotton candy. If you're more interested in history, art or science then head to Houston's Museum District. The 20 museums and galleries cover a wide variety of subjects, from the Holocaust Museum to The Museum of Fine Arts.

One surefire way to gain the freshman 15? Attend the State Fair of Texas. Held from late September to mid-October, the annual state fair is one of America's largest, and it's definitely worth the trip. A myriad of fried foods, the biggest ferris wheel in the country and a 55-foot-tall cowboy should be reason enough for you to round your friends up and head to Dallas for the weekend. Another nearby record breaker is Billy Bob's. The Fort Worth Honky Tonk is billed as the world's largest and is a great place to dance or witness professional bull riders in their arena. While in Dallas, history buffs and conspiracy theorists should stop by the Sixth Floor Museum. Artifacts and films take visitors through JFK's life, legacy and assassination.

When you and your friends inevitably get together and decide to take a trip to the beach, you have two options: Take a relaxing trip where you're free to soak up the sun or head to a party beach where, by the end of the week, the sight of a beer bong will make you want to throw up. If you choose the first option, then drive down to Rockport or Matagorda Bay. Both of these offer quieter beaches less crowded with tourists, giving you more freedom to lie out and enjoy the water. Now, forget everything I just said about relaxation because, like football games and final exams, a crazy trip to South Padre is just a necessary part of college life. These white sandy beaches attract their fair share of party-goers year-round and rather than worry or resist, just give into the madness and have fun on the party island.