The San Antonio Film Festival kicks off with two free screenings for Military Night. Kings of BBQ: Barbecue Kuwait is a documentary short that follows five high-power pitmasters as they travel to Kuwait with 2,300 pounds brisket and more to serve up home-cooked Southern BBQ to 5,000 troops stationed in Kuwait (read more). Gold Star Children is a feature documentary that takes an intimate look at American children who’ve lost a parent to war. By following the parallel journey of two generations, children who lost their parent in Iraq and now-adult children who lost theirs in Vietnam, the film explores the resilience of children and the burden they carry from U.S. wars. Free, 6:00 pm Monday, City Base Cinema, safilm.com.

The Michaels store in Alamo Heights will be holding an art class on designing your own jewelry by using various methods like knotting, crimping and wire looping. Participants’ supplies will not be included. Free, 6-8pm Tuesday, 225 E Basse, (210) 804-1966, michaels.com.

Movies by Moonlight will be wrapping up its summer series at Travis Park with Universal Pictures’ 2013 animated comedy Despicable Me 2, featuring the voices of Steve Carell and Russell Brand. The sequel revisits the super villain Gru, his adopted daughters and the infamous minions as they are faced with a new criminal mastermind. Free, 8:30pm Tuesday, 301 E Travis, (210) 207-3914, sanantonio.gov/parksandrec.

Bottled Up: The Battle Over Dublin Dr Pepper 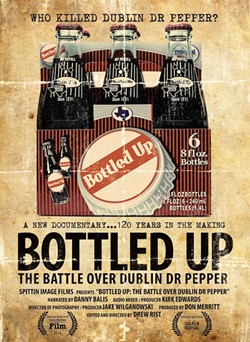 Mexican Coke has long been gaining notoriety because it has pure cane sugar. And once upon a time, Dr. Pepper did, too. Bottled Up: The Battle Over Dublin Dr Pepper, a feature documentary, tells the saga of the small town of Dublin, Texas, which was the first place to ever bottle the soft drink Dr Pepper back in 1891. The soda earned cult-like status in the '70s by continuing to produce Dr Pepper with pure cane sugar as the soda industry switched to High Fructose Corn Syrup (HFCS). Bottled Up details the events and history leading up to the demise of the relationship between Dublin Dr Pepper and its parent corporation, The Dr Pepper Snapple Group, in 2012. Long live pure cane sugar! Free, Doors open at 6:00 pm Tuesday, City Base Cinema, safilm.com.

The Twig Book Shop and Gemini Ink will hold a special reading event featuring novelist Diana Lopez, as she discusses her last three novels and reads from her latest work for young adults, Ask My Mood Ring How I Feel. Lopez’s novel addresses a young girl named Erica “Chia,” while using a mood ring to help determine her changing mood as she transitions to the 8th grade. Free, 6:30pm Friday, 306 Pearl Pkwy, (210) 826-6411, geminiink.org.

In partnership with the San Antonio AIDS Foundation’s “Bid and Brunch” event, DanceArt San Antonio will be offering free workshops focusing on triple-time swing and rumba. Guests are encouraged to bring their own dance partners but if you don’t have a partner don’t fret; give them a call and they will find one for you. Free, 8-10pm Friday, 434 N Loop 1604 W Ste 2202,(210) 334-8777, danceartsa.com.

Chandra Murthy will be holding a seminar for high-school students and parents on college applications and financial aid hosted by Café College. Experts will be available to answer any questions that students or parents may have as many topics like standardized tests, interviews and scholarships will discussed in preparation for attending college. Free, 2-4pm Saturday, 131 El Paso, (210) 207-4528, cafecollege.org.