Ernest Greene, who creates under the mightily apt moniker Washed Out, rose to indie stardom in 2009 with the release of two fantastic EPs of hypnagogic electronic music. Something akin to dance music on a gigantic dose of Xanax, his style, which involved sampling and electronic composition, resonated as a part of a larger micro-genre surge known as chillwave. Greene’s subsequent releases have found him expanding on the blueprint he created, adding more live instrumentation and tighter song structures. Thursday, however, you can catch the man getting back to his roots as he performs a full DJ set. Free, 10pm, Brass Monkey, 2702 N. St. Mary's, 480-4722 — James Courtney

“@BradPaisley I don’t know your music cuz I don’t drive a pickup and I don’t sleep with my sister,” said an odious twitterer on Jimmy Kimmel’s Mean Tweets series. It’s a common criticism of the singer, and not without merit. If you had the time to index Paisley’s lyrics, the words “truck,” “beer” and “summer” would pop up with alarming consistency. But the West Virginia native has a much larger lyrical reach than a Mean Tweet would suggest. On “Whiskey Lullaby,” Paisley and Alison Krauss take on alcoholism and death in a quiet setting, becoming one of Paisley’s four platinum singles in his 16-year-career. $10-$35, 7pm, AT&T Center, 723 AT&T Center, (210) 444-5000  —Matt Stieb

Excellent young rappers are a dime a dozen in Chicago — Saba Pivot, Chance the Rapper, Chief Keef, Vic Mensa, No Game Gypsy. It’s an endless competition, really, that leaves little breathing room for the newcomers. But twenty-something rapper Mick Jenkins, a product of Chicago’s recent creative renaissance and poetry scene, has managed to hoist himself above the local buzz. His debut mixtape, 2013’s Trees and Truth, left him penning free verse; it was loose, indistinct and poetically oblique. Boasting with acid-jazz production and biblical skits of Adam and Eve made the mixtape a favorite amongst local hip-hop savants.

However, it wasn't until his recent The Water[s] that set him apart from Chicago’s saturated hip-hop scene. Where his first mixtape was jazzy in a general-sense, lazy guitar noodles and airy chords wash the new album with watercolor blues that sand out the rough edges of the heavy material. And it’s all in the voice. Mick Jenkin’s delivers in an introspective masculine voice that Chicago hasn't seen in a while. Chance, the Rapper is the manic schizophrenic, Chief Keef is the to-the-streets loose cannon while Vic Mensa is the carefree party-boy. Mick Jenkins is serious, and his shows are too. With Kirk Knight, Saba Pivot, No Name Gypsy. $12, 8:30pm, Alamo City Music Hall, 1305 E. Houston —Alejandra Ramirez

There are one-man bands, and there is Shakey Graves. The Austin-based bluesman (born Alejandro Rose-García) is the complete package: subtle, tasteful fingerpicking, solid percussion using both feet, a whisky-soaked voice, amazing stage presence and two albums (2011’s Roll the Bones and 2012’s Donor Blues EP, containing 2009 home recordings) with enough good songs to prove he’s a lot more than just a novelty act. His performance at 2013’s South by Southwest was one of the festivals’ most buzzed about events with even The New York Times’ socks being knocked off. His reputation as a live act is so strong that the dude even has his own official Austin holiday (February 9). Sold Out, 8pm, Gruene Hall, 1281 Gruene, (830) 606-1281

Denton’s Terminator 2 packs the power of the T-1000 into sludgy doom metal. On the 2014 EP Grueling and Worthless, the trio provides slow-nodding riffs and overblown noise. With ungodly guitar groans and a punishingly loud rhythm section, Crawl explores the ideas of failure and decay. With Driven by With Among Light, Life Decay. $4, 9pm, The Ten Eleven, 1011 Avenue B, (210) 320-9080 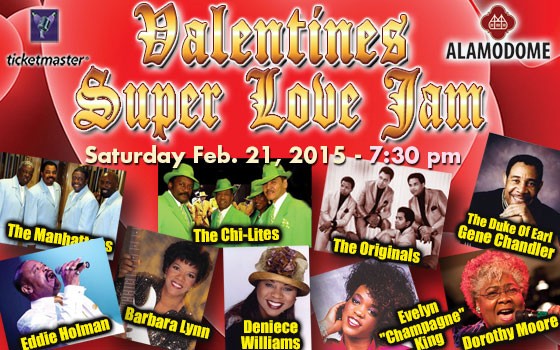 Though they’re a week late on the Valentines angle, this satin-smooth revue has enough soul to keep the amorous holiday going, or to provide bad lovers an opportunity to make up for an underwhelming V-Day. Featuring The Chi-Lites, Evelyn “Champagne King,” The Manhattans, The Originals, The Duke of Earl Gene Chandler and more, it’s a retrospective of ’60s soul artists who wore matching gear and lined up like schoolchildren behind a leader with powerhouse vocals. $28.50 - $38.50, 7:30pm,  Alamodome, 100 Montana, 207-3663 —Matt Stieb

Échale! Finally, the rodeo is getting away from the country backbone of their musical programming and into some real deal banda. From Mazatlán in Sinaloa, Mexico, the brass-based Banda Los Recoditos combines the traditional banda style with clear-cut pop melodies, leading to wild international success — the video for the 2013 single “Mi Último Deseo” has a staggering 106 million views on YouTube. 7:30pm, AT&T Center, 723 AT&T Center, 444-5000 —Matt Stieb

With a voice cultivated in a gospel choir, Detroit native Diana Ross joined the Motown family as a teen with her iconic girl group The Supremes. After nearly a decade with the trio, Ross went solo in 1969 and found chart-topping success, dabbling in disco, soul and R&B while collaborating with the likes of Ashford & Simpson, Michael Jackson and Lionel Ritchie. Although her latest efforts have been better received overseas, Ross remains a hot ticket stateside, evidenced by her upcoming Vegas run at The Venetian Theatre and her career-spanning In the Name of Love Tour, which lands at the Majestic on Monday. $51-$126, 8pm, The Majestic Theatre, 224 E. Houston, 226-5700 —Bryan Rindfuss


Learn how to put a song on itunes at ReverbNation.com