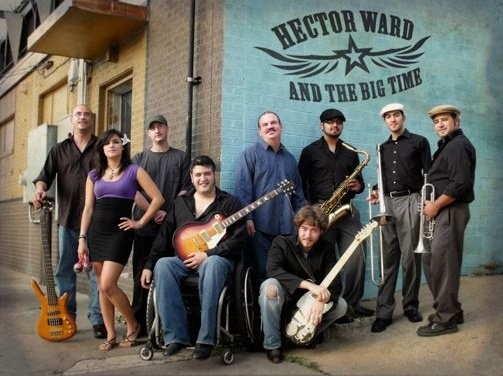 Detroit proto-punk trio Death’s album ...For the Whole World to See was something of a stalled prophecy. In 1974, in the studio at Columbia, the African-American Hackney brothers were denied a deal by studio prez Clive Davis for refusing to change their name (despite having one of the greatest band names of all time). The tunes sat in the can until Drag City released them in 2009. It was a revelation. Death’s immense speed and unflinching tone put them years ahead of the punk explosion, with more energy or attitude than many of the genre greats. As the 2012 doc A Band Called Death states on the poster: “Before there was punk, there was Death.” $18, 8pm, Paper Tiger, 2410 N. St Mary's St.

Born in Brooklyn, guitarist Paul Oscher is known for his work with Chicago blues god Muddy Waters (that, or his marriage to Pulitzer-winning playwright Suzan Lori-Parks). From 1967 to 1972, Oscher toured with The Hoochie Coochie Man, developing a style versed in Delta blues and rock ‘n’ roll. In the slow Delta style, Oscher is a bad motherfucker — accordion rig on his shoulders, sunglasses on, blowing the blues away. $10, 8pm, Luna,  6740 San Pedro Ave, (210) 804-2433

On Bullets for Breakfast, Royal Punisher is a brawling crew of rock ‘n’ roll dudes bringing a leather jacket energy to jazz (or, reviving the bad boy attitude of the bop musicians, but with less heroin). An acolyte of Ornette Coleman, saxophonist Steve Esteban flies above the band, releasing hawkish, piercing bursts of alto. On guitar, Don Robin pops in with unexpected chordal jabs, opening up with mean bursts of Santanan guitar in the solo sections. 9pm, La Botanica, 2911 N. St. Mary's St.

With The Ramones and Reagan Youth as alumni, Forest Hills High School in Queens is, by default, the Rock ‘n’ Roll High School. In 1980, shortly after Joey and Johnny passed through the halls, Dave Rubinstein and Paul Bakija met up and formed Reagan Youth. While Reagan Youth maintained the sloppy speeds of their forebearers, the anarcho-punks took a heavy political spin on tunes like “New Aryans,” “I Hate Hate” and “In Dog We Trust.” With Sober Daze. $8- $10, 8pm, The Korova, 107 E. Martin St., (210) 226-5070

In a [email protected] musical takeover, Do210 presents a trill trio of acts that loosen and expand upon Latin American sonic tradition. Repping San Anto, headliner Piñata Protest, no doubt familiar to our readers, has rightly gained national traction over the past few years with its breakneck and boisterous blend of punk and tejano. Also on the bill are SA’s Grupo Frackaso and ATX’s Money Chicha, offering up, respectively, a visceral, thrash-infused brand of cumbia and heady, danceable psychedelic cumbia. La Botánica will provide vegan eats and Miller Lite’s bringing the booze. Free with RSVP, 8pm, Guadalupe Theater, 1301 Guadalupe St., (210) 271-3151

At the front of Chicana punk outfit FEA, Letty Martinez weaves in and out of Spanish over the torrid band. In the rhythm section, Jenn Alva, Phanie Diaz (both of Girl in a Coma) and Aaron Magana provide FEA’s driving tone. $5, 9pm, Limelight, N. St. Mary's St., (210) 735-7775

Performing since the age of six, Eva Ybarra boasts a lengthy career peppered with record deals, dancehall gigs and festival appearances. Celebrated earlier this year in Joel Settles’ multimedia production La Reina del Acordeón, Ybarra taught herself the accordion by listening to the radio, fought for her place in a male-dominated genre and now describes the original songs she writes as “progressive conjunto.” A rare opportunity to experience the local treasure in an intimate setting, Hi-Tones’ fourth anniversary party brings Ybarra to the stage with support from honky tonk ‘n’ roller (and Current contributor) D.T. Buffkin. $5, 9pm, Hi-Tones, 621 E. Dewey Pl., (210) 785-8777

San Anto old-schoolers Big Drag are sort of a lost chapter in the city’s rock ‘n’ roll history. The Taco Land heavyweights put out a strong, self-titled record in 1995, their only full length to come to light. Back in gigging action, the trio certainly fits into the garage rock chapter currently being written in SA. With Sons of Hercules, Snowbyrd. $5, 9pm, Paper Tiger, 2410 N. St. Mary's St.