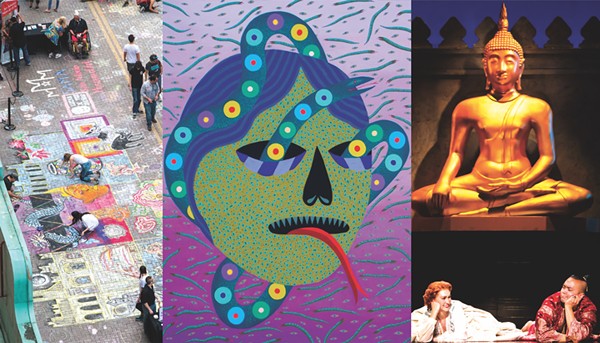 Thu 10/12-Sat 10/14
Forbidden Broadway
Since its premiere in 1982, Forbidden Broadway has enjoyed a multitude of productions up to the present day thanks to writer Gerard Alessandrini, who updates the revue to include each new batch of Broadway’s hits, ensuring
that no show is safe, no matter how recent its appearance on the Great
White Way. Styled as a cabaret, the production spoofs Wicked, Pippin, The Book of Mormon, Les Miz and many more, as well as familiar faces from the Broadway scene via spot-on cast impressions. Longtime fans of musical theater
will find plenty to love, as the revue’s roasts amply reward those with an encyclopedic knowledge of the oeuvres of Sondheim, Schwartz and Larson.
$39.50, 7:30pm Thu, 8pm Fri, 2pm & 8pm Sat, Tobin Center for the Performing Arts, 100 Auditorium Circle, (210) 223-8624, tobincenter.org. — Kelly Merka Nelson