Never lost in the deep sea of Fiesta events, Cornyation is more than a seasonal favorite — it’s a hyper-local rite of passage that packs a lasting punch not unlike a midnight screening of The Rocky Horror Picture Show (experience it at least once or you’ll inevitably be left out of conversations for the rest of your life). Since its launch as a straight-up spoof of the exclusive Coronation of the Queen of the Order of the Alamo, Cornyation has seen wild ups and downs — morphing with changing times, broadening its focus (from high society to politics and beyond) and eventually establishing itself as a major fundraiser for HIV/AIDS charities. Inheriting a title inaugurated in 1951, James Lawnmower Sales and Service proprietor Jeffrey James steps into the royal role of King Anchovy LII to rule over the Court of Insane Privilege during three nights of outrageous lampoonery. $15-$40, 7pm & 10pm Thu, Charline McCombs Empire Theatre, 224 E. Houston St., (210) 226-3333, majesticempire.com. — BR

Beethoven Maennerchor turns a spry 150 with its mission of preserving the German language and culture with another bash. Pack the dirndl and lederhosen, grab your favorite stein and join the festivities. With polka, German choirs, pitchers of Spaten, bratwurst, potato pancakes and more. $3-$5 (free for kids 12 and under), 5pm-midnight Thu-Fri, Beethoven Halle und Garten, 422 Pereida St., (210) 222-1521, beethovenmaennerchor.com. — Jessica Elizarraras 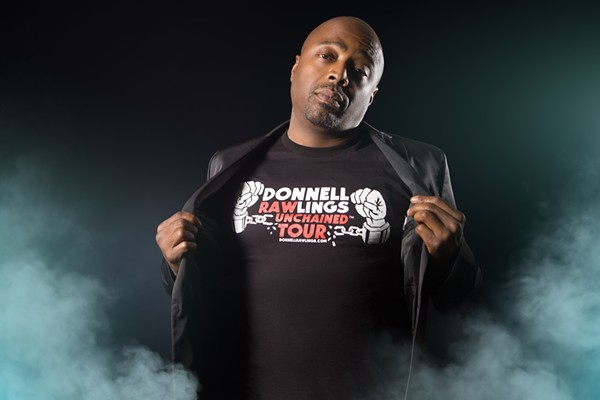 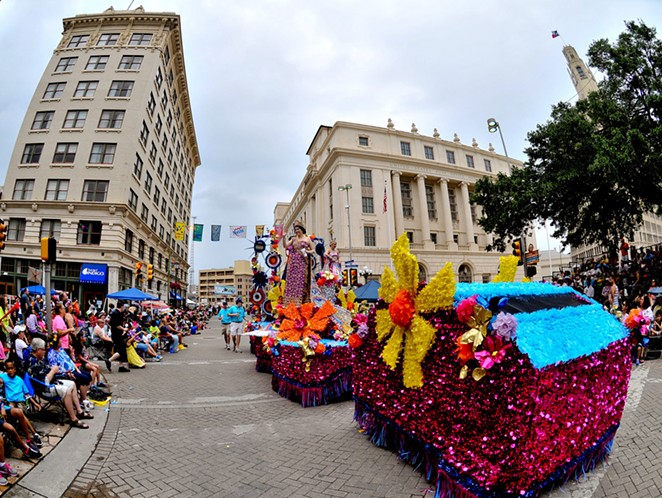 At the very center of the 10-day celebration, Fiesta’s parades run the gamut from traditional reverence to whimsical and wacky. If you can only attend one, most would point you toward the Battle of Flowers Parade, the over-the-top procession that sparked Fiesta itself back in 1891. Produced entirely by women and designed to honor the heroes of the Alamo, the beloved tradition brings together all the hallmarks of Fiesta for a procession through downtown featuring elaborately decorated floats, decked-out royalty, ROTC units, local celebs and marching bands. Fiesta fanatics, however, will tell you to attend as many as possible — including the wildly illuminated Fiesta Flambeau Parade, the dog-centric Fiesta Pooch Parade and the wonderfully wacky King William Fair Parade (all on April 29). $15-$30, 11:30am Fri, visit battleofflowers.org for the parade route. — BR

Founded in 2001 by photographer Selena Mooney, Suicide Girls began as an alternative online forum of models and photographers. The name, originating from a line in Chuck Palahniuk’s 1999 novel Survivor (“It’s the same with all these suicide girls calling me up”) represents women who commit “social suicide” — rebelling against society’s aesthetic and character norms. The company vision includes enabling women to govern their own sexuality, while incorporating their modern interests and aspects of their personality. Choreographed by Manwe Sauls-Addison, the Blackheart Burlesque dance experience showcases a rotating cast of tattooed and pierced women in sexy cosplay inspired by the likes of Star Wars, Harry Potter, Game of Thrones and Marvel superheroes. The funky-flesh phenomenon is filled with garters, pasties and various stage props. Hosted by Sunny and Katherine Suicide, the sensual show is a titillating thrill for the alternative community and anyone wanting to broaden their views on beauty and sexuality. $25-$125, 8pm Fri, Alamo City Music Hall, 1305 E. Houston St., alamocitymusichall.com.
— Kimberly Rivera

The 1980s were a spectacular time for the music industry. Technical innovations were introduced which greatly impacted the sound, deliverance and genres of music. The synthesizer generated entirely new sub-genres and altered existing ones forever. The advent of MTV caused a spike in music video production. Among the icons who arose was one fearless female with a trained mezzo-soprano voice who cultivated a tremendous following of loyal rock-and-roll fans. Pat Benatar came to true celebrity in the early ’80s, with beautiful ballads and rebellious rock hits like “We Belong,” “Hit Me With Your Best Shot” and “Invincible.” Her legendary vocals demanded equality in a genre dominated by men, empowering audiences around the globe – especially young women. With a reputation that includes four consecutive Grammy awards (and nine nominations) in the Best Female Rock Performance category, the rebel (with a cause) ingrained herself in rock-and-roll history. Pat Benatar, along with her husband and long-time musical partner Neil Giraldo, tours annually every summer. As a musician, producer and writer, Giraldo has an equally impeccable reputation in the music industry with a vast catalogue of solo hits and collabs. Together, they took the rock scene by force and even became the first female and first guitarist to be featured on MTV. After three decades, the celebrity couple is still selling out auditoriums around the world. $35-$100, 8pm Fri, Tobin Center For the Performing Arts, 100 Auditorium Circle, (210) 223-8624, tobincenter.org. – KR

King William Fair began in 1968 as a small and quirky celebration of the eclectic neighborhood that lends the fair its name. The Fiesta San Antonio favorite now attracts tens of thousands of revelers from all over each year. Aside form being a damn good time, the fair, like most Fiesta events serves a good cause. King William Fair is the main fundraiser of the King William Association, which seeks to “preserve and protect the oldest historic district in Texas and promote the unique cultural heritage of San Antonio.” This year’s King William Fair Parade, which kicks of the party, is themed “Kids in the Hood,” and will feature students from neighborhood schools as grand marshals. As always, a slew of artists and artisans (over 200 actually) will be showing/selling their work, which ranges from ceramics and pottery to children’s (and adults’) clothing, from drawings and paintings to glass items, from textile pieces to jewelry, and even more. On the entertainment side of things, the 2017 King William Fair boasts a swell and diverse lineup of talent (on four stages), including nuevo orquesta Latina Volcán, Latin jazz outfit Henry Brun Quartet, puro San Anto garage rock crew Los #3 Dinners, Texas punk country tribe Two Tons of Steel, Mexican folk songstress Azul Barrientos, just to name a few. There will also be assorted street performers and a stage dedicated to song and dance for kiddos. $10, 9am-6pm Sat, King William Historic District, (210) 271-3247, kwfair.org. — James Courtney

Housed in the Alkek Library at Texas State University, the Wittliff Collections are dedicated to “collecting and preserving the creative legacy of Texas, the Southwest and Mexico.” Focused on photography and literary arts, the collection acquired the archive of internationally revered author, MacArthur “Genius” Grant recipient and former San Antonio resident Sandra Cisneros in 2015. Assembled from more than 300 boxes filled with photographs, videos, awards, interviews, drawings and journals revealing early versions of her cherished stories and poems, The Cisneros Papers comes to light through the exhibition “Sandra Cisneros: A House of Her Own” (free, on view through July 1); a daylong symposium featuring panels with Chicanx scholars and artists including Laurie Ann Guerrero, Norma Alarcón and Sonia Saldívar-Hull (free, 10am-5pm Sat) and a reading from Cisneros followed by a discussion between the author and John Phillip Santos (free, 2pm Sun, RSVP requested by emailing [email protected]). Cisneros fans unable to make the drive to San Marcos can celebrate the occasion closer to home with “An Archive of Her Own,” which combines poetry readings from Xicana writers Claudia Cardona, Bonnie Cisneros, Marilyse Figueroa and Leticia Urieta with an art market curated by Christina Martinez of VeryThat, music courtesy of DJ Electric Messiah and “Cisneros-themed drink specials including a House On Mango-rita” (free, donations benefit Hays County Women’s Center, 8-9:30pm Sat, La Botánica, 2911 N. St. Mary’s St.). Texas State University, The Wittliff Collections, Alkek Library, 601 University Drive, (512) 245-2313, thewittliffcollections.txstate.edu. — BR

To the delight of many who’ve been craving a drag fix but can’t get away with the whole late-night experience, drag brunches have become a thing in San Antonio. While nightlife promoter/drag enthusiast Rey Lopez regularly takes over the Amp Room with Sunday Funday extravaganzas catered by La Parroquia Mexicana, Paramour has also proven itself as an unlikely drag destination with such amusing themes as “An Ode to Beyoncé” and “Madonna vs. Britney.” Rising to the occasion of Fiesta, the rooftop bar bows down to the Queen of Tejano with “Viva! Selena!” In addition to performance by local showgirls Kristi Waters, Nilaya Mathews and Jorgeous Waters — not to mention breakfast tacos and “specialty Selena- and Fiesta- themed cocktails” available for purchase — the free event showcases the talents of Corpus Christi-based Selena impersonator Honey Andrews. A native of Mexico who moved to Corpus just before Selena’s murder, Andrews came of age idolizing the late icon and now takes her act to heart, going so far as to recreate a number of her most memorable outfits (including the spotted cowhide jacket and famous purple jumpsuit). Beyond national attention, Andrews routinely touches Selena fans so deeply they get “flashbacks.” “Sometimes, if I’m wearing the exact costume they saw her perform in, they’ll say, ‘I saw her perform in this, I was this old, I took pictures’ … I love hearing stuff like that. Hearing their stories makes me feel more connected to her,” Andrews told Cosmopolitan in 2015. Promising an authentic treat for local Selena fans, one of Andrews’ favorite songs to perform is the timeless “Como la Flor.” Free, 11am-4pm Sun, Paramour, 109 9th St., (210) 307-8740, paramourbar.com. — BR