“Alternating Currents: A Conversation About Beauty” 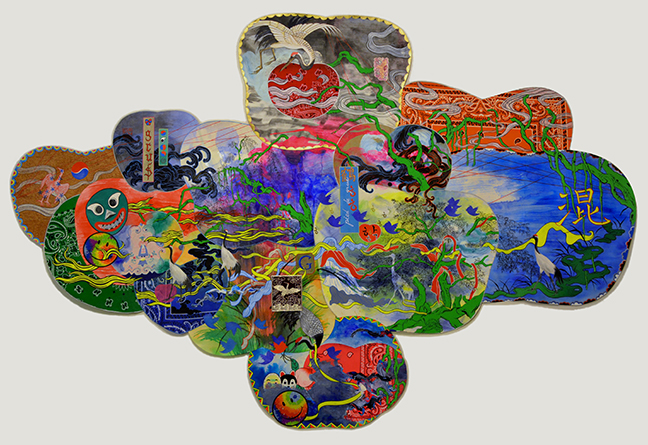 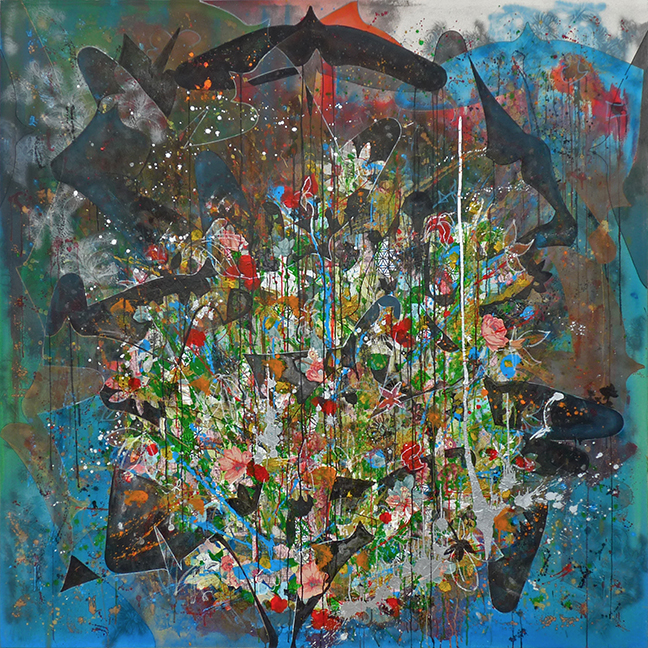 Fausto Fernandez, Love is what you make it out to be, 2013. Collage, architectural plans, maps, acrylic, oil pastel, and spray paint on canvas, 72 x 72 in. Courtesy of the artist. 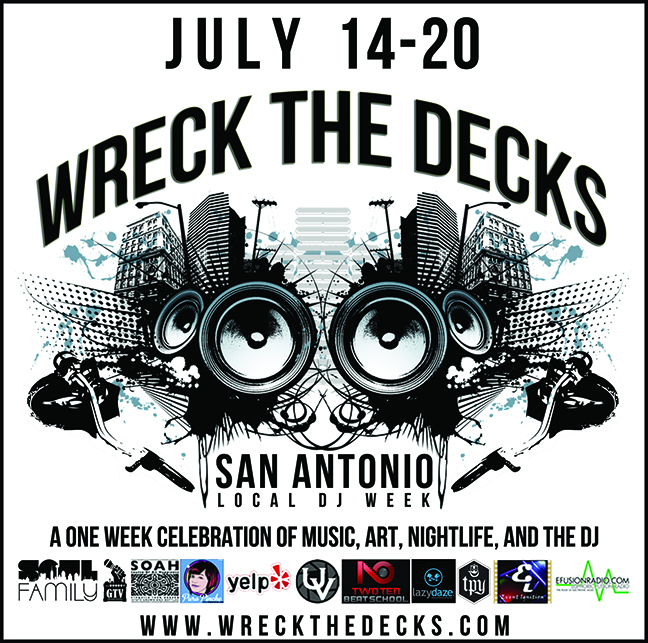 Presented by the Soul Family and GTV Promotions, Wreck the Decks is a weeklong celebration of SA’s underground music scene and the DJs who make it happen. Leave it to Southtown 101 (101 Pereida) to kickstart the weekend with ‘80s jams by DJs JustAngel and Agosto Cuellar (10 p.m.-2 a.m. Thursday). Friday night's "Love Is the Message" doubles as the three-year anniversary of JJ Lopez and Leonard Trujillo’s Soul Spot party at Tucker’s (10 p.m.-2 a.m. at 1338 E Houston). Saturday serves up Beats & Eats with food truck fare and sets by Carlos Panama, Dorian Perez, DeanoMyte and co. at The Block SA (4-8 p.m. at 14530 Roadrunner Way), followed by Flux—a progressive dance party featuring Rad Envelope, Creep$ide and Wildernest at Bottom Bracket Social Club (9 p.m.-2 a.m. at 1603 N Colorado). Wrapping things up with a splash, Sunday’s all-ages Re/Groove Pool Party at Aloft Hotel (2-8 p.m. at 838 NW Loop 410) packs a deep-house punch with sets by Maz Chingon, Enrique Cortazar, Saleem Razvi, Abe Novy and Josh Granado—not to mention brews, bikinis and bros. All Wreck the Decks parties are free for 21 and up; for details, visit wreckthedecks.com. —BR 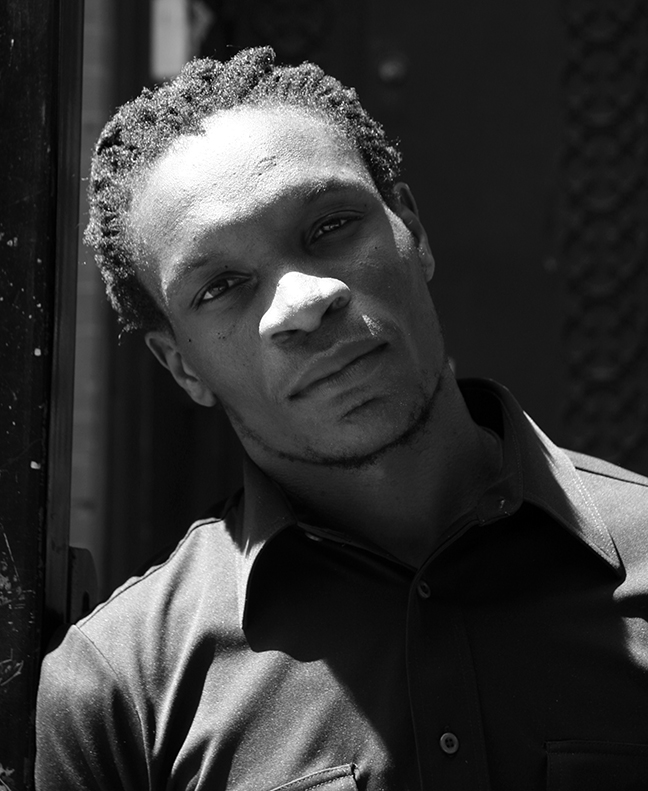 New York-based Jamaican poet and English professor Ishion Hutchinson will be reading from his latest collection, Far Places, in conjunction with Gemini Ink’s SouthWord Writing Festival. Brought to life with his deep and lyrical voice, Hutchinson’s verse illustrates uncommon landscapes of a liminal nature and intense imagery influenced by his past and present. Hutchinson’s impressive list of credits includes a 2011 PEN/Joyce Osterweil Award (for the collection Far District: Poems), a Whiting Writers’ Award and the Larry Levis Prize from the Academy of American Poets. Free, 6:30-8pm Friday, Michael and Naomi Neidorff Gallery, Trinity University, One Trinity, geminiink.org. —Laura Carter 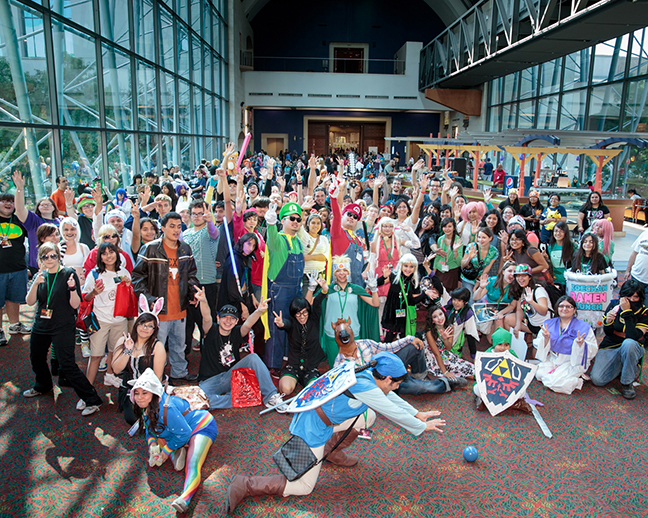 Ask San Japan community relations director David Ramirez how the local Japanese animation convention has changed over the last seven years, and the answer ultimately comes down to size.

“We’re still trying to wrap our minds around how much it has grown since year one when we had a little over 1,000 people,” said Ramirez, who expects between 13,000 to 14,000 attendees this year. “We’ve gotten so big so fast.”

“San Japan allows for people with similar interests to meet,” said local cosplayer Yasmin Khan, who manages promotions for Kaede Con, the anime convention at St. Mary’s University. “It’s a very welcoming environment for everyone. Even people who have never seen an episode of an anime are capable of having fun at this convention.”

San Japan returns to the Henry B. Gonzalez Convention Center for its third straight year after outgrowing venues like the Tropicana Hotel and the former Municipal Auditorium. Although not as sizeable as longer-running North American anime conventions like the Anime Expo in Los Angeles (61,000 attendees in 2013) or A-Kon in Dallas (22,000 attendees in 2013), San Japan is holding its own and pleased with its standing when compared to those with deeper histories.

“It is incredibly validating

particularly when the list of the largest conventions is populated by those that have been operating for more than a decade [longer] than we have,” said Ramirez.

San Japan: Samurai 7 attendees can pre-register online (adults only) or buy a one-day pass at the convention. Below, the Current highlights some of the geek-centric events taking place this year.

Whether you decide to go mainstream and wear Spider-Man tights or a sexy Xena-inspired bustier, or don such an obscure costume even your nerdiest friends won’t get the reference (Are you Skyguard Katie from World of Warcraft?), there’s room for all types of fashion at the cosplay events at San Japan. “It’s great to see 10,000 geeks and nerds running around the River Walk in costumes,” Ramirez said. In-person and online registration for the Cosplay Show starts Friday at 9 a.m. There is also a cosplay contest for attendees only interested in live-action-based costumes (sorry Princess Bubblegum).

If it’s been a lifelong dream of yours to stand in front of thousands of anime lovers and belt out your rendition of Ayumi Hamasaki’s chart-topping single “Rule/Sparkle,” San Japan gives you that opportunity during this amateur-only, karaoke-style singing competition. Along with vocal ability and how well participants memorized the lyrics (preferably in Japanese or English), judges will also be scoring singers on stage presence and appearance. So put on those oversized bows, frilly skirts and knee-high socks and rock out.

There is a little extra charge ($8) to enter the Maid Café, but this specialized restaurant popular in Japan is perfect for hungry patrons who want light refreshments served to them by attractive waitresses dressed in French maid attire. Although it may sound a bit risqué for a family-friendly convention, Maid Cafés are non-sexual, as is San Japan’s Lolita Tea Party, which has nothing to do with Vladimir Nobokov’s 1955 novel Lolita or Stanley Kubrick’s 1962 film. Instead, it describes another Japanese subculture based on Victorian-era clothing. Now that you’ve learned something, here’s the bad news: tickets for the Lolita Tea Party are sold out, so go flirt with a vending machine or something.

Entry into the masked ball formal event on July 18 at 8 p.m. comes with some serious dress code rules for anime fanboys and girls, which include a required mask (leave your Guy Fawkes masks at home, anarchists) and a laundry list of other acceptable attire (review it at san-japan.com and avoid the embarrassment of getting turned away at the door because you decided to wear Hello Kitty flip-flops). So, if you’ve always wanted to see your friend who only wears Dragon Ball Z T-shirts in a coat and tie slow dancing with a girl that shares his interest in TitanFall, drop that X-Box One control and make a night of it.

Those that live in the fantasy realm will recognize many of the voice actors, fashionistas, YouTube personalities, musicians, artists and stand-up comedians attending this year’s convention, including voice actress Lauren Landa (BlazBlue series), manga artist Amelie Belcher (Loud Snow), funnyman Karl “Uncle Yo” Custer, and Powerglove, a heavy metal band that covers theme songs—everything from Inspector Gadget to Tetris. The biggest draw of the convention, however, might be video game composer Akira Yamaoka, who created the music for the Silent Hill series. 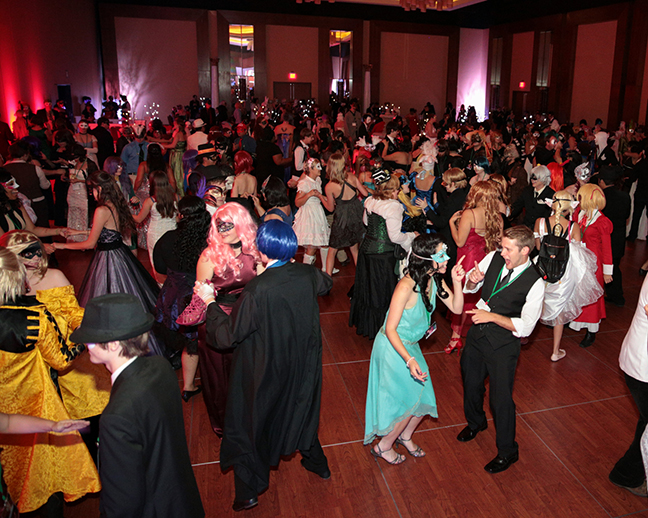 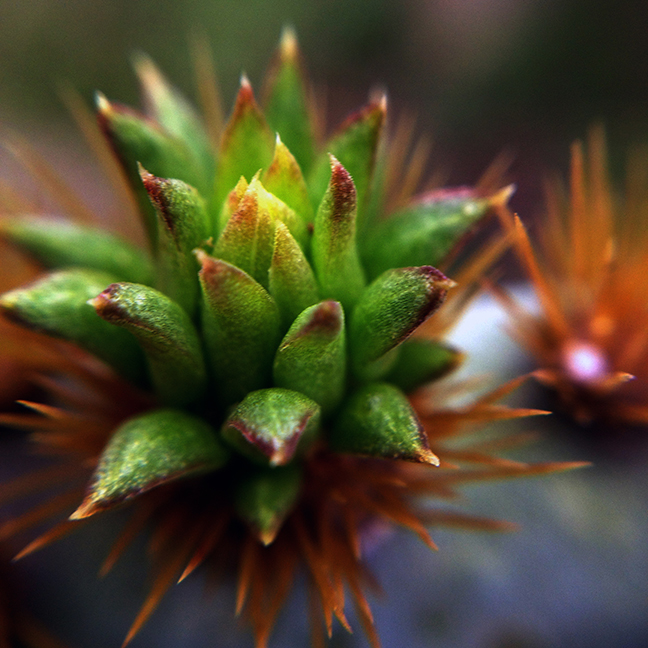 The Southwest School of Art offers viewers an annual snapshot of its ever-evolving talent pool with the wide-ranging “All-School Exhibition,” which fills both the Navarro and Ursuline campuses with works by students and instructors alike. Technically four exhibits under one umbrella, “All School” comprises a juried show highlighting projects created in the SSA studios, a graduation show for students who’ve completed certificate studies (Dinah Coakley, Archana Kapaleeswaran, Carlos Moreno and Mahalah Rood round out the 2014 crew), a show spotlighting the youngsters of SSA’s Teen Studio Intensive Program and a faculty show sure to do the Alamo City proud when it travels to the Rockport Center for the Arts in October. Following its public opening on Saturday afternoon, the School hosts an artists’ talk with featured certificate students at 6 p.m. Tuesday evening. Free, 2-4pm Saturday, Southwest School of Art, 1201 Navarro & 300 Augusta, (210) 224-1848, swschool.org. —BR 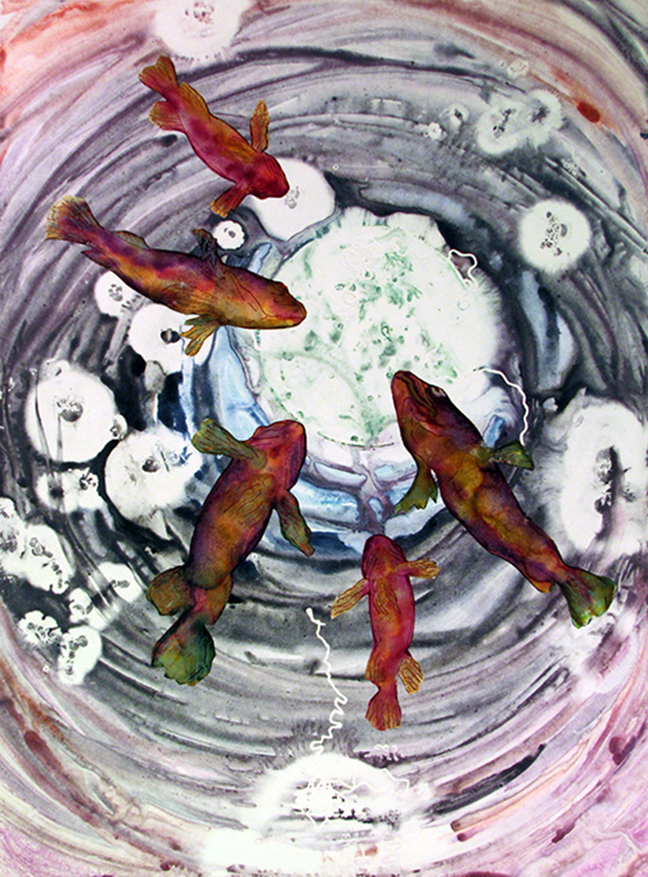 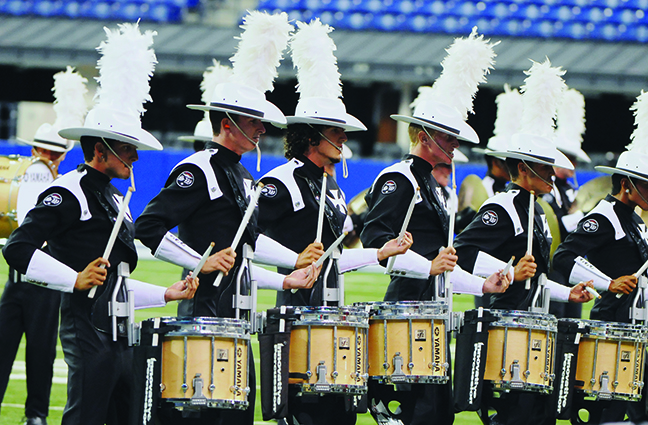 Self-described as “Marching Music’s Major League,” Drum Corps International is an Indianapolis-based nonprofit providing “a life-changing experience for youth through the art of marching music performance.” Active since 1972, DCI annually enlists upwards of 5,000 drummers and buglers between the ages of 13 and 22 for competitive summer tours across the U.S. and Canada. Landing at the Alamodome on Saturday, DCI’s all-inclusive Southwestern Championship features performances by all 22 corps with World Class status, including Texas’ own Crossmen (SA), Genesis (Austin) and Guardians (Seguin). $35-$65, 2:30pm Saturday, Alamodome, 100 Montana, (800) 745-3000, dci.org.—BR 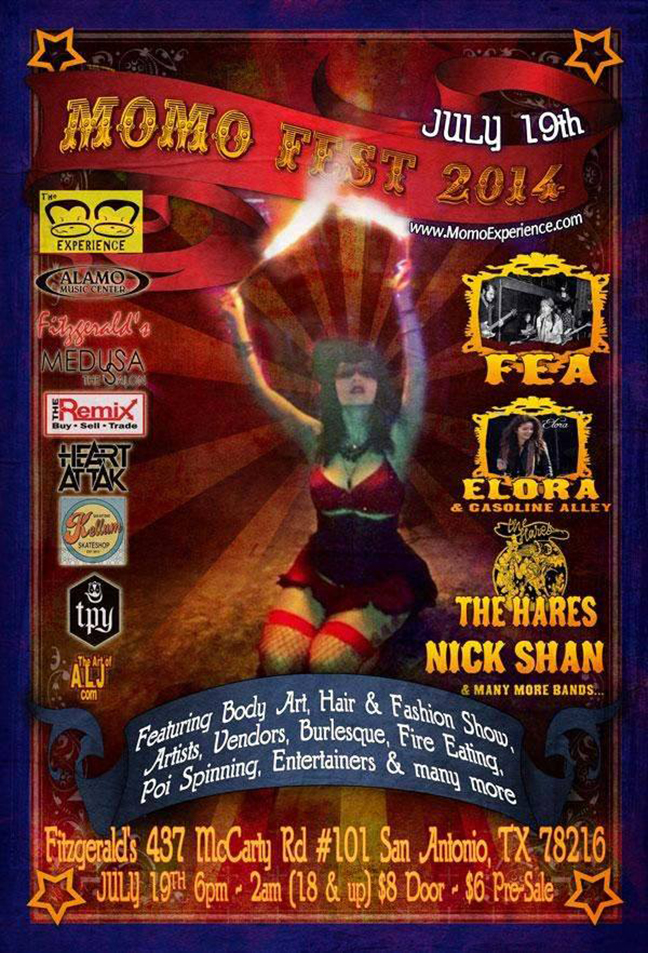 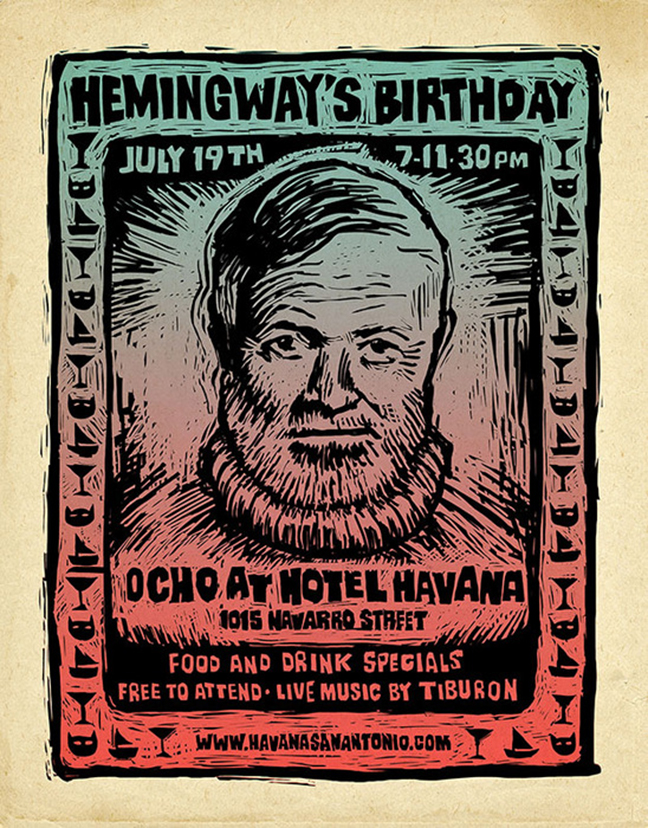 With his 1926 novel The Sun Also Rises, Ernest Hemingway introduced a minimalist, hardboiled writing style that helped establish him as a modernist icon. Beyond his influential works, Hemingway revolutionized the role of the American author while becoming an international celebrity, living the life of an adventurer, marrying four times and battling ultimately fatal inner demons. Inspired by his fondness for Cuba and cocktails, Ocho celebrates the legend’s birthday with themed food and drink specials and live music by Tiburon, with bar proceeds benefiting the San Antonio Library Foundation. Free, 7-11:30pm Saturday, Ocho, Hotel Havana, 1015 Navarro, (210) 222-2008, havanasanantonio.com. —BR 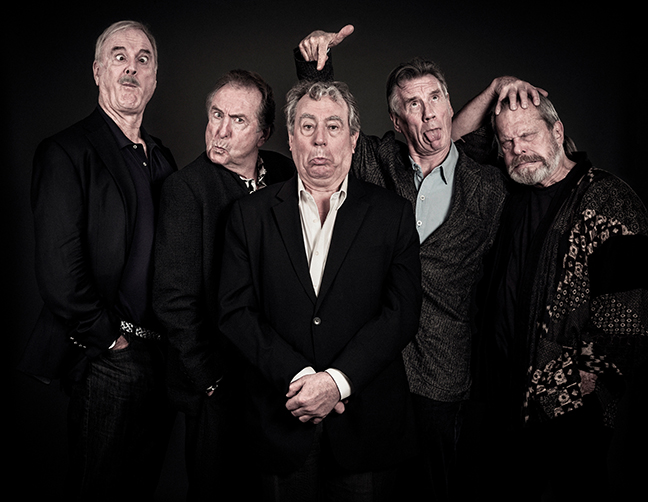 The Parrot Sketch. The Spanish Inquisition. The Knights Who Say Ni. Even if only secondhand, you know the hits by heart. And for a 10-show run, comedy’s Beatles, John Cleese, Eric Idle, Michael Palin, Terry Jones, Terry Gilliam, and—via archival footage—the late Graham Chapman (“One down. Five to go,” as the group’s website cheerfully reminds us) have put the band back together for what they claim will be the last time. If you can’t afford the trip to London, you can gather with the lumberjack-attired faithful at your local cineplex for a live broadcast of the final show. Nudge, nudge. Say no more. $18, 1:30pm Sunday, Regal Huebner Oaks Stadium 14 & RPX, 11075 I-10 W, (210) 558-0427, montypythonlive.com.—Jeremy Martin 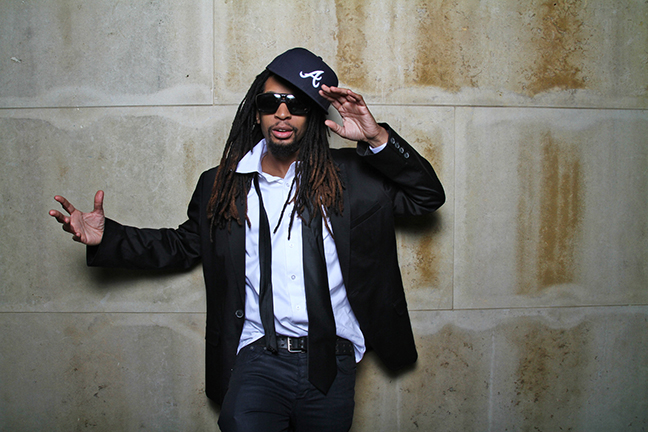 Did you know that rapper/pop-cultural icon Lil Jon is coming to Saytown on Sunday? What!? It’s the sizzling summer edition of 98.5 The Beat’s Beat Bash. Yeah! And the sure-to-be-turnt show also features legendary Nuyorican gangsta rapper Fat Joe and rising California rapper Sage the Gemini, among others. OK! Teasing aside, Lil Jon, star of The Apprentice seasons 11 and 13, has made quite the surprise hip-hop comeback with his recent smash hit with DJ Snake. Maybe you aren’t familiar with it? Just keep in mind, if anyone ever asks you to “Turn down,” you have a right to ask “For what?” $18-$73, 7pm Sunday, Freeman Coliseum, 3201 E Houston, ticketmaster.com. —James Courtney